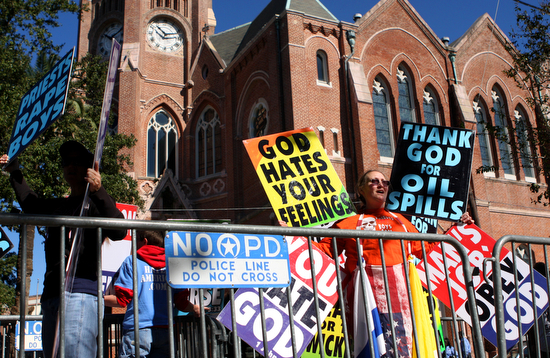 The Westboro Baptist Church’s unique brand of public vitriol has provoked everything from impromptu arguments to organized counter protests to Supreme Court cases, but it barely managed to raise an eyebrow Sunday morning among parishioners of St. Stephen Catholic Church.

Best known for preaching at military funerals around the country their message that support for homosexuality causes the deaths of American soldiers, the church’s schedule of protests in New Orleans this weekend focused on the Jewish Federation’s North America General Assembly downtown (the Topeka, Kansas-based church preaches that the Jewish faith, and thus the state of Israel, are both illegitimate). But the church also brought its anti-Catholic views to the doorsteps of several of the city’s churches, including St. Stephen on Napoleon Avenue. 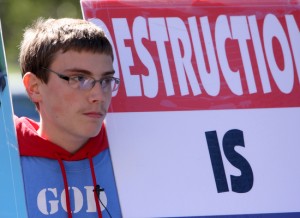 The group of about half a dozen protesters arrived in a minivan shortly after 10 a.m. and quickly set up their signs behind metal barricades they had requested in advance from the New Orleans Police Department. As parishioners began walking into the landmark church for the 10:30 a.m. Mass, Westboro members began castigating them loudly: “What is wrong with you people, walking into that whorehouse where priests rape children?” yelled Margie Phelps, daughter of church founder Fred Phelps.

Few parishioners even slowed their pace walking past. One man carrying a basketball away from the nearby courts pointed at Phelps’ sign and said “I disagree with that,” and she yelled her responses at his back as he walked away.

A half-block away, Franz Heldner leaned on his bicycle and watched the protesters. He’d attended the 8 a.m. Mass at St. Stephen, knew the Westboro church by its reputation, and came back to be on hand in case the protests became confrontational, he said. There’s some irony, Heldner said, in the wide variety of groups theh church targets: Jews and Catholics, gays and soldiers.

“They’re equal-opportunity haters and protesters,” Heldner said. “But I really object to the fact that they interrupt military funerals. That’s despicable.”

The Westboro group actually drew a small group of supporters, four members of the Twenty-First Century House of God in Loxley, Ala., who wore homemade T-shirts and stood in quiet support just outside the barricade set up for the Phelps. The Alabama group shares many views with Westboro, and the short two-and-a-half hour drive from Loxley to New Orleans made for a convenient rendezvous, said Prophetess Glynis Bethel. 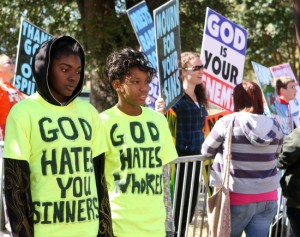 Members of the Twenty-First Century House of God in Loxley, Ala. protest in front of St. Stephen. (Sabree Hill, UptownMessenger.com)

“God sent us down to pray for these people. The police officers, they’re corrupt – the whole city has been given over to corruption,” Bethel said. “We’re just preaching against anyone who refuses to receive Jesus Christ as savior, and it just so happens the Jewish nation falls under that.”

The Westboro group incorporated singing into its protest, substituting its own lyrics into the pop songs of Lady Gaga, or transforming the hip-hop classic “The Roof is on Fire” into “The Pope is on Fire.” Giving the group a wide berth as they headed toward the church’s door, St. Stephen parishioners Jenn Johnston and Mary Chapman stopped before going inside, unable to resist asking who the protesters were. They’d never heard of Westboro or the Phelps, they said, but found a sort of baffling nihilism in their message.

“It almost sounds completely satirical, like they don’t believe in anything,” Johnston said, marveling at the sign that read “God Hates Your Feelings.”

“It’s like the people you see on Bourbon Street that say, ‘You’re doomed,’ but without the ‘Repent’ afterward,” Chapman said. “You’re just doomed.”

Though he said he only attends mass about once a month, parishioner Jeff Goldman took some issue with the fact that the protesters equated the misdeeds of some priests with all Catholics.

“The amusing thing is, I don’t think they quite grasp that the church is against homosexuality, too,” Goldman said. “I don’t know whether to argue with them, laugh at them or ignore them.”

Then, like nearly everyone else at his church Sunday morning, Goldman chose the latter option and headed inside. With their audience gone, the Westboro members slipped back outside the police barricades, packed their signs into the minivan and headed resolutely toward the next protest site.