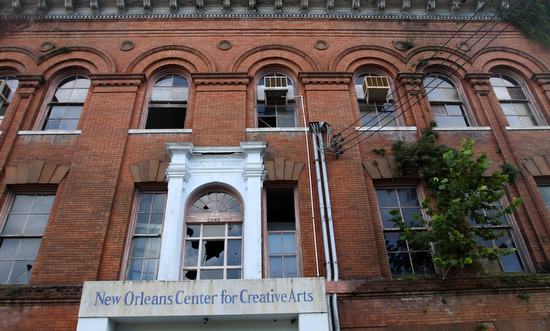 The fate of the former site of the New Orleans Center for Creative Arts remains uncertain after Lusher Charter School has decided not to purchase it.. (Sabree Hill, UptownMessenger.com)

Renovating the old New Orleans Center for the Creative Arts school into a third campus has proven too expensive an idea for Lusher Charter School amid the present uncertainty about public school funding, so school officials are restarting their search for a new Uptown location.

The low-end estimate of the price to refurbish the old NOCCA buildling on Perrier Street is about $10 million, Lusher CEO Kathy Riedlinger told the school board in a Saturday morning meeting. With her recommendation that the board cease investigating that option, it is effectively of the table, she said afterward.

Lusher has added two classes to its kindergarten that are temporarily being taught at the Jewish Community Center, but is searching for a permanent third campus in addition to its elementary school on Willow Street and high school on Freret. Meanwhile, the Orleans Parish School Board was planning to put the NOCCA site up for a second auction after a first round failed to draw a bid that met the state minimum, but Lusher became interested in the property and asked for time to study it.

While the price to restore the NOCCA building is high, another serious issue at play is the amount of school funding, Riedlinger told the board. The formula for how much each school receives per pupil from state and local tax dollars is set by law, and traditionally the figure had been growing by about 2.75 percent each year to accomodate rising costs.

That increase did not come this year, however, and Orleans Parish School Board officials recommended Lusher budget for the next five years without that increase also, Reidlinger said. While administrators at some schools were upset, Reidlinger said she was thankful that the state did not inflict on K-12 schools the far more severe cuts that higher education has been suffering.

Further, she worries that the law establishing the school-funding formula could yet be changed to make elementary and high schools vulnerable to similarly deep cuts.

“That’s the reason it causes me to be conservative in looking into jumping into buying a building that, in a conservative estimate, needs $10 million in renovations,” Riedlinger told the board.

Riedlinger did not suggst any alternatives to the NOCCA site to board members Saturday morning. She said after the meeting that the school has requested the Orleans Parish School Board help it find another expansion site, and that she still hopes it’s near the Willow and Freret street campuses, as NOCCA would have been.

Members of the Upper Hurstville neighborhood surrounding the NOCCA site had previously expressed concerns about Lusher’s interest in the property. The expansion would have likely come without any provision to give nearby children automatic admission into the sought-after charter school, so many residents felt they would be bearing the costs of hosting the school without any of the benefits.

“Most of the residents right next to the building were worried about traffic problems, construction problems, so they’ll be relieved,” said Upper Hurstville Neighborhood Association president Karen Duncan. “Having said that, we don’t know what’s next.”

Lusher has a reputation for being sensitive to its host neighborhood, Duncan said, so one concern now is whether another school, less attentive to the neighborhood’s needs, might move in next – though it’s not certain that any school could afford the renovation price tag. The neighborhood’s first choice for the site would be a residential redevelopment into about nine or 10 homes, she said.

Also at Saturday’s meeting at Lusher: 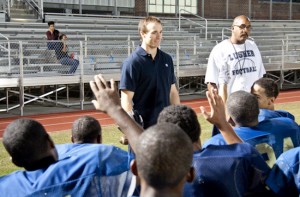 Saints quarterback Drew Brees speaks to the Lusher Lions during a recent practice. (via lusherschool.org)

The next board meeting is at 10 a.m. Saturday, Dec. 4 at the high school campus on Freret Street.