Traveling around the world has never been easier. All it requires is a stroll down Freret Street.

With the opening of the “Ethnographic Terminalia: New Orleans 2010” exhibition Friday night at the Du Mois Gallery, visitors can explore over a dozen countries all without crossing the parish line. 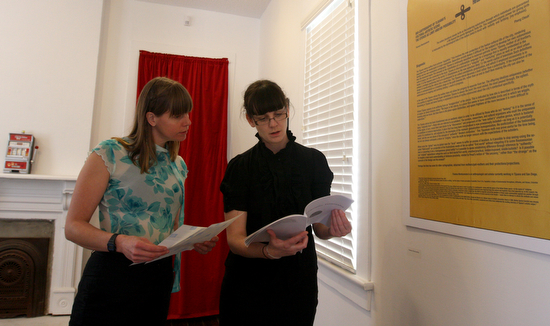 The exhibition coincides with this year’s annual American Anthropological Association (AAA) meeting, currently underway downtown. With thousands of scholars converging upon New Orleans this week to present their research on diverse places and cultures, the meeting has sparked a number of separate art-related events throughout the city, but this is one of the few to take place Uptown.

The exhibition, comprised of works in film, photography, collage, sculpture, and mixed media, features 22 artists from five countries. The idea for the show grew out of a series of conversations between artists and curators at last year’s AAA meeting in Philadelphia, said curator and researcher Fiona McDonald. The first task was to secure the participation of artists who would make a signal contribution to the show, artists such as Susan Hiller, Robert Willim, and Fiamma Montezemolo. “After we had our anchor artists on board,” McDonald said, “we sent out a call and got the most incredible response. ”

The curators approached the Du Mois Gallery last winter with their idea. Gallery owner Renee deVille recalled that she and her husband, co-owner Jean-Paul Villere, were initially unclear about what the exhibition would entail. The gallery had opened only recently, so they weren’t sure how comfortable they felt handing their space over to an outside group. But they were soon won over by the idea: “On faith, we said yes,” deVille said. 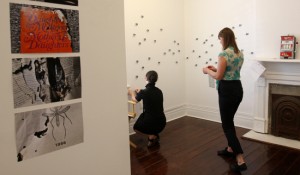 Then, this past summer, the curatorial work began in earnest. It took several months to select the pieces and decide on their arrangement within the gallery, given that the curators were all based in different cities, but despite the challenges of working remotely the core vision for the exhibition never wavered. “We were interested to see how visual media, art, and anthropology come together in a particular space,” McDonald said.

Co-curator Trudi Lynn Smith, who is exhibiting a piece of her own work, echoed this sentiment, noting that the intersections between academic and artistic practice have long inspired her both as an artist and a curator. “We hope to be testing and challenging the disciplinary borders between anthropology and art,” she said.

While many of the pieces in the show engage with places around the world, such as Norway, South Korea, and Greenland, other works focus on the Crescent City. Willim’s piece, “Elsewhereness: New Orleans,” undertaken with Anders Weberg, explores the idea of travel to New Orleans by collecting sounds and images from the Internet and reassembling them into a surreal, dreamlike multimedia presentation. In the next room, Jenn Karson’s piece “Scoring the Streets of New Orleans” features dozens of miniature wind-up music boxes imprinted with the sounds and fragments of music she collected during a walk along Bourbon Street on New Year’s Eve in 2004. Visitors are encouraged to interact with the installation, McDonald said, and to wind up the boxes to release the sounds inside them. “We’d love to hear a cacophony in here.” 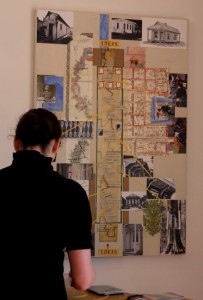 Fiona McDonald stands in front of "Shotgun" by Patricia Tusa and Don Fels. The piece examines the ideas, skills and history that came together to create shotgun houses. Photo by Sabree Hill (UptownMessenger.com)

deVille agreed, noting that this kind of creative interaction with the gallery is just what they had hoped to encourage, and will reappear in future exhibitions. Their entire 2011 calendar is already booked.

“This will hopefully be an ongoing theme for us, to have professional organizations come in and use our space,” she said.

“This is bringing something interesting and cultural to the Freret corridor.”