Local artists, Uptown restaurants and two days’ worth of Louisiana musicians are throwing a block party this weekend in support of Uptown police – literally at their front door.

The second annual Magazine Street Blues Festival will run Saturday and Sunday at the intersection of Magazine Street and Napoleon Avenue, filling the neutral grounds with artists and Lafayette Square with a stage for musicians and tents for food and beverage vendors, said organizer Shelley Rote. Games and activities will be set up for children, and attendees can participate in either a silent auction or a raffle to benefit the department.

The Soul Rebels will headline Saturday evening, and a big-screen TV will broadcast the Saints game on Sunday.

“It was very well attended last year, but it had a real neighborhood feeling to it,” Rote said. “It feels like a block party.”

The festival is a new fundraiser for COPS II, a nonprofit organization that provides support for NOPD’s Uptown-based Second District in a number of ways. It recognizes outstanding work by individual officers through its award program, but its members also contribute substantially to make up for funding shortfalls in the department, buying furniture for the aging Second District station, supplies, equipment and even computers for the officers.

The Blues Festival has a slightly different purpose, to support the officers directly. The money raised through artist and restaurant booth fees and through drink sales will pay for specialized training to help officers on the job, as well as providing trauma counseling, family therapy or similar needs they may have in their personal lives, Rote said.

Police also see the festival as a way to interact with the Uptown community, part of the entire department’s renewed emphasis on creating a strong bond with residents, said Second District commander Capt. Darryl Albert. Albert, whom new Superintendent Ronal Serpas transferred from the city’s SWAT Team to lead the Second District in June, said his old colleagues are bringing some of their specialized equipment such as the sky tower to show off.

Last year’s festival only lasted one day, but its strong attendance prompted organizers to expand to a second day, doubling the festival’s fundraising potential and cutting in half the chance that rain could ruin it, Rote said. 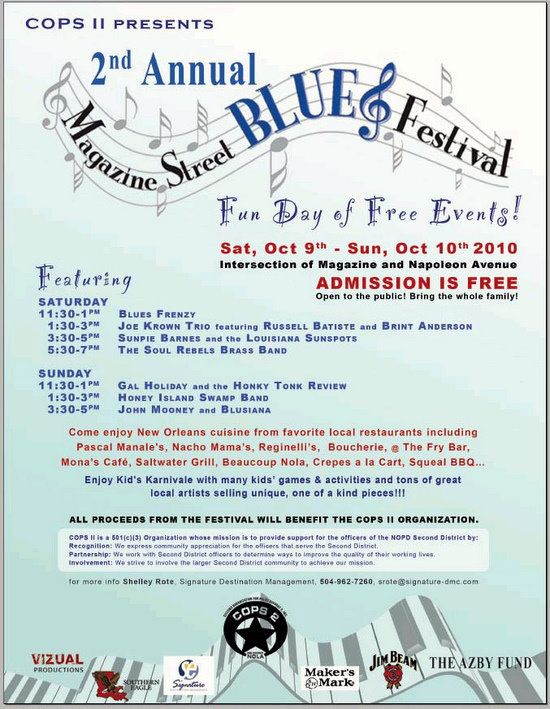 One thought on “Magazine Street Blues Festival returns this weekend”