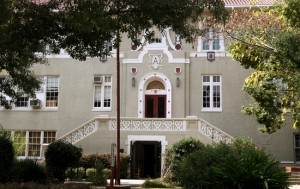 The facade of Audubon Charter School's Broadway campus will remain essentially unchanged after renovations, which will add 10,000 square feet of new space to the rear of the building.

Upcoming renovations to Audubon Charter School’s Broadway campus will add substantially to the building’s size, and the unsettled question of exactly how that addition will be configured was the subject of vigorous discussion Monday night at the school.

The school’s 10,000-square-foot expansion will be situated toward the rear of the campus, leaving the view of the historic school building nearly unaffected from Broadway Street, said architect Ron Blitch of Blitch/Knevel architects. The new portion will mostly face Pine Street and could be either a primarily one- or two-story building, a choice that dominated most of the evening’s discussion. 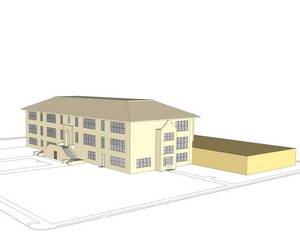 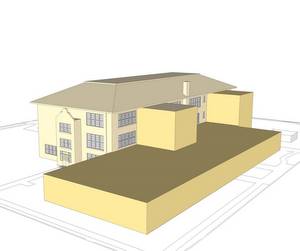 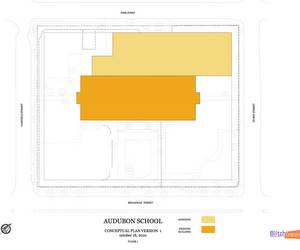 Fire codes require that kindergarten and pre-K classrooms be placed on the ground floor, said Jules Lagarde, design manager for Jacobs/CSRS, an engineering and architecture partnership managing the renovation. To fit enough classrooms to accomodate Audubon’s current kindergarten population on the ground floor – plus a cafeteria – the architects have proposed a long one-story addition that runs along the back of the existing building and extends beyond it on the Hurst Street side toward the corner.

An alternate configuration would keep the addition aligned with the current building as a two-story structure – retaining more green space on the campus – but it’s questionable whether the first floor would be large enough for all the needed classrooms at the proper sizes, Blitch said. Large renderings showed – in rough geometric shapes without any architectural details – the amount of three-dimensional space on the Audubon campus the additions would take.

Both options have the same amount of floor space and would contain the same total number of classrooms. But the distinction between the preferable form of the two-story structure versus a more functional one-story expansion resonated across a cafeteria full of more than 50 parents, teachers, students and neighborhood administrators.

Dewayne Wilson noted that he has no children at Audubon, and that he prefers the look of the two-story solution. At the same time, he understands that the school’s needs ought to be met by the renovation, he said.

“If one story suits the needs of the program, I’m OK with that, as long as you don’t go two story all the way to the corner of the lot,” Wilson said. “When you run it all the way out to the street, you might as well live in the CBD.” 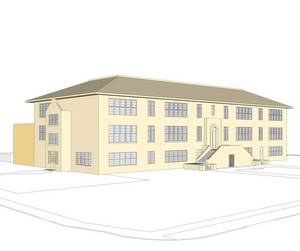 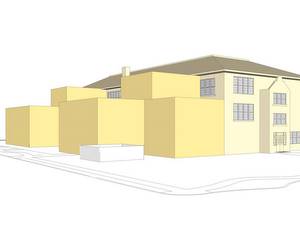 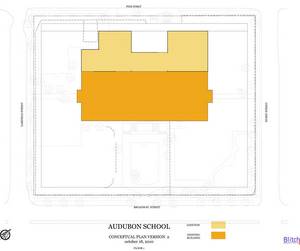 To gauge the overall sentiment of the room, Lagarde asked for a show of hands of those favoring each option. With many people in the room not voting, he counted 15 for the single-story expansion, and 10 for the two-story option. Suggesting that margin was too close to base a final decision on, Lagarde said his firm will continuing studying options and perhaps schedule another meeting on that topic alone.

One notion repeatedly dispelled through the evening was the purpose of the renovations, which are intended merely to give more room to the students already in Audubon – not create space for new students. The school’s classrooms are far smaller than are required by the state, Lagarde said.

“We’re not adding more students. We’re adding space to correctly accomodate them,” Lagarde said. “This is one of the most unique projects we’re dealing with. You have a very successful school in an old building, and now you’re putting Master Plan standards on top of it.”

The renovations raised other issues in the room as well. Both of the proposals would remove a small, two-story outbuilding known as the caretaker’s cottage that sits where the expansion would need to go, a notion that raised a few eyebrows. “I’d like to see what the sense of the community is regarding the cottage,” said John Lafargue, president of the adjacent Upper Audubon Neighborhood Association. “It’s part of the original design.”

Jennifer Harrison, an Audubon teacher, said the new classroom space would likely be much more functional than the caretaker’s cottage.

Part of the renovation will add three new vertical structures on the back housing fire-code-compliant stairwells, new bathrooms and elevators. That will render two sets of stairwells inside the building somewhat redundant, but Lagarde said the state may require they be retained for their historic value as adding character to the building. The renovations are being paid for through federal tax money awarded by FEMA to the school system, but FEMA will only sign off on the plans if it preserves all the building’s historic elements, Lagarde said.

“If I don’t keep the stairs, they don’t pay the bills,” Lagarde said.

Parking and access to the building remain major concerns. Some attendees discussed asking the city to make Garfield and Hurst streets on either side of the school one-way to smooth traffic, and Lagarde said that is a possibility – the streets are too narrow for two-way traffic anyway, he said. He rejected adding parking on the campus, however, because it would come at the cost of the children’s outdoor play areas.

“I imagine the staff here finds spots around the community and shoehorns themselves in, and everyone just gets along,” Lagarde said. “I don’t want to take any more green space away from the kids.”

Two neighborhood association presidents, Lafargue and John Stockmeyer of the Uptown Triangle Neighborhood Association, said that they’d only learned of the expansion plans this week and requested better effort be made to communicate Audubon’s plans with those who live around it. Lafargue also said he is concerned that the school grounds are simply too small to house its dual missions of French immersion and Montessori instruction, no matter what is added.

Lagarde replied that such a decision would be the school board’s, not the engineers’, but the present building can only reasonably accomodate about 150 students.

“I don’t think it’d be feasible if we ended up saying, ‘Stay in this building,'” Lagarde said. “At that point, it becomes very inefficient to operate a school at the 150-student size.”

The bulk of the construction will begin after this school year ends and take most of two years, allowing students to return to the Broadway campus in the fall of 2013. No interim home has yet been found for the students by the Orleans Parish School Board, which oversees Audubon’s charter, but Lagarde said his firm is working steadily to get that accomplished.