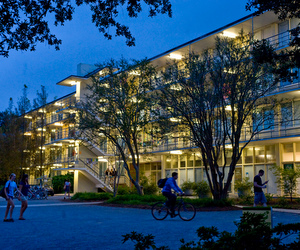 A New Orleans City Council committee rejected a proposal to generate significant amounts of electricity from solar panels on the roofs of Tulane University dorms, saying in a Tuesday morning meeting that the city first needs a better overall system for regulating new, independent sources of energy.

Current regulations allow two different levels of power generation from solar panels: 25 kilowatts from residential customers, and 300 kilowatts from commercial structures, said Matthew Fraser, legislative director for District A Councilmember Susan Guidry. If each room in Tulane’s dorms were to be classified as an independent residential unit for the purposes of solar power generation, that would far exceed the current limits, and a new designation would be needed.

Under a concept known as net metering, independent generators of electrical power like Tulane can sell their excess electricity back to Entergy. Entergy has told the city that this process still incurs transmission costs to the utility, however, and if Tulane was generating its own energy, the new transmission costs could get passed on to customers around the city.

Having just finalized an agreement on a rate decrease with Entergy earlier in Tuesday’s meeting, the members of the council’s utility committee said they were loathe to make any exceptions that might increase energy costs. Instead, they insisted that a broader solution be found to encourage solar-power generation without passing on cost.

“How do we facilitate the Tulanes of the world, the hospitals, the individuals? How do we encourage them to create and sell to us, the rate payers, their alternative energy in a way that doesn’t overburden the rest of the ratepayers for the distribution lines?” asked District B Councilwoman Stacy Head. “If Tulane creates a lot of energy through solar and they want to sell it to Entergy, that’s great. But the problem is, they need to pay a portion of the distribution lines to sell it.”

The original request to change the rule came from an independent architect, and on Thursday, Tulane spokeswoman Kathryn Hobgood Ray clarified that the university has no current plans for solar energy. “If we were to pursue solar generation, it would be on a demonstration basis,” Ray wrote in an email. “We do not, however, currently have a building project with a solar installation planned for implementation.”

Forest Bradley-Wright of the Alliance for Affordable Energy urged the committee to defer its decision on the net metering concept, rather than rejecting it, to avoid an “unfavorable signal” about the city’s position on solar energy. Further, as the city embarks on drafting its new Integrated Resource Plan to answer these questions, Bradley-Wright suggested the council seek advice from the solar energy industry – not just Entergy.

“You need the expertise of the solar industry,” Bradley-Wright said. “They are here. These are businesses vested in New Orleans and Louisiana, and they bring technical expertise that will be very valuable in your deliberations.”

Ultimately, the council said any policy about independent solar generators will be better handled in the resource plan.

“The way that it was asked, the answer has to be no,” Guidry said of the Tulane idea. “We should ask the question in a broader context that allows for things like the Tulane power generation.”

“There’s no limitation on Tulane coming back in a month or so,” said Councilwoman Cynthia Hedge-Morrell, the committee chair. “We have to figure out how to do it going forward. We’ve been trailblazers since Katrina on a number of things, and I don’t see why can’t be trailblazers on this too.”

[Clarification: An original version of this article was unclear about the status of Tulane’s involvement in solar energy. This version has been updated with the source of the original request and the comment from the university spokeswoman.]