Officers and investigators confer after a crash (at left) near the corner of Fig and Dublin streets in Carrollton. (Sabree Hill, UptownMessenger.com) The car ended in front of a home just off Carrollton. (Sabree Hill, UptownMessenger.com)

The shooting took place around 6:30 p.m. near the intersection of South Liberty and St. Andrew streets, said NOPD Officer Janssen Valencia in a news release. Responding to reports of gunfire, police found a 23-year-old man shot multiple times, and he died at the hospital, Valencia said.

The victim had been gunned down by three men in a silver vehicle that fled after shooting him, investigators learned, but two Orleans Parish Sheriff’s deputies heard the shots and saw the car speeding at the intersection of South Liberty and Josephine streets, Valencia said. NOPD officers then joined in the chase, which headed Uptown until the driver crashed into a home at the intersection of Fig and Dublin streets.

One of the men in the car, later identified as 25-year-old Joseph Peters (last of 7809 Olive Street), got out of the car and began to remove a gun from his waistband, but a police officer stunned him with a Taser and arrested him, Valencia said.

The other two people in the car ran into the neighborhood, and police got word that one, later identified as 21-year-old Derrick Allen (last of 3284 Bloomingdale Court), was hiding on the roof of a house in the 8100 block of Apricot Street, where he surrendered without incident, Valencia said.

Peters was the driver of the car and Allen was in its front seat during the shooting, homicide detectives said. The third man in the car remains unidentified. Both Peters and Allen were booked with first-degree murder.

NOPD Superintendent Ronal Serpas praised the arrests as “the outstanding work of alert and dedicated officers, who responded quickly to a crime in progress.” 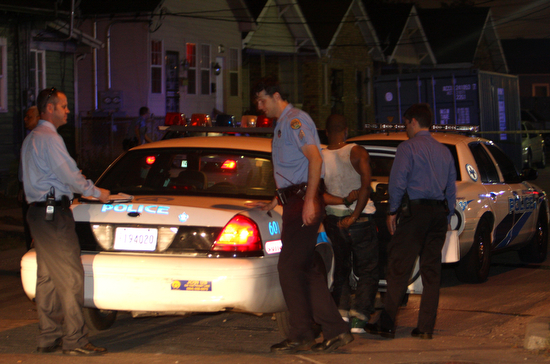