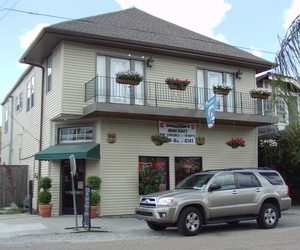 Singleton's Mini Mart, at the corner of Garfield and Millaudon streets in the Black Pearl (Robert Morris, UptownMessenger.com)

After a six-month investigation culminated in raid police say yielded three pounds of marijuana and nearly $14,000 in cash, the New Orleans Police Department is now seeking to seize the Black Pearl convenience store where the drugs and money were found, authorities said.

The owners of Singleton’s Mini Mart protest that they have nothing to do with drug sales, however, and neighborhood residents are left with mixed feelings about the store.

New Orleans police first received a tip about drug sales at the store over the Crimestoppers hotline back in February, and began investigating the case through informants on the streets, said Sgt. Sammy Palumbo of the NOPD Second District. After an undercover agent managed to purchase marijuana inside Singleton’s, police obtained a warrant to search the store, Palumbo said.

On Aug. 5, police swept into the store and found three pounds of marijuana (roughly $13,000 worth, based on a police estimate of marijuana’s street value), a shotgun, an assault rifle, a handgun and $13,848 in cash, according to a news release from the following day. Owner Bau Nguyen, 49, and his wife, Lua Nguyen, 46, were both arrested, as was a third man, 38-year-old John Bias, who was in the store making a drug transaction at the time of the raid, Palumbo said.

Of the nearly $14,000 in cash seized, only about $300 was from the register, Palumbo said, and “the rest was easily identifiable as proceeds from drug sales,” he said. The Nguyens rarely sold less than an ounce at a time and were unlikely to sell to strangers, but weren’t particularly secretive when selling to people they knew, Palumbo said.

“If they knew the guy, they did it right out in the open, over the counter,” Palumbo said. “It didn’t really matter if customers were in the store or not.”

Sitting on the corner of Garfield and Millaudon streets, the building consists of the store downstairs and a two-bedroom dwelling upstairs where the Nguyens live, police said. The Nguyens made bond after their arrest, and the store remains open as the case proceeds. On a recent Friday afternoon, as they served po-boys from behind the counter, they complained bitterly about the police raid.

The drugs, Bau Nguyen said, belonged to Bias, the third man in the store at the time. Police were chasing him, he ran inside, and when the officers caught him there they accused Nguyen of being involved, he said: “They said this is my store, so I’m responsible,” Nguyen said. Nguyen characterized the seizure of the money in the store as theft, repeatedly describing himself as being “robbed by the NOPD.”

“We’re not that kind of people,” Bau Nguyen said. “I never thought the NOPD would steal from people, but now I believe it. … I get so angry when I think about it.”

Nguyen said he believes the police targeted him because the neighborhood does not like his store. “There’s certain things I cannot control outside of here,” he said.

Just down the block from Singleton’s, a small group of people sat talking in a shady spot on the sidewalk. One of them, Troy Taylor, said he did not believe that the Nguyens were selling drugs.

“Police work off whatever they hear, and maybe they got a call,” Taylor said. “I never go in there and see people selling drugs. In 40 years, I never saw drugs come out of that store.”

Other neighbors, however, complain about the store, particularly about people loitering outside it, said John Stockmeyer, president of the Uptown Triangle Neighborhood Association. In a phone interview this week, Stockmeyer described the store’s impact on the neighborhood in relative terms.

“Has it been a problem? Yes,” Stockmeyer said. “Has it been one of our primary problems? No.”

On one hand, Stockmeyer said, the store is well kept and relatively quiet. He drops by several times a week for lunch, and he said that the Nguyens have proven helpful turning in some dangerous characters roaming the streets.

On the other hand, it has an alcohol license, and a handful of people congregate outside in the mornings drinking, Stockmeyer said – but they typically leave after a while, and usually clean up after themselves. Many bars in the area have been bigger nuisances, he said.

“If they did not sell package liquor, that would be better,” Stockmeyer said. “But it’s not a concern where people are outside, drinking by the dozens, and throwing their bottles on the ground.”

The neighborhood’s most significant problem, Stockmeyer said, is the repeated gun battles on Hillary Street, which he said were caused by a separate feud completely unrelated to anything at Singleton’s Mini Mart. Yet, after those gun battles, the Singleton’s case is probably the “second biggest” public-safety concern for Black Pearl residents, so much that he expects those two topics to dominate the police portion of the neighborhood association’s Oct. 20 meeting at Benjamin Banneker Elementary.

Nguyen expressed confidence that Singleton’s will remain open, but the store’s fate likely lies in the court system. Both the cash seized from him and the property itself now have forfeiture actions pending through the district attorney’s office, said NOPD Capt. Mike Glasser, who oversees the department’s asset forfeiture section.

“If the forfeiture is successful, it will become the property of the city of New Orleans,” Glasser wrote in a recent email. “I can’t tell you at this time what the eventual destiny of the property will be.”