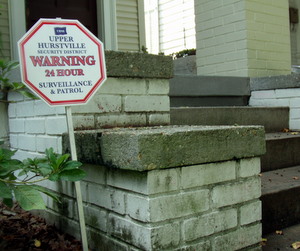 If an eleventh-hour do-over makes it through state government by the end of this week, votes cast regarding the Upper Hurstville Security District in the Oct. 2 election will not be counted and the ballot question will be moved to Nov. 2 in slightly altered form.

The security district — which uses a $485-per-parcel fee to provide around-the-clock security patrols from Magazine to Prytania, between Nashville Avenue and Audubon Park — was created by neighborhood voters in 2003 for a seven-year term, and thus needed renewal this year.

Late last week, however, district chair Karen Duncan discovered that the ballot question as worded would effectively raise the fee to $650 — rather than merely giving the district board that option if the needed arose — and moving the election date emerged as the only solution.

Duncan said she was seeking the exact wording of the ballot question from District A Councilwoman Susan Guidry’s office last week when she noticed the problem. The actual question reads, “Shall the City of New Orleans levy an annual parcel fee … in an amount of six hundred fifty ($650) annually for eight (8) years … ?”

The original state law, however, reads that “the fee shall not exceed six hundred fifty dollars per year,” and that “the amount of the fee may be changed by duly adopted resolution of the board, not to exceed the maximum amount.” This, Duncan, said, was the board’s intent for this election as well – that the board have the ability to set the fee at $650 if necessary, but for the present to continue it at its current rate of $485, or perhaps even lower it.

Duncan said the city presented two options. First, they suggested leaving the ballot question as written, but simply continuing to collect the old $485 fee anyway, in effect hoping to rely on some wiggle room that might be supportable by a legal opinion. Duncan said she found that idea unacceptable, and thought Upper Hurstville voters would as well.

“I’m not going to tell these people not to believe their lying eyes,” she said.

The second, more complicated option was to correct the language and move the election. It would take three steps: approval by city council, approval by the state bond commission in Baton Rouge, which governs all tax-related issues, and finally receipt by the Secretary of State’s office by Friday’s looming deadline for placing questions on the November ballot.

If successful, Nov. 2 will be the third election date this year on which Upper Hurstville has attempted to ask their ballot question. The original state law creating the district required that ballot questions about it be placed on mayoral elections – when turnout in the city is typically high – but city officials this spring were unable to get the correct language submitted to the state in time for that election. State Rep. Neil Abramson then changed the law to allow elections on other days, and the Oct. 2 date was chosen in order to give the tax assessor’s office ample time to get the fee on next year’s tax bills.

“I’m beside myself I’m so aggravated,” Duncan said, noting that City Hall blamed the error on an employee who had been held over from the Nagin administration and has since been released. “But in fairness, they are bending over backwards to fix this.”

The city’s communications office has not responded to questions sent this week about the Upper Hurstville issue, but the council made canceling the Oct. 2 ballot question and placing it on the Nov. 2 ballot its first priority Thursday morning. At Guidry’s request, the items were placed on the agenda and passed unanimously within 10 minutes of the meeting’s start, without any discussion or explanation.

If a certificate from the state bond commission is delivered to the Secretary of State’s office by Friday, the Nov. 2 date will be secured, said Jacques Berry, a spokesman for the office. In the meantime, it is too late to remove the ballot question from the Oct. 2 ballot, so Upper Hurstville voters will still see it, he said.

While Berry could not recall a similar instance of a ballot question being disqualified, he said when candidates withdraw after their names have been already printed on the ballot, votes for them simply do not count. “We don’t even tabulate them,” Berry said. A similar process is likely in Upper Hurstville, he said: Oct. 2 voters will see a notice in their polling place that the ballot question has been canceled and thus not to vote for it, and any votes cast on the question will simply be ignored.

This is effectively the last chance for the district, Duncan said. Even if the question could be placed on a later ballot – and if the district’s reserve funds could pay for patrols until that point – Duncan said she’s unclear whether the district would have the authority to spend it after the end of this year.

“We only have one opportunity to collect this fee,” she said. “I don’t even know that we would be authorized to do anything.”