The next planned expansions of the city’s streetcar system were decried by city council members Tuesday as shortsighted and impractical to New Orleanians, particularly commuters from Uptown neighborhoods, though administrators said it is likely too late for any changes now.

A $45 million transportation grant out of the federal stimulus program, one of the largest awarded anywhere in the country, will pay for a new streetcar line from Canal Street down Loyola Avenue to the Union Passenger Terminal, uniting the city’s buses and streetcars with Greyhound passenger liners and Amtrak trains. The Loyola Avenue project is actually the first of three downtown-area expansions; the RTA expects to hear in October whether it received another $75 million to help build a line down Rampart Street into the Marigny area and a loop around the convention center.

The selection of a loop around the convention center drew fire Tuesday morning from Councilwoman Stacy Head, whose district B covers much of the Uptown, at a meeting of the city council’s transportation committee.

“The convention center route sounds like it might be kind of interesting, but this is not for transportation,” Head said. “Instead of focusing on a third good transportation route, we instead went for the Disneyworld route, which is around the Convention Center. There are no real people, New Orleanians, who are going to ride that.”

Further, the Loyola Avenue route might spur some development downtown, Head said, but because it dead-ends at the terminal rather than traveling three blocks down Howard Avenue to join the St. Charles line, the new route realizes only a quarter of its potential.

“A short Loyola route isn’t that great … If I were living anywhere Uptown, or Broadmoor, any of those neighborhoods, it’s not going to help me. The only way to make it a true transportation improvement is if Howard Avenue connected to the St. Charles line,” Head said. “We left off the little tail that’s necessary to make the dog wag.” 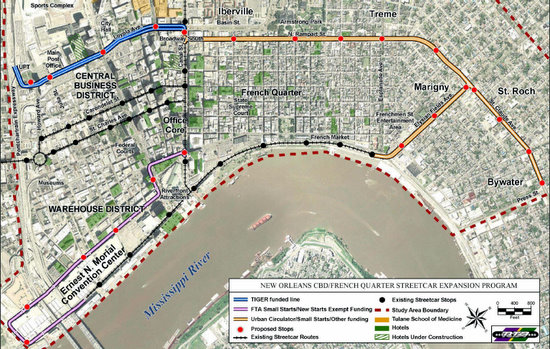 Map of the three phases of the streetcar expansion (via NORTA.com)

The Howard Avenue route was initially examined, but it had a number of problems that made it difficult to include in the federal grant, said Winsome Bowen, a manager with the contracting firm that prepared the first set of federal grant applications. The road lacks enough space in its neutral ground, and the RTA would have to acquire property and relocate utilites, she said.

Justin Augustine, CEO of the New Orleans RTA, said that because the grants have already been submitted, there is no opportunity now to change them. A Howard Avenue link could be included in future expansions, he said.

“We would love to give the city of New Orleans all the streetcar routes it used to have in the 30s and 40s. That would be our ultimate dream,” Augustine said. “Everybody wants to have additional streetcar routes.”

When Augustine mentioned other possible routes around the Superdome entertainment district, Councilwoman Kristin Gisleson Palmer criticized him for focusing on tourism rather than commuters. The committee is “not pleased,” she said, because the expansion plan does not make logical sense.

“If the convention center line was truly meant to connect the residents and the citizens of New Orleans to the workplace, I feel it probably would have gone down Poydras, or gone out towards where people actually live, as opposed to down Convention Center Boulevard,” Palmer said.

The Convention Center route was an idea suggested by the tourism industry that Councilwoman Jacquelyn Brechtel Clarkson said she supported, but only after more substantial improvements were finished, such as routes down through the Bywater. Through her career, she said, the streetcar expansion process has suffered from a lack of vision.

“We’ve missed some great opportunities by not master planning this whole idea,” Clarkson said. “Let’s not make those stupid mistakes again. It’s gone on 21 years for me, and I haven’t seen enough streetcar lines. I’m grateful for the ones we have back, but we could have had more.”

One thought on “Streetcar plans draw sharp criticism from council”