Uptown residents fill the pews of a Carrollton church as District A City Councilwoman Susan Guidry leads a meeting about recent flooding problems.

The street flooding that Uptown residents have repeatedly suffered through of late may never completely stop, but officials pledged at least to keep it out of people’s homes and reduce the traffic problems it causes.

Some parts of Uptown are so low-lying that they collect water from other neighborhoods during heavy rainstorms like those that flooded many Uptown streets in late August and early September, officials said. The city’s pumps can only flush a certain amount of water per hour, and they can be hampered by clogged drains at the street level, officials said.

“No matter what, we’re at or below sea level in many places,” said District A Councilwoman Susan Guidry, who organized the Thursday-night meeting at Central St. Matthew United Church of Christ on Carrollton Avenue, and acted as both emcee and interviewer of the city and federal officials who spoke.

But a number of major projects are intended to move the water out of those low-lying areas more quickly. The city is also creating programs that will anticipate flooding before it occurs and thus control it better, as well as foster better water-management practices on individual properties.

“With smart water management … we can figure out how to let the water land where it wants to land and stay there,” said city public works director Robert Mendoza.

During a storm, the city’s pumps have the capacity to pull an inch of rainfall off the streets in the first hour – while the drains and canals are filling up – and half an inch every hour after they are full, said Joe Becker, superintendent of the city’s Sewerage and Water Board. The Sept. 9 storm, for example, brought three inches of rain in an hour, which simply takes time for the pumps to move.

The city has more than 85,000 catch basins, but a majority of those Uptown were cleaned after Hurricane Katrina, Mendoza said. Cement runoff from reconstruction projects and residents’ grass clippings and blown leaves are two the primary culprits causing them to clog up again, but that’s also part of the drains’ intent.

Paving projects that have added too much asphalt to the mouth of the drains have also contributed, but Mendoza said the city has caught most of those instances and directed contractors to correct them. Next year, he said, he hopes to see the city increase its budget for drain maintenance. 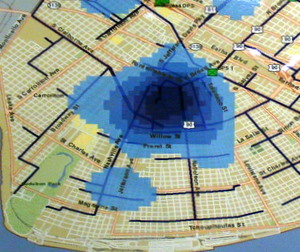 This map, on display at Thursday's meeting, shows repeatedly flooded properties as identified by the National Flood Insurance Program.

The city is also crafting a drainage master plan, Mendoza said, that should improve its response to flooding. It is building a computer modeling system that should be able to take real-time weather data from around the city and use it to calculate which individual streets are most likely to flood, allowing the officials to warn residents before the streets fill up and deploy traffic police to help motorists navigate around the flooded areas.

The long-term plan to improve drainage around the city is through the SELA projects, which will create major drainage improvements on Jefferson, Napoleon and Louisiana avenues from Claiborne nearly to Tchoupitoulas that should help drain the entire Uptown, said Stan Green of the U.S. Army Corps of Engineers. Construction should start on Napoleon Avenue by March, and continue for three or four years, he said.

The city’s ultimate goal is to keep floodwater out of anyone’s home, Mendoza said, but it will take the cooperation of homeowners as well. Experiments are being conducted around the city to determine what practices are most effective at minimizing the amount of runoff from individual properties that makes it into the streets and the drainage system.

“When the system is overburdened, topography has more effect on the drainage system than anything else,” Mendoza said. “If the water level is higher than the geographic level of the street, you’re going to have flooding. There’s not a strategy that’s going to work.”