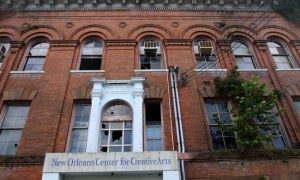 The fate of the former site of the New Orleans Center for Creative Arts remains a concern for Upper Hurstville residents.

The possibility of Lusher Charter School expanding into the shuttered former Uptown site of the New Orleans Center for Creative Arts brings mixed feelings in the surrounding neighborhood, and the balance of opinion may rest on whether local children could gain attendance privileges to the popular school.

The Orleans Parish School Board had previously put the old NOCCA building up for auction, but it failed to draw a legally high-enough bid, Upper Hurstville Neighborhood Association president Karen Duncan told a crowd of more than 50 residents at a Sunday evening meeting. The law was then changed to allow the school board to sell it for less, but before a second auction could be held, Lusher Charter School expressed interest in expanding to the site and asked the school board for time to study the possibility, Duncan said.

“A lot of people will be happy to see Lusher expanding” and to see the site returned to life, Duncan said, but immediate neighbors to the campus have concerns about traffic and the impact on property values on the area.

One serious point of concern at the meeting was the fact that Upper Hurstville is well outside of Lusher’s attendance district, which is on the opposite side of St. Charles Avenue and the universities. That fact was not included on a opinion survey the neighborhood has started circulating, as Duncan said neighborhood officials didn’t want to sound like they were introducing a slant against the school.

Some audience members Sunday afternoon, however, said that information made them essentially want their surveys back, as their initial support for Lusher moving in to NOCCA was based on a mistaken assumption that the school district lines would follow. If Upper Hurstville became part of the coveted Lusher district, not only could residents send their children there, but property values would likely increase – rather than decrease because of the impacts of the school, they said.

“If my neighborhood doesn’t carry the benefit, why would I support it?” asked audience member Sebastian Boegershausen.

Duncan said that the school district boundaries are written into Lusher’s charter, and for that reason, she doubted it could be changed. In the meantime, Upper Hurstville needs to develop an official stance on the school. “We have to come up with an opinion pretty soon, and I don’t think the district is going to change in 90 days,” Duncan said.

State Rep. Neil Abramson, however, said he would research whether Lusher’s district boundaries can be changed, and whether the legislature has a role to play.

“I’ll find out,” Abramson said. “It sure makes sense that if school moves into an area, then the neighborhood should be in its district.”

Lusher’s interest remains tentative — partially based on what the school can find funding for, among other factors — and its board may yet decide to walk away from the old NOCCA site, Duncan said. For that reason, the neighborhood has also assembled an informal “non-Lusher” committee to study likely impacts of other uses for the land.

Condominiums are frequently mentioned, but they would require an extensive zoning and approval process through the city – not to mention the dramatic renovations the asbestos-ravaged building requires – so their likelihood remains low. The “highest and best use” of the site, committee members said, would be for the NOCCA building to be demolished and a dozen or fewer single-family homes to be built on the block in its place.

The second auction of the NOCCA site had apparently drawn quite a bit of interest from developers prior to being postponed, so there may be other ideas out there for it, Duncan said. But Lusher has first refusal, and she said she expects their decision could come in October.

“At some point, Lusher will say ‘yea’ or ‘nay,’ and then we’ll know,” Duncan said. “If it has to be a school, we want it to be a school we can negotiate with. We have reason to believe that Lusher is that kind of school.”