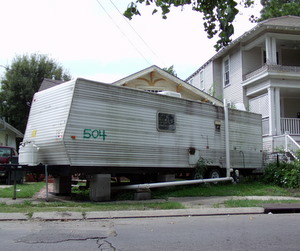 FEMA plans to remove this trailer from the front yard of Hannah Batiste's Robert Street home within a week or two, but the city council is applying pressure to see all of the more than 250 trailers remaining in the city removed.

The city should do its utmost to ensure that the 256 FEMA trailers remaining in New Orleans are gone by the end of the year, Councilwoman Stacy Head told city and federal officials at a Monday morning meeting.

The city council has already passed a law that trailers are not acceptable housing inside the city limits, Head said, so “the FEMA trailers are in the city illegally.”

“The trailers’ existence in the city of New Orleans is illegal. Your property is illegally on city soil,” said Head, who represents the Uptown-based District B, at a meeting of the city’s housing committee. “Until we force you to do the right thing, you’re not going to do it?”

Charles Schexnaildre, a deputy section chief with the Federal Emergency Management Agency, responded that FEMA’s job is to help the occupants of the trailer rebuild, not enforce the city’s laws. If the city takes action that removes occupants from the trailers, then FEMA will remove the empty trailers.

A breakdown of the 256 units across New Orleans shows 37 remain in District A (which includes Carrollton and Audubon), 25 remain in District B, 25 in C, 102 in D and 67 in E. In Districts A and B, the trailers are scattered across individual lots, rather than concentrated in any one neighborhood, Schexnaildre said after the meeting. In some cases, they are not even at damaged houses, but are occupied by evacuees from other areas living on relatives’ property here while they rebuild elsewhere.

On Robert Street in the Freret neighborhood, 79-year-old Hannah Batiste has just moved out of the FEMA trailer in her front yard, back into her renovated home. After years of struggling with contractors and officials while living in cramped corners with her grandson and granddaughter, Batiste is happy that the trailer’s power out, its doors are locked, and FEMA plans to pick it up in seven to 14 days, she said.

“I’m very tired” of it, she said, standing on a front porch hidden from the street by the hulking trailer. “But thank God I had it, because I didn’t have nowhere else.”

At the meeting, District C Councilwoman Kristin Gisleson Palmer noted that many of the trailer occupants are among the city’s most vulnerable, and the FEMA stats show that about a third are registered as elderly or disabled.

“In order to move these trailers, we can’t leave people out on the streets,” Palmer said, urging the LRA to do more to help the trailer residents.

Schexnaildre said these figures represent a reduction of 170 units from the beginning of the year, when 426 remained. Deputy Mayor Cedric Grant echoed that sentiment, noting that the first list he received upon taking office showed 358 FEMA trailers.

“I want to enforce the law, but I hesitate to put people in the streets without a solution,” Grant said.

The needs of the people remaining in the trailers are coming into conflict with those of their neighbors, Head said. She said she regularly receives call from people who say they are having a hard time selling their home because of a nearby trailer, or from people concerned that a trailer in the neighborhood could become a “projectile” during a severe storm.

“At what point are we going to say we understand that there have been hardships, we recognize it, but we’ve got to enforce the law?” Head asked. “From one policy maker, I’d love to see, by the end of this year, we are back to enforcement of a no-trailer policy except in properly zoned areas in District B.”

District E Councilman Jon Johnson said he saw both sides of the issue, mentioning a trailer near his mother-in-law’s house in Gentilly.

“You have got to make sure that when these people move out of these trailers they have some kind of decent housing to go into. I think one is as crucial as the other,” Johnson said. Yet, “We need to remove all the trailers. People are frustrated, and people don’t like the idea of having these trailers right next to them more than five years after Katrina.”