A motorcyclist died after striking a car in Central City on Thursday, the New Orleans Police Department reported. END_OF_DOCUMENT_TOKEN_TO_BE_REPLACED 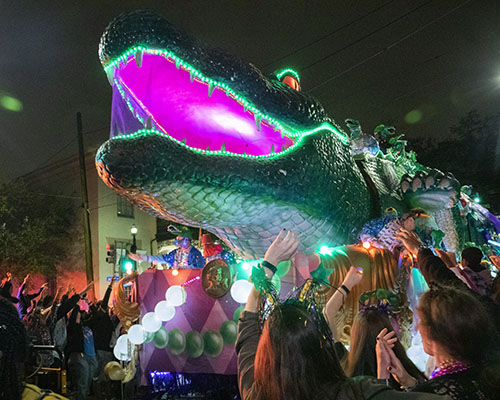 After the second fatality of the 2020 Carnival season involving a tandem float, the city Saturday night barred krewes from pulling more than one chassis with a single tractor for the remainder of the season.

The Krewe of Bacchus — known for its long, elaborate tandem floats — has agreed to break up its floats for tonight’s parade in light of the two tragedies. The Krewe of Thoth had planned to debut a three-section train float in its afternoon parade. It too will be split up. END_OF_DOCUMENT_TOKEN_TO_BE_REPLACED 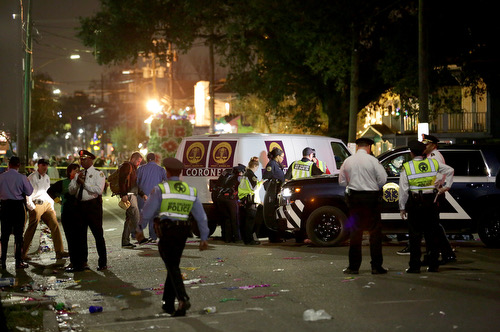 New Orleans police investigate the scene after the coroner’s van arrives at Valence and Magazine streets, where a woman was killed after being struck by a float during the Mystic Krewe of Nyx parade. (Dinah Rogers, Uptown Messenger)

A woman was struck and killed by a float as midway into the Nyx parade’s trek down Magazine Street on Wednesday night.

Float 21 struck Geraldine Carmouche, 58, at Magazine and Valance Street at about 9 p.m. She died at the scene. END_OF_DOCUMENT_TOKEN_TO_BE_REPLACED The vehicle involved in Sunday night’s fatal hit-and-run is believed to be a Chevy Tahoe or a GMC Yukon. (via NOPD)

The New Orleans Police Department is searching for a vehicle involved in a hit-and-run that killed a pedestrian Sunday night in the Treme area. END_OF_DOCUMENT_TOKEN_TO_BE_REPLACED