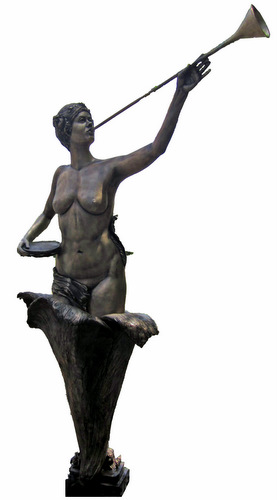 "Birth of a Muse," by Kim Bernadas

On Friday evening, the Lower Garden District wants you to come play in its parks.

At 5:30 p.m., the Arts Council of New Orleans will celebrate the installation of a new sculpture, Kim Bernadas’ “Birth of a Muse,” in the Terpsichore finger park near Prytania. After Hurricane Katrina, the Percent for Art program focused on restoration of public art, and “Birth of a Muse” is the first new work commissioned since then. The ceremony and reception will feature “live dancers and musicians, refreshments and hor d’oeuvres,” according to the Arts Council: END_OF_DOCUMENT_TOKEN_TO_BE_REPLACED

Two alleged armed robbers were arrested Saturday afternoon shortly after stealing a man’s SUV from him at gunpoint just off of Coliseum Square, police said. END_OF_DOCUMENT_TOKEN_TO_BE_REPLACED

An armed robbery in the early hours of Thanksgiving Day was reported on Freret Street near Jefferson Avenue and a man was grazed by a bullet in Carrollton over the weekend, police said Tuesday. END_OF_DOCUMENT_TOKEN_TO_BE_REPLACED

A would-be kidnapper tried to grab a woman off the sidewalk and force her into her car as she walked to work last week a block off of St. Charles, police said.

A man also had his wallet forcibly stolen on Magazine Street as he walked home from a bar early Saturday morning, but other than those incidents, police have seen a remarkable recent lull in crime in the NOPD Sixth District, which covers the Garden District, Irish Channel and Central City. END_OF_DOCUMENT_TOKEN_TO_BE_REPLACED

Police were called out to reports of a “male down” at the intersection of Terpsichore and South Liberty streets at 12:38 p.m., and found the victim lying on the sidewalk, and paramedics who arrived pronounced him dead. His name is being withheld pending notification of his family, police said.

No information about a suspect or motive has been released. Anyone with information should call the lead investigator, Homicide Detective Kevin Burns, at 658-5300. You can also call Crimestoppers at 822-1111, where information that leads to an arrest is eligible for a $2,500 award – even if you don’t leave your name.