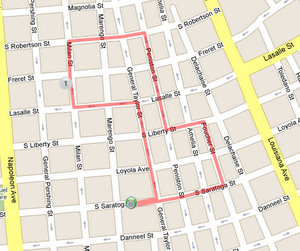 Rico Newman, wanted on a murder charge in a Jan. 2 shooting death

Collaboration between police and the residents of the River Garden apartments – site of the former St. Thomas public housing development – has led to the arrest of six people investigators say were responsible for a majority of recent gun violence there.

The 1800 block of St. Thomas Street, where a lone cluster of 1930s-era brick public-housing buildings remains amid blocks of pastel-colored redeveloped apartments, had seen an escalating wave of crime and gun violence over the last few weeks, noted officials in the NOPD Sixth District, which serves the Irish Channel, Garden District and Central City. Break-ins had given way to shoot-outs, leading to a fatal Jan. 2 shooting that investigators say may have been a tragic case of mistaken identity. END_OF_DOCUMENT_TOKEN_TO_BE_REPLACED