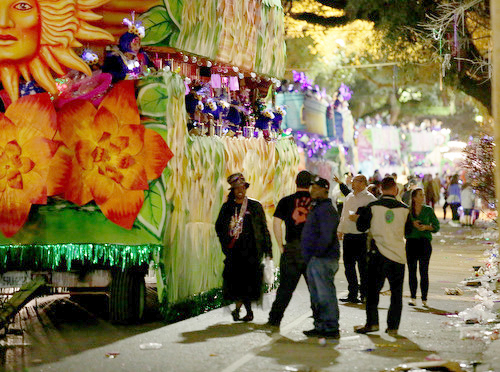 Floats are parked with riders still on them on Magazine Street where a woman was killed after being struck by a float during the Mystic Krewe of Nyx parade. (Dinah Rogers, Uptown Messenger)

“We lost two lives this Carnival season,” he said during a press conference on Monday. “It’s very disheartening.”

During the Nyx parade on Wednesday, Belinda ‘Puggy’ Carmouche, 58, was run over and killed by the second section of tandem float on Magazine Street. Then, on Saturday night, Joseph Sampson, 58, was fatally struck when he got between two units of a three-section Endymion float at South Galvez and Canal Street.

After Sampson’s death, the mayor and public safety officials outlawed tandem floats for the rest of the season, sending krewes scrambling to break up floats and find additional tractors and drivers.

Ferguson defended the decision he and the Mayor’s Office made to halt the use of tandem floats. “I apologize for making the change mid-season, but I know it’s the right decision,” he said. “I thank the Carnival krewes for their cooperation. We’re still able to put on the best show in the world.”

For future Carnival seasons, he said, the additional safety measures will be determined with input from the krewes, public safety officials and “other stakeholders.” He said he wants to begin those discussions right after Mardi Gras 2020. The planning for Carnival 2021 begins on Ash Wednesday, he said.

“What does that look like going forward? I really do not know,” Ferguson said. “That is part a conversation we are planning to have hopefully later this week.”

More barricades and more NOPD control over the pace of parades, as well as tandem float restrictions, are possibilities, he said in response to questions, but it is too early to commit to specific measures.

Everyone, he said, needs to focus on safety during Carnival, not just public officials. “During Mardi Gras everyone within a block kind of becomes a family to one another,” he said. “We need to be more vigilant — watching one another, being mindful of one another, especially our kids.”