LeLuna’s messages are both local and universal. (Carlos Fundora photos)

Most art is not supposed to be stepped on. But for LeLuna, this artist’s canvas is unexpectedly underfoot: Sewage & Water Board of New Orleans meter covers.

The water meter covers are painted with short, often politically universal messages, such as “Make Art Not War,” “Erase Hate,” “Love Me Tender.” Others have a local focus, such as “Copper is Currency” with the tagline, “Strip copper, fight gentrification” or an image of the city’s unofficial mascot, the flying cockroach. 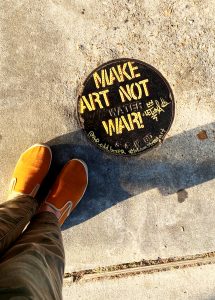 If you haven’t seen the reimagined water meter covers already — LeLuna said there are now more than 800 — you’re not looking down at the sidewalk. The covers grace Uptown sidewalks from the Riverbend to the Lower Garden District and can also be trampled on in Bywater and Marigny, with a few in the French Quarter and Mid-City.

“It’s my gift to the city,” said LeLuna, a New Orleans native and self-taught artist who found art at 13 years old, embracing graffiti.

The project started by chance nine years ago when he was helping a friend renovate a house and they found 15 water meter covers underneath it. LeLuna asked to take them, with their next location stacked next to his couch acting as an impromptu side table.

“One night I picked up one and painted it,” he said about how the project started a year later.

LeLuna uses his stash to switch out a water meter cover to be painted with one that has not, so there is no hole for someone to fall into. 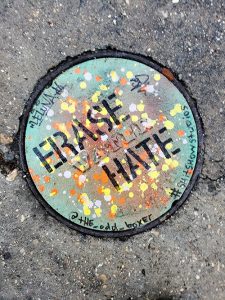 The artist makes each water meter cover unique, though will sometimes repeat a message, while making sure it is a different color or motif.

The modern-day water meter covers, already embossed with the word “WATER” on them, can often give have a double meaning: Does it mean “Erase Hate” or “Erase Water Hate,” most likely referring to water pollution and climate change.

“Everything I do is socially and politically driven,” said LeLuna.

There have been commissions but “I try not to do anything that is not me,” LeLuna said. Creating one for a politician, for example, is an automatic no.

Because LeLuna leaves his Instagram account @the_odd_boxer and hashtag #Leluna on the water meter covers, he has sometimes gotten complaints from people who want their old water meter covers back. And the artist is happy to oblige.

“While the Sewerage & Water Board greatly values the strong artistic culture in New Orleans, removing covers from our water lines and drains presents a safety hazard for our residents and visitors,” stated S&WB spokesman Richard Rainey in an email. “It is important to note that it is also against the law to move for alter these covers in any way.” 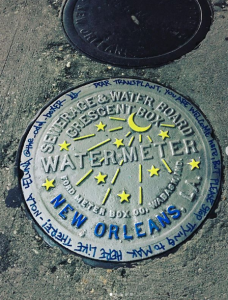 LeLuna shies away from painting over the classic, 1920s-era water meter covers of shooting stars and a crescent moon, so popular that they are often stolen and the image used on T-shirts, jewelry and other items. Photos on the LeLuna Instagram account show his work on the art deco covers emphasizes the design rather than obscures it.

The artist is adamant about the water meter covers not being stolen. “I am very public about how that is not OK with me,” said LeLuna, citing the danger of a coverless hole.

“It’s my way of giving back and beautifying things,” said LeLuna. “They are supposed to be for everyone.”

After a few years of painting the water meter covers, LeLuna stopped, wanting to focus on studio art. 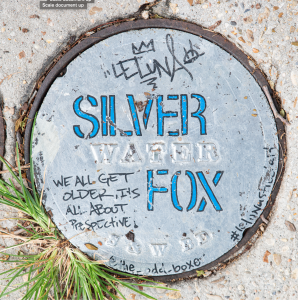 “When I turned 35, I realized that I had been working on and off as an artist and was tired of being broke,” LeLuna said. “If I didn’t do it now, live off my work, I was afraid I would be too old to continue the momentum.”

His shadow box assemblages are now on view at the Red Truck Gallery in the show, “Big Data is Always Watching” until Dec. 15. A few of the water meter covers are also part of the show.

LeLuna returned to painting water meter covers a little over two years ago, and is now making about 45 new pieces a week, so be on the lookout for more.

This report was edited after posting to add a statement from the Sewerage & Water Board.