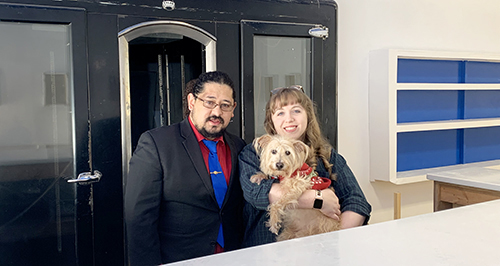 Milton and Allyson Hernandez, with Benji, stand in front of a vintage cooler that will be used to store wine. (Sue Strachan, Uptown Messenger)

For Allyson and Milton Hernandez, the dream of opening a wine shop just off Oak Street started fermenting back in June.

“We live in the neighborhood and didn’t see anything like it,” said Milton Hernandez, with Allyson Hernandez adding: “We thought ‘why not us.’”

Their business, Vino Wine and Spirits, is tentatively scheduled to open at 1124 S. Carrollton Ave. in March 2020 if a zoning change and permits are approved.

A City Planning Commission hearing, scheduled on Jan. 14, is for a specific zoning request for a conditional use to permit the retail sale of packaged alcoholic beverages, according to the business’s land-use application. The conditional use would then need City Council approval.

This commercial property is divided into two businesses: It is probably best known as the former site of Thibodeaux’s Floral Studios – the family still owns the building — and more recently Mo’s Art Supply and Framing. The wine shop hopes to occupy this space. The other business, A.L. Lowe Custom Framing, will remain. 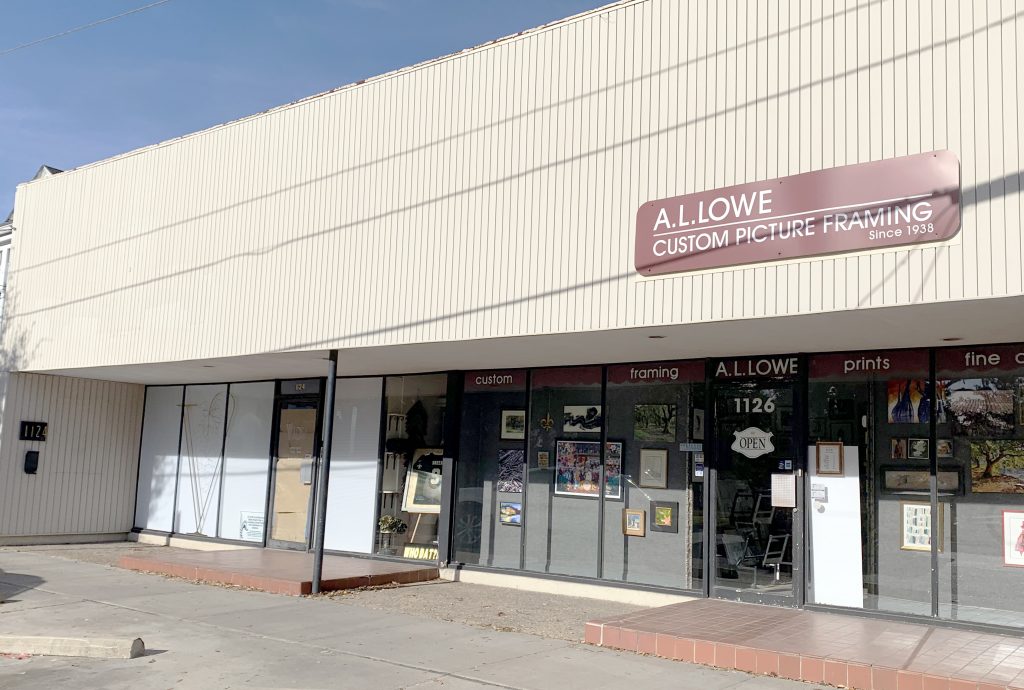 The Hernandezes have a background in food, wine and retail. Milton Hernandez started in the catering world in New York City in 2004; he has also worked in New Orleans for caterers and restaurants.

“I’ve held almost every position in a restaurant, so that’s how I got into and know food and wine,” said Milton Hernandez.

Allyson Hernandez, who graduated with a degree in graphic design – she created the store’s logo — has experience in retail.

The couple met while attending Loyola University. Allyson is a native New Orleanian; Milton was born in Colombia and grew up in New York City before moving to New Orleans to attend college.

As the concept of opening a boutique wine shop percolated, “we made a list of what we wanted to do, and realized this would be a good addition to the neighborhood,” said Milton Hernandez.

Vino is located near the entrance to Oak Street business corridor, a street with a mix of new and old bars, restaurants, retail and some real-estate development.

Made Grocery (formerly Simone’s Market), just over a block away on Oak Street, sells a limited amount of wine and spirits. Across the street in the old Rite Aid Pharmacy, Canseco’s Market is scheduled to open in early 2020 and will sell wine and liquor.

What Vino will offer, said Milton Hernandez, is a variety of wines, spirits and craft beers in a welcoming atmosphere and at affordable prices.  The bulk of what is for sale will be bottled wine, according to the application.

Hernandez noted that the store would sell wines that restaurants pour, but people can’t find in local wine stores.  Using their knowledge of wine, the focus is on small producers from acclaimed regions of the world sold at approachable prices. 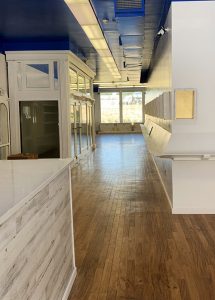 The Hernandezes have done renovations, including taking down the shelves in the back that covered the rear windows. (Sue Strachan, Uptown Messenger)

“We don’t want the price keeping people from buying good wine,“ added Milton Hernandez. “And we are not pretentious,” emphasizing that when helping a customer he will work with them to find a wine, spirit or craft beer in the price range they want.

The store will not be selling single cans or bottles of beer, nor will tobacco be sold. Customers can expect wine accessories for sale, as well as a selection of prepackaged cheese and other food to complement the wine.

Since they started renting the space, the couple has done cosmetic renovations, such as painting the walls and ceilings, finishing the floors, and tearing down 12-ftoot shelves on the back wall to reveal windows overlooking a backyard, which the couple cleared out.

The space already has two coolers, left over from when it was a floral shop, which has saved them money. For now, they are holding off on any substantial new work until the zoning and permitting process is completed.

As of press time, the Carrollton/Riverbend Neighborhood Association has not taken a position, as stated in an email. The Central Carrollton Association stated it would defer to CRNA. Other neighborhood associations have not answered a request via email for their position.

Two Neighborhood Participation Program meetings were held. They attracted only one attendee, Sylvi Beaumont, who came to an Oct. 18 meeting.

Beaumont and her husband, John Beaumont, own the neighboring building that houses the Rue de la Course coffee shop. A chiropractor, Beaumont also has her office in the former Canal Bank & Trust building on the corner of Oak Street and South Carrollton Avenue, which the couple has owned since 2001.

Beaumont said by telephone that she is in favor of the store. “I think they are doing a service to the neighborhood,” she said. “He will have more specialty wines and unusual brands.”