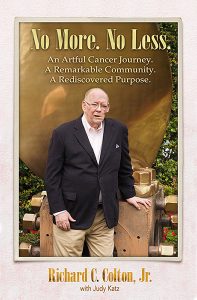 Among the Terrance Osbourne and Gustave Blanche III paintings that hang on the walls of Richard Colton Jr.’s home, there are a few empty hooks. The art that typically occupies the conspicuously blank spaces reveals some of the most intimate details of Colton’s life, and, this weekend, will be on public display.

The paintings will hang in the Sacred Heart Academy auditorium that bears Colton’s name as he celebrates the release of his memoir, “No More. No Less.” The book tells the story of Colton’s nearly 20-year battle with squamous cell carcinoma and the unique path to he took to recovery.

Like many, he did the chemotherapy and radiation, and, like many, he had surgery, four of them in fact, including one that removed part of his jaw and face. However, while some people choose to only have family or close friends present for the most trying moments of their fight, Colton chose to have an artist.

“When I got involved in art, I think my life started expanding,” Colton said. “I guess taking it to cancer really showed how art pushed me along.”

Though his day job was as an executive at the shipping company Lykes Brothers, Colton has collected art for decades. He never married or had children, but art created a sense of community in his life, a community that was integral to his recovery.

The artist who accompanied Colton is Taryn Moller Nicoll. She founded the “in vivo” movement that brings an artistic interpretation to the medical technicalities of severe injury and illness.

As Louisiana State University Medical Center’s first artist in residency, Nicoll has created artistic impressions of brain tissue from an Alzheimer’s patient as seen under a microscope. With Colton, she depicted the operating room.

“I said ‘Taryn, would you mind, if the doctors will allow that, will you go in and do an artist painting of what they’re doing?’ Because you never get the total picture of what was being done to you,” Colton said.

She painted three of Colton’s surgeries, including the removal of parts of his jaw and face. That surgery lasted 13 hours. Nicoll stayed the entire time.

Nicoll’s paintings are not realistic depictions. You won’t find any gore in her work. Rather, she creates emotional impressions, intense colors overlaid with precise anatomical details. The result is a painting that can provoke strong reactions.

Colton said friends have told him they don’t like her renderings of his surgery because the paintings forced them to think deeply about their own morality.

With the release of the “No More. No Less,” you will have the chance to contemplate the paintings for yourself. There will be two events. The first will be tonight, from 6 to 7:30 p.m. at the Garden District Book Shop, 2727 Prytania St., and the second will be Saturday from 3 to 5 p.m. at the Richard C. Colton Jr. Center for Performing and Fine Arts at Academy of the Sacred Heart. Both will have a book singing and light refreshments.