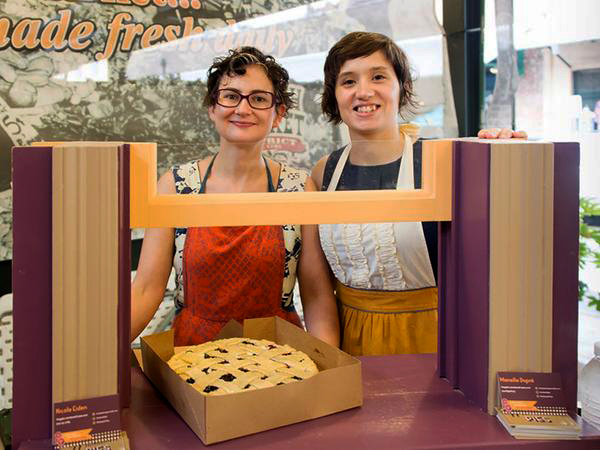 A new addition will soon join the mix of restaurants along Freret Street. This one will offer all-natural handmade pies, both sweet and savory.

Windowsill Pies, an 8-year-old catering and wholesale bakery, is planning a cafe with artisan pies and tarts. The goal is to be open by Thanksgiving, said Nicole Eiden, who co-owns Windowsill with Marielle Dupré.

“It will be a European-style cafe — multi-generational,” Eiden said. “We want a nice place for families to come.”

Patrons will be able to dine on pot pie — such as the winter root vegetable pie with Pernod or the herb-scented chicken — with a salad on the side. Seasonal roasted vegetables and a cheese plate are also planned.

A local beer and three wines will be served, along with coffeehouse fare, Eiden said.

Sweet pies — Vanilla Bean Bourbon Pecan and Dark Chocolate Tart with Earl Grey Caramel are two of the standards, sold alongside seasonal specialties — will be available in portions from itty-bitty to the whole pie.

During an early stint as a farmers market vendor, the bakers developed a repertoire of hand pies, which will be offered to-go for commuters in a hurry.

The cafe will be open for breakfast, lunch and dinner, according to business plans filed with the city, which recently issued a zoning verification for a standard restaurant at the location, 4714 Freret St.

Eiden and Dupré are taking over the spot vacated by Cuzco Peruvian Cuisine, which quietly closed its doors last month, although a sign declaring “Now open!” still hangs above the windows.

Before Cuzco opened to glowing reviews in 2016, the 1,000-square-foot space was transformed from a women’s fashion boutique into a restaurant. Luckily for the new tenant, much of the kitchen infrastructure is already in place.

They will be moving their entire baking operation into the Freret Street spot, Eiden said.

The two started in 2011, working out of Eiden’s home kitchen. After developing a loyal customer base, they rented a commercial kitchen on Octavia Street near Tchoupitoulas for their catering and wholesale business. Their pies can regularly be found at local Whole Foods markets, French Truck coffeehouses and a few select restaurants.

Windowsill has received some accolades along way. It won the Sugar Showdown on the Cooking Channel, and its Lazy Summer Strawberry and Cream Pie was named the Official Pie of “Waitress” New Orleans.

The Windowsill Pies cafe will be open six days a week. The front-of-the-house will operate like La Boulangerie on Magazine, with two baristas and two servers. Everything on the menu will be prepared at the site, following the Windowsill email tag line: “Southern styled, French inspired, New Orleans baked.”