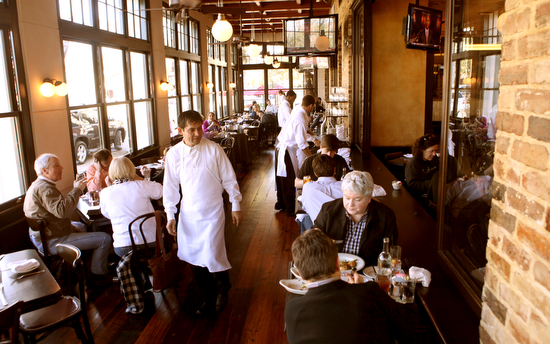 Superior Seafood, known for its oyster happy hour and its prime parade-viewing spot, was cited by the Department of Labor for sloppy bookkeeping and failure to properly pay overtime. (Sabree Hill, UptownMessenger.com)

Two popular Uptown restaurants have come under fire by the U.S. Department of Labor in the past week, resulting in financial penalties.

After a 13-year-old worker suffered third-degree burns from hot oil in the Jacques-Imo’s Café kitchen, the  Oak Street eatery was found to have violated a litany of child labor laws, according to a press release from the Department of Labor. It was fined $55,288 in civil penalties.

Then the DOL announced that Superior Grill and Oyster Bar on St. Charles Avenue was ordered to pay back wages and damages to 222 employees, totaling $238,300. An investigation found it had been violating overtime requirements.

The accident at Jacques-Imo’s revealed two violations of child labor laws: employing a child younger than 14 and allowing minors to clean fryers with an oil temperature exceeding 100 degrees.

The investigation also found that two minors, the 13-year-old and a 15-year-old employee, worked beyond the hours permitted for employees younger than 16 years old. “These minors worked past the evening hour limit of 7 p.m. during the school year, or 9 p.m. from June 1 through Labor Day, when they worked as late as 1 a.m,” the DOL states. “The minors also worked more than 40 hours per week, more than eight hours on a non-school day, more than three hours on a day when school is in session, all in violation of the law.”

At Superior Seafood, investigators at the DOL’s Wage and Hour Division found several record-keeping practices that shorted the overtime pay for 222 employees working more than 40 hours a week.

“Other employers in this industry should use the outcome of this case as an opportunity to review their own payroll practices and make sure they comply with the law,” said Troy Mouton, director of the New Orleans district for the DOL’s Wage and Hour Division.