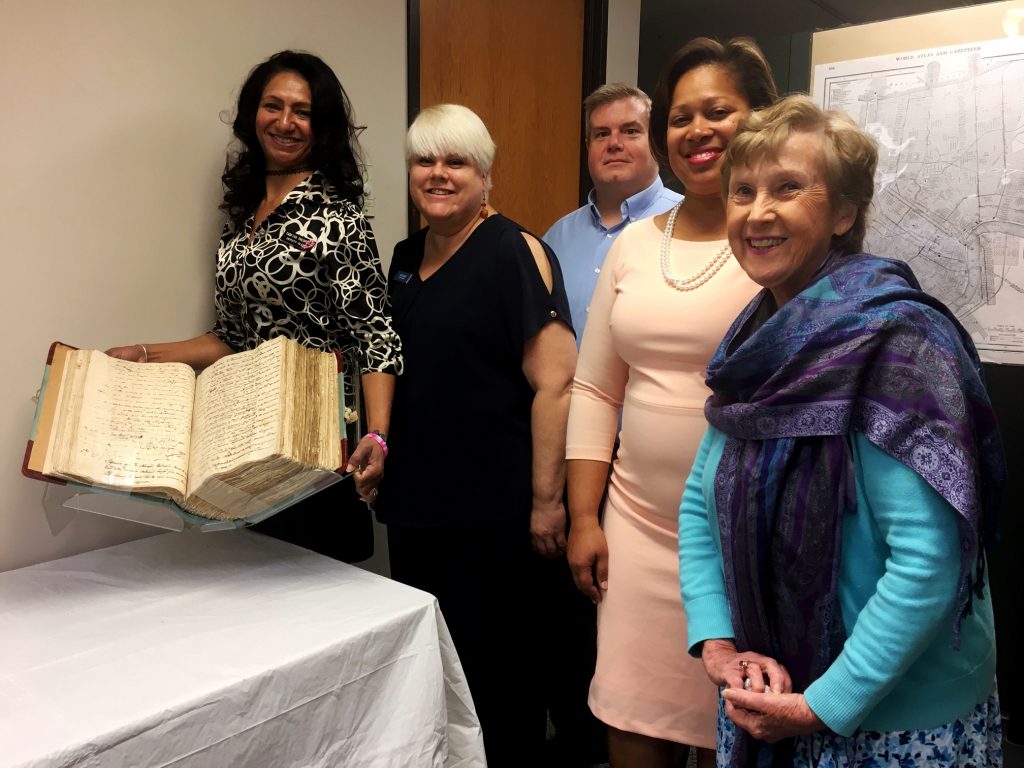 The history of New Orleans – as told through its notarial acts and other civil records – is currently on display during National Archives Month at the New Orleans Archives Research Center, 1340 Poydras St., Suite 360. 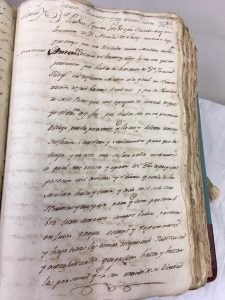 Visitors can find out about Amarante, a mulatress, who was 20 years old when on Sept. 9, 1785, she purchased her freedom from Delassize Piquery for 20 pesos, $50.50 in today’s money. Painstakingly translated from old Spanish, the notarial acts authorizing Amarante’s emancipation and those of many other slaves are contained in thick leather-bound volumes prepared by such early notaries as Fernando Rodriguez and Carlos Ximenez.

New Home Missionary Baptist Church, located at 1605 Robert C. Blake Sr. Drive since 1984, is housed within the former Beth Israel Synagogue. The roadway was originally named Apollo Street and then became Carondelet Street until it was renamed in Bishop Blake’s honor after his passing. During the late 1880s, New Orleans Mayor Joseph Shakespeare also lived at that address in a lovely Greek Revival mansion.

The city’s powder magazine, for which Powder Street was named, was in Algiers, New Orleans’ second oldest neighborhood.  The current Algiers Courthouse was built on the site of the former Duverje plantation which, along with almost 200 other homes and businesses, burned to the ground in the historic fire of Oct. 20, 1895.

Under the direction of Clerk of Civil District Court Chelsey Richard Napoleon, Louisiana’s premier archivist Sally Reeves and research center staff have put together three outstanding exhibits along with a series of seminars and tours showcasing the vast array of research materials available to help trace everything from a single real estate transaction or someone’s heritage.

The main exhibits focus on historic Algiers Point and New Home Missionary Baptist Church in what was originally known as Faubourg Annunciation. For those interested in genealogical research, a much smaller display features pre-Civil War emancipation documents. The overall collection also includes the signature of famed Voodoo Queen Marie Laveau.

With an orientation toward the Mississippi River, Creole architect and surveyor Barthelemy Lafon drew the original plans for Algiers Point and utilized minuit measurements to lay out the neighborhood. The exhibit also depicts documents that describe Algiers maritime and industrial nature with its original rail line and many shipbuilding and ship repair businesses which were forced out of the French Quarter after land values rose. 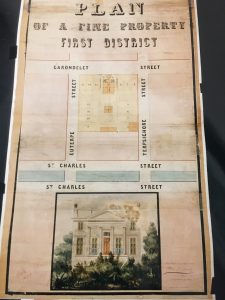 Built by Peter Conery in 1830, the Shakespeare mansion at 1605 Carondelet also served as the Sylvester Larned Institute, a Presbyterian School for girls. In 1905, the widow Antoinette Shakespeare sold the property to the Beth Israel congregation who demolished it and erected a building better suited to their needs. The current structure was recognized by the Historic District Landmarks Commission in 1987.

Originally appointed by the king or his representative, it was not unusual for Louisiana’s notaries to have presented a gift to the reigning monarch or directly purchased their positions, said research center staffer Siva Blake. Often their commission was for life. One enterprising notary, Pedro Pedesclaux, made a large enough donation to also include lifetime appointments for his male children. After the Louisiana Purchase in 1803, Pedesclaux’s commission was eventually cancelled.

Because Louisiana civil law is based on Napoleonic Code, notaries held an important role in Louisiana society. They were entrusted to prepare property transactions, building contracts, loans, adoptions, probates and much more. Notaries were required by law to maintain an archive of their records and provide for their maintenance after their own death. The law also dictated that records be stored in a brick building with a clay roof to protect against fire and that they be regularly available for public inspection. Families often used the same notary through successive generations.

In 1867, the Louisiana Legislature determined that New Orleans needed a better system to manage and maintain the parish’s records and established the state-run Office of the Custodian of Notarial Records for Orleans Parish, the only public repository of its kind in North America.

In 2009 the archives merged with the office of the Clerk of Civil District Court to become the New Orleans Notarial Archives. A state-of-the art Research Center was established in September 1998 and is visited by more than 1,000 people annually. The Dreyfous Reading Room — named after two generations of prominent notaries Abel, Felix Jonathan and George Dreyfous – was originally dedicated in 1989 and moved to the Research Center in 2004.

Dating back to the 1730s, when the French ruled New Orleans, this world-famous, ever-growing collection includes approximately 50,000 volumes of notarial acts containing almost 50 million pages, according to Reeves. Another main focus of the collection is 5,000 watercolor plans and elevations of houses, lots and tracts of land in Orleans and surrounding parishes.

“Many of these architectural drawings known as Plan Book Plans depict landscaping including French parterre-style gardens, industrial and transportation features such as streetcar tracks or railways as well as kitchens, slave quarters, stables, poultry houses, cisterns, wells and sheds,” she said.

Created by more than 100 practitioners who had studied architecture or engineering, the Plan Book Plans were drafted for legal purposes rather than as art. They often were used to publically advertise court-ordered auction sales to ensure that all stakeholders including women and children were protected. At first the drawings were small and simple and posted on church doors. As they grew in size and scale, they were posted on coffee houses.  After the auctions, the drawings became the property of the notaries who passed the acts of sale. Eventually they ended up in the state’s repository.

“Our office is excited to share these thousands of historic documents with the citizens of New Orleans and the world,” said Clerk of Court Chelsey Richard Napoleon.  “Many documents in our Research Center go hand in hand with others in our Land Records and Civil Divisions. Together they tell the amazing story of New Orleans and its people. I urge everyone to find the records that tell your story at the Notarial Archives Research Center,” she concluded.

Reeves will conduct a free half-day Title Chain Seminar on Thursday, Oct. 24, from 9 a.m. until 1 p.m. Attendees will learn how to trace a land title in Orleans Parish. Seating is limited. Please register in advance for Reeves’ seminar at 504-407-0106 or civilclerkresearchctr@orleanscdc.com. 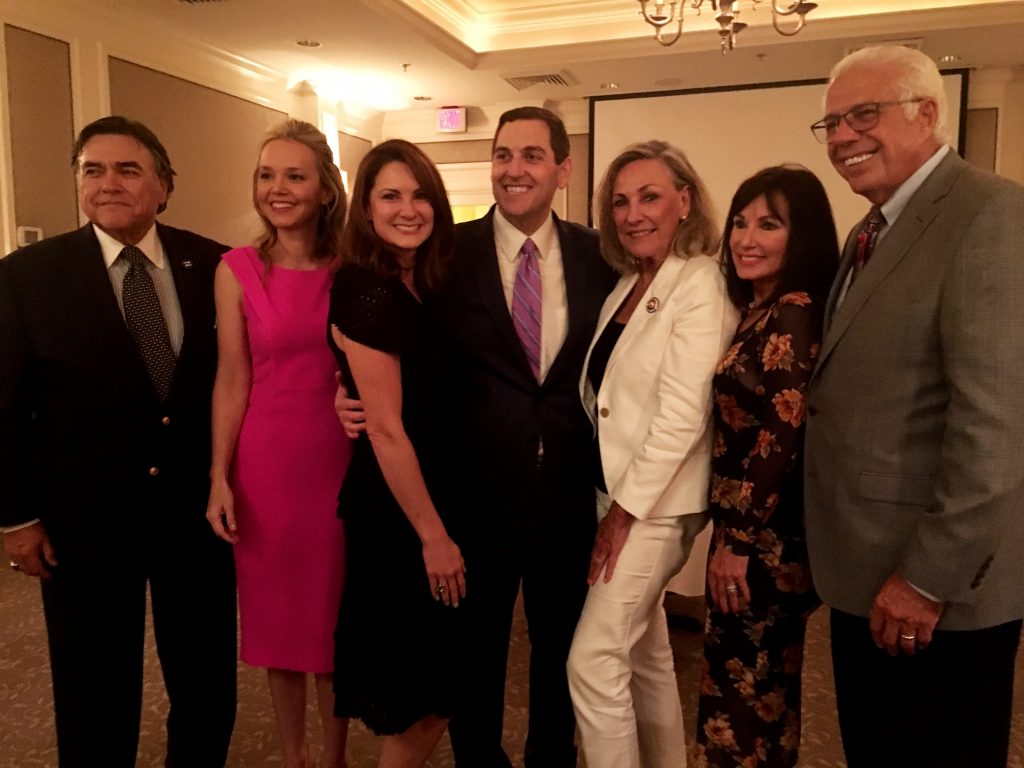 Like many other term-limited legislators Walt Leger was looking for the next organization through which  he could make a significant impact when New Orleans & Co. (formerly the Convention and Visitors Bureau) came knocking on his door. As their new Senior Vice President for Strategic Affairs and General Counsel, Leger is bringing his excellent negotiating skills, understated demeanor and extensive network of personal contacts throughout the state and the Gulf South.

Leger was honored recently by a diverse group of elected officials, business and nonprofit organization executives for his outstanding work on behalf of the community. Though he was unable to attend in person, Gov. John Bel  Edwards sent a video thanking Leger for his years of service in state government. Others who spoke included Michael Williamson from the United Way of Southeast Louisiana, Eva Kemp from Democrats for Educational Reform, business leader Bill Hammack, and City Council President Helena Moreno, who presented on overview of Leger’s many accomplishments.

With the New Orleans & Co.’s mandate to achieve more with fewer tax dollars and the ongoing need to create stronger pathways to management for minority employees, Leger’s skills and experience will quickly make him a valuable asset for the entire industry.