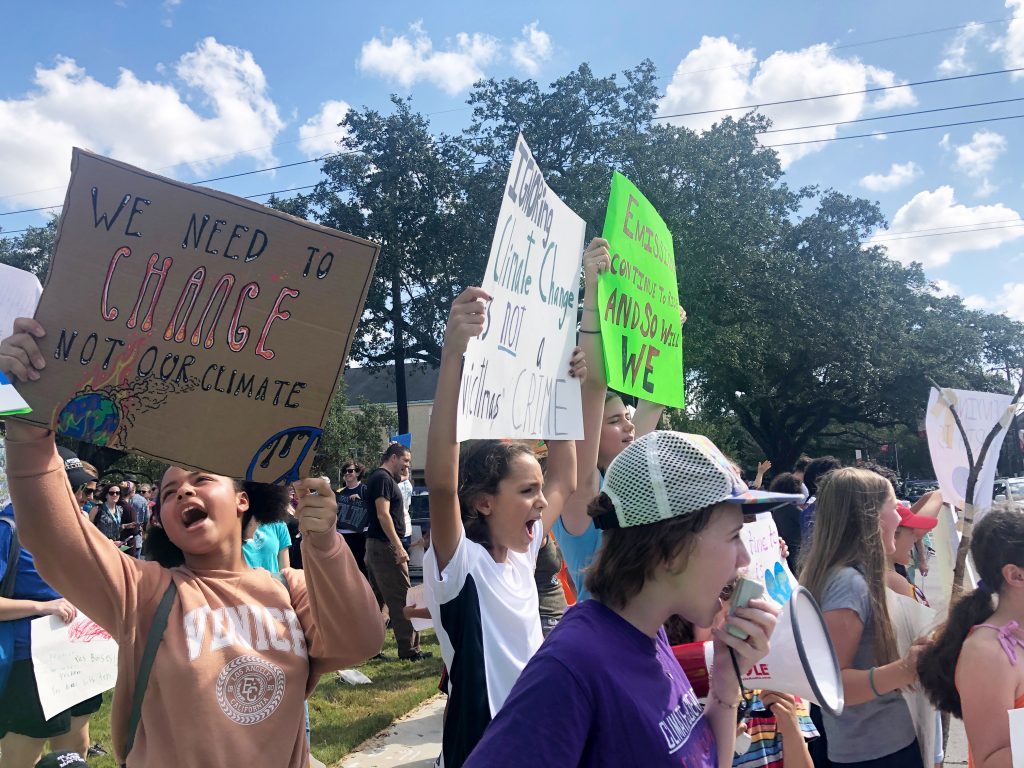 Young protesters make their voices heard Friday on St. Charles Avenue. Most of the children who were protesting at the student climate strike are homeschooled or attend the Waldorf School. (Sharon Lurye, Uptown Messenger)

Dozens of young people, from toddlers to teenagers, staged a protest against climate change on Friday morning at the corner of Napoleon and St. Charles avenues.

They were part of a worldwide youth movement known as the “Global Climate Strike,” where students walk out of school in order to push politicians to take action to combat climate change and reduce the country’s reliance on fossil fuels. 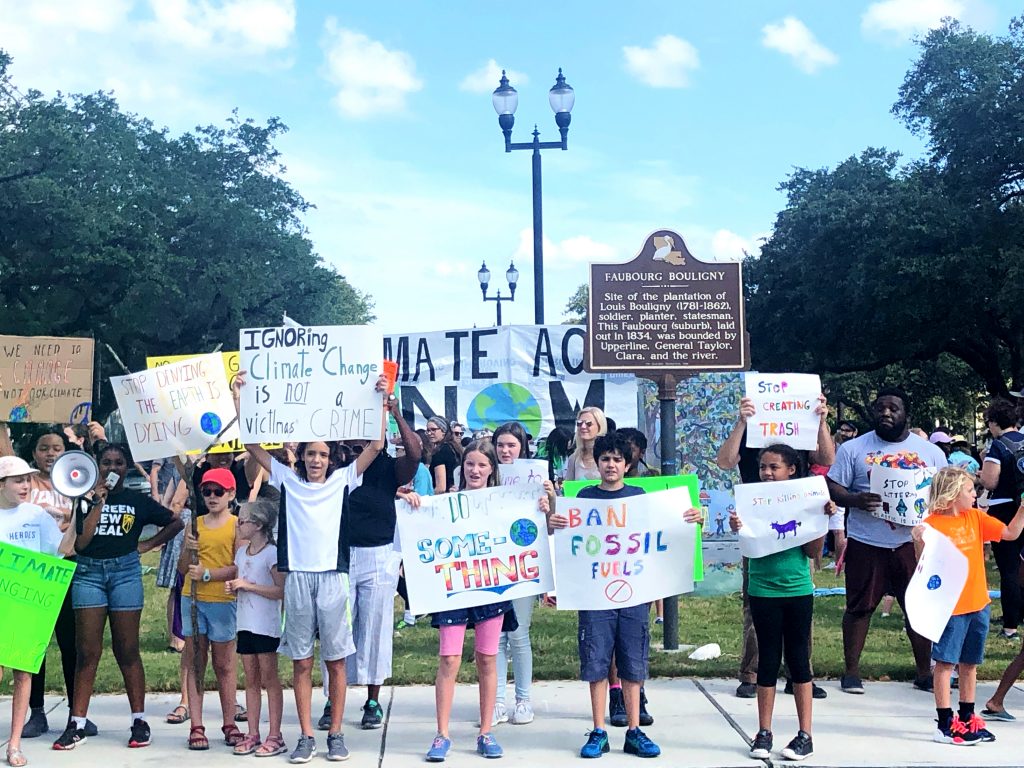 Dozens of schoolchildren protested together to raise awareness of the environment on Friday. (Sharon Lurye, Uptown Messenger)

Most of the students at the protest were either home-schooled or attend the Waldorf School. They held signs stating things like “Emissions continue to rise and so will we” and “Climate change is a fact not an opinion,” and chanted, “No more gas, no more oil, keep the carbon in the soil!”

Some drivers on the busy intersection honked their horns and gave the kids thumbs up as they passed.

Part of the goal of the protest was not just to make people more conscious about climate change, but also to show that children can make a difference. The movement was started by Swedish teenager Greta Thunberg last year, and since then has spread to kids in more than 100 countries, according to CNN.

“We hope to catch people’s attention and make them realize that kids have power as well, even if we can’t vote,” said Amelie Labbe, 13.

“I’m hoping to show people that kids and adults can rise together, especially kids. Kids are very underestimated,” said 12-year-old Ida Schenck, a seventh-grader at the Waldorf School.

Ida, one of the main organizers of the protest, started the Green Taggers environmental club at her school and has been involved in climate activism since she was eight years old. 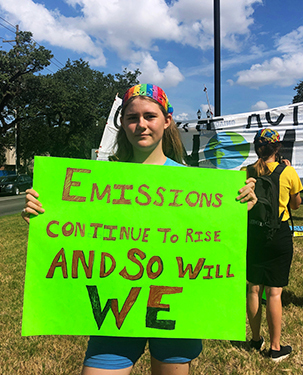 “I’m here because this is my future,” Ida said. “And I love the Earth and I love this area, and I want it to survive.”

One of Ida’s schoolmates, 12-year-old Chad Harris, said that she hopes that this day of action will inspire more in the future.

“I’m hoping that more grown-ups will join in and spread it to their work or their friends, family,” she said. “And we can get more kids doing it, they can grow up doing it. And we can just grow up continuously chanting for rights and for change.”

As it turns out, the Waldorf School had a teacher development day on Friday, so Ida and her friends didn’t have to walk out of class as she planned. She said she was glad, as it meant she could spend more time at the protest.

Ida said that she hopes that this protest can remind people to make smarter environmental choices in their lives, such as turning off the air conditioning when they’re not at home. And, she wants to make sure that no one underestimates kids like her.

“I’m fighting for my future, for everyone’s future, and for my life,” she said.

This story originally appeared with the wrong photo of 12-year-old Chad Harris, due to an editing error. Chad also was misidentified as a boy. The errors have been corrected. 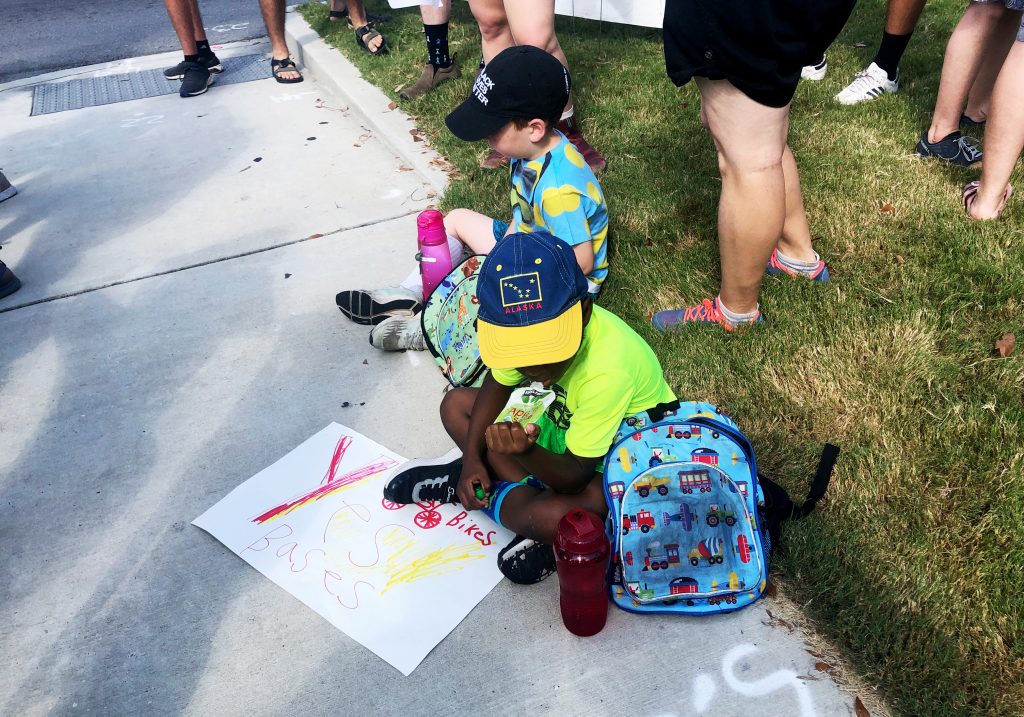 A young boy with a homemade sign attends an environmental protest in Uptown on Sept. 20. (Sharon Lurye, Uptown Messenger) 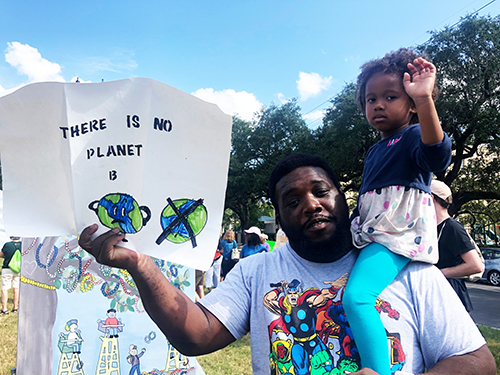 A father and daughter take part in the climate change protest together on Friday. (Sharon Lurye, Uptown Messenger) 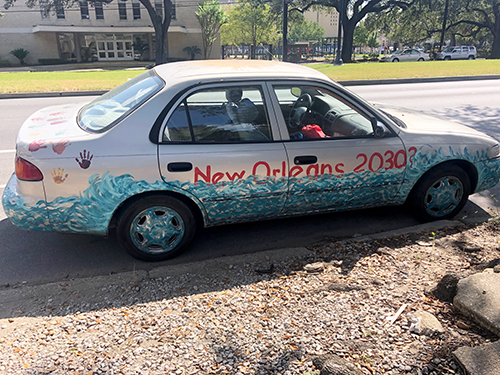 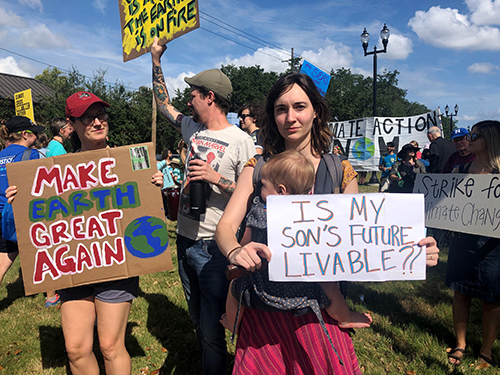 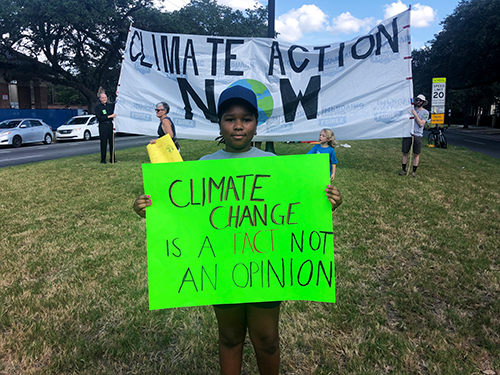 Chad Harris, a sixth-grader at the Waldorf School in New Orleans, at the climate change protest on Friday. “I’m just working really hard to turn this around because soon there will be no turning back,” she said. (Sharon Lurye, Uptown Messenger)