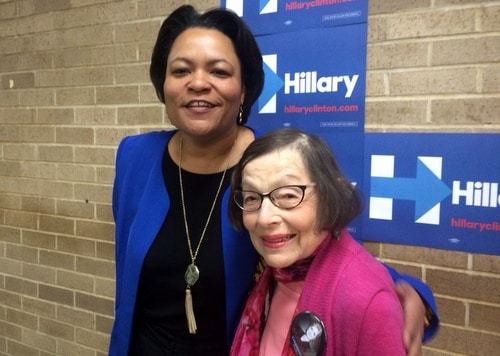 LaToya Cantrell and Felicia Kahn at the opening of the Hillary Clinton headquarters in the 2016 campaign. Mayor Cantrell will speak at the awards dinner honoring Kahn. (Danae Columbus, UptownMessenger.com)

The New Orleans Coalition is holding the Felicia Kahn Citizenship Award Dinner on Thursday, Sept. 26, to honor the legacy of political activist Felicia Schornstein Kahn, who died June 21, 2018, at the age of 91.

Kahn fought long and hard for equal rights, civil rights and the Democratic Party. At age 90, she was the second-oldest delegate to the Democratic National Convention, her 10th convention. 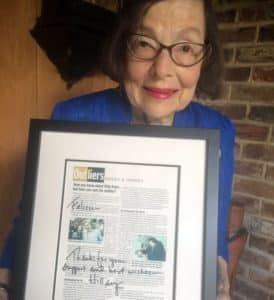 She was among the inaugurating members of the New Orleans Coalition, one of the city’s first integrated political organizations. “Throughout her life, Felicia worked tirelessly to secure, defend and uphold the rights of women and minorities,” the New Orleans Coalition states in a press release. “She inspired young and old to participate in elections, and to improve public policy for our fair city.”

The New Orleans Coalition is sponsoring the annual award in Kahn’s memory. “It is our hope to inspire and recognize others who offer their passion, hard work, and dedication in making our democracy and our city better for all citizens, particularly those who are denied basic rights,” the release says.

Kahn was a vital part of other organizations involved in developing a slate of nominees for the awards. These include the Independent Women’s Organization, the League of Women Voters of New Orleans,  Planned Parenthood and the National Council of Jewish Women.

Mayor LaToya Cantrell will give the opening remarks at the event, which will also feature a Silent Auction of Felicia Kahn memorabilia.