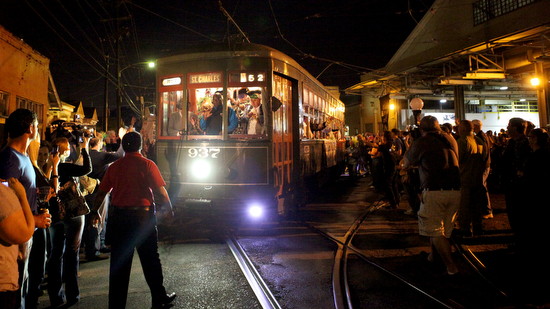 Crowds gather at he Willow Street Car Barn as the The Phunny Phorty Phellows take off in a street car on Twelfth Night in 2012. ( UptownMessenger.com file photo by Sabree Hill)

Entergy and the New Orleans Regional Transit Authority are partnering to install solar panels on the streetcar barn on Willow Street, part of a larger effort to generate solar energy from the rooftops of publicly-owned buildings across New Orleans.

For details about the project, see the news release from Entergy below.

In another move to harness the power of the sun where empty commercial rooftops once stood, Entergy New Orleans and the New Orleans Regional Transit Authority have reached agreement to install solar panels on the roof of the agency’s Carrollton Streetcar Barn. The 300-kilowatt system will feed directly onto the Entergy New Orleans electric distribution grid for the benefit of all customers.

The agreement is part of Entergy New Orleans’ 5-megawatt commercial-scale rooftop solar project, which was approved by the New Orleans City Council last year. As part of that, the company announced in February that it had installed panels providing approximately 2.5 MW of solar-generating capacity on a series of warehouse rooftops near the Inner Harbor Navigation Canal.

“RTA is the first public entity to participate in our distributed solar generation project and we appreciate their initiative in stepping up to the plate as we work to put renewable energy into action,” said David Ellis, president and CEO of Entergy New Orleans. “We thank them for helping to lead the way among city agencies, and we look forward to partnering with others as we move forward.

“Through this effort, the company’s 1 MW solar power plant with battery storage in New Orleans East and our hard work toward securing the New Orleans City Council Utility Committee’s recent approval of 90 MW of solar generation, Entergy New Orleans is demonstrating its commitment to carbon reduction through renewable energy resources.”

The company continues its work to identify new sites for the installation of additional panels, focusing on buildings owned by educational institutions, government entities and nonprofit organizations in Orleans Parish.

“The RTA is proud to be entering into this partnership to help the City of New Orleans become greener,” said RTA Board Chairman Flozell Daniels Jr. “We are focused on conserving energy, reducing waste and doing our part to build a more sustainable community, while providing safe and reliable transportation services.”