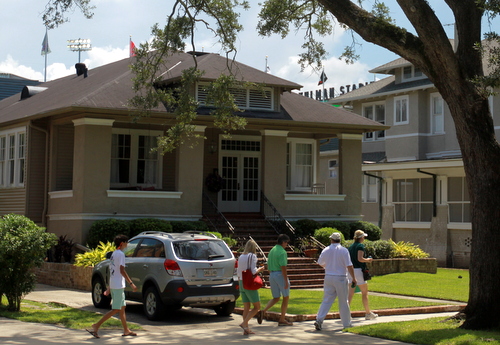 After I graduated Tulane in May 2018, I joined Avodah, a yearlong Jewish service corps. I was the only one in my cohort who had ties to New Orleans, though I had only lived here for four years. We all live near the Starbucks on Freret. I did not feel like much had changed because I was still in Uptown New Orleans. I brought them to familiar, nearby places, like Bruno’s, Bear Cat and Cure. I thought I knew the city pretty well.

My supervisor had lived here just as long as I did. She came here to do a year of service and stayed. She knew the same places I did and then some. From cafes in Mid-City to hang-out spots along the river, it seemed like she was living in a city I had only visited.

The majority of the students stay inside in the “Tulane bubble.” They eat, visit and live in a small part of the city. Geographically, it’s a box marked by Claiborne Avenue, Carrollton Avenue, St. Charles Avenue and State Street. There are outings to Audubon Park, Freret Street and Oak Street, occasionally Magazine Street, Bourbon Street or Tchoupitoulas for bars, restaurants and cafes. For the most part, students do not leave that area.

Evidence of gentrification lines these corridors. We were in walking distance of establishments and neighborhoods that felt familiar, reminiscent of the wealthy communities we left behind to go to Tulane. We were able to separate ourselves from the poorer areas of New Orleans that force us to confront our role in our temporal community.

Their tuition per year is increasing at approximately 2 to 3 percent. The university has several programs to increase affordability through need-based scholarships and grants and some specifically made to specifically help Louisiana residents. Regardless, 69 percent of the student body come from the top 20 percent income bracket and 82 percent are from outside of New Orleans.

The concentration of Tulane students in New Orleans created a unique localized housing market. While Tulane freshmen and sophomores are required to live on campus, juniors and seniors have the option to live off campus. According to Tim Lempfert, the housing and residence life director at Tulane, there are an estimated 3,600 out of 4,000 students looking for rental opportunities near campus.

We lived in high-priced houses and apartments in poor to good conditions close to campus. Our landlords could take advantage of our naivety, but we were rich enough that it would not threaten our financial security. We were scared of being evicted without having the physical safety net of family living nearby. Students are too transient and busy with school to take legal action and hold landlords accountable.

As Tulane admits more and more students each year, the rental market becomes even more saturated with students. They will start to look farther out from campus to find a place to live, expanding the concentration of wealthy, white renters settling for poorer conditions. We increase prices, lower the housing quality and ultimately push out New Orleanians in a city where rent-burden is already double the national average.

Since most of Tulane students are not from New Orleans, our parents travel to visit us. There is no room for them to stay in our houses. Why would they want to stay with a college student anyway? They have to find housing when they come to visit. Penny, a short-term rental host in the Carrollton area, said one-fifth of her renters are Tulane and Loyola parents looking for a place to stay during college drop-off and pick-up periods, Parents Weekends and graduation.

This did not surprise me at all. My mom came to visit me a few times during my college career. At the beginning, she stayed in hotels and bed-and-breakfasts either near Tulane’s campus or in the French Quarter (when she wanted to party). She changed course with the rise of short-term rentals in 2016. My mom is, what me and my sister joke, a “nester.” Whenever she travels somewhere, she moves in. Shen hangs up her clothes, brings her own snacks and sometimes her own decorations. She prefers to have control of her space, like most people and like most moms.

I was involved with housing justice work during my junior and senior years at Tulane, so I knew the downfalls of corporations like AirBnb. I understood that a small amount of active short-term rentals can increase the cost of living in their neighborhood. One study of 100 U.S. cities found that a mere 10 percent increase in Airbnbs led to a 0.4 percent increase. Short-term rentals, like AirBnb, have transformed neighborhoods, especially historic and iconic neighborhoods, like ones surrounding the French Quarter.

Emily Peck and Charles Maldonado of The Lens wrote in 2017: “In 15 neighborhoods, including Treme and Bywater, short-term rentals make up at least 3 percent of residential addresses. That’s a considerable slice of the city’s most desirable real estate.” They turn the area from a neighborly community to streets of tourists visiting for a few days at a time.

Penny (not her real name; she asked that a pseudonym be used because of hostility over short-term rentals) only rents out the basement of her home. She advocates against whole-house rentals. She believes short-term rentals should only take up a portion of a home. She thinks it’s the more ethically responsible option. She said it allows the renter to keep an eye on her guests and ensure that they abide by her neighbors’ community guidelines.

“I talked to my neighbors, and we established quiet time and parking areas,” she said. “Fortunately, I’m in an area that’s not that dense, so it really wasn’t an issue. But, out of respect for my neighbors, I needed to know that what I’m doing isn’t going to impact them in any way whatsoever.”

She said does not want her guests to change her neighborhood.

“You’re going to make sure that you’re screening the people, which I do.” She pauses because a truck playing loud music passes by. “I don’t allow people coming like that loud truck coming by right now — that would absolutely not be allowed. If anybody came to my house like that I would tell them to go to another place. I would lose $1,000 before I inflict that upon my neighbors. I think that if you’re living in the house you’re going to be more conscientious.”

‘Without New Orleanians, there is no New Orleans culture’

Negative impacts of whole home short-term rentals aren’t limited to interpersonal disturbances but create a larger and more systemic change in the city. It has allowed out-of-town investors and developers to buy housing stock to use as short-term rentals, thereby raising the rent and decreasing the supply of homes for people who want to live here and contribute to the community.

The Lens found in 2017 that Penny was in the minority as a host who only rents out a part of her home. About 70 percent of short-term rental permits in New Orleans then allowed for “whole-house rentals” for a maximum of 90 days per year. That’s almost every weekend night.

When my mom came to New Orleans for my graduation, she hung up her clothes, put her snacks in the fridge and set up a glass turtle in the kitchen. My sister, grandma, aunt, uncle and cousin came with her. They got comfortable in a two-story AirBnb with a pool outside. Everyone had privacy, they didn’t have to deal with their temporary host, and they were right in the middle of a beautiful neighborhood. It was almost like they were home.

During graduation season, my friends had similar experiences. I went to graduation parties at whole-house short-term rentals filled with my friends and their extended families from California to New York. They held beautiful parties with napkins with their graduates’ faces on them and delicious cakes. They attended the commencement ceremony, then packed up their things and left. The next weekend, new visitors will come, celebrate and leave.

Our short-lived celebrations, however, are coming at the expense of New Orleanians’ enjoyment, money and stability. A whole-home short-term rental allows tourists to find temporary comfort at the cost of decreasing housing stock and increasing rent for the people who live here. That means New Orleanians may have to leave neighborhoods where they have lived for generations. Forced separation from community, history and culture is traumatic.

The city of New Orleans, the short-term rental companies and operators, and tourists have the responsibility to make ethical decisions when it comes to housing if not solely for moral reasons then because without New Orleanians there is no New Orleans culture. When neighborhoods become essentially streets of hotels, there are fewer block parties, crawfish boils and parades. There are fewer opportunities to come together and celebrate — the very thing that brings people here to begin with.