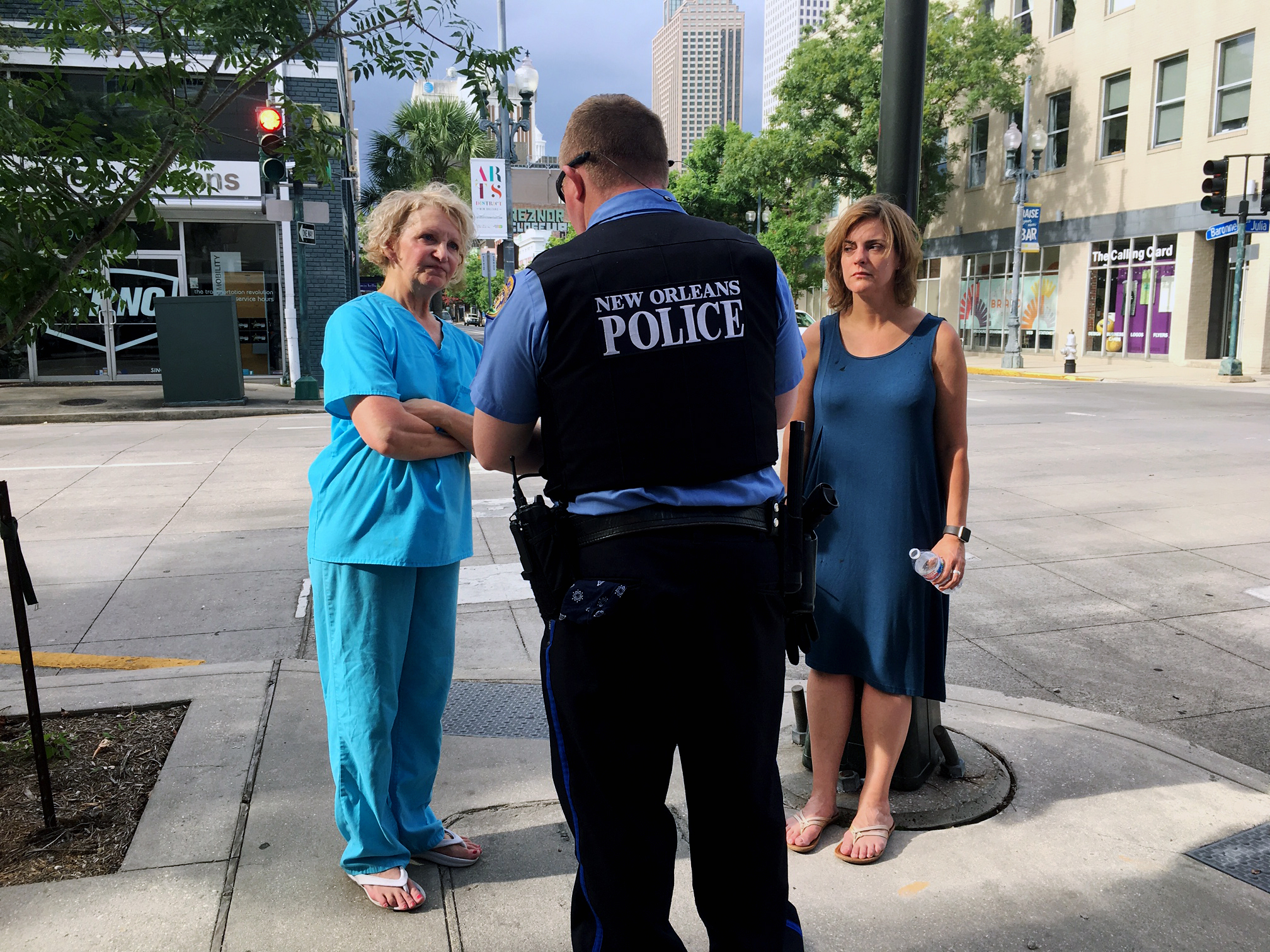 A victim and a victim advocate talk with a New Orleans police officer investigating a recent crime. (Danae Columbus)

The police labeled it a purse snatching, but to the victim it was a crime of opportunity and much, much more.

An out-of-town businesswoman was walking through the Warehouse District around 5 p.m. on a recent Sunday afternoon when a car carrying two women stopped on the corner. One grabs the woman from behind, throwing her to the ground. While the driver of the vehicle laughed, the perpetrator repeatedly kicked the businesswoman in the face and head. Blood oozing from her mouth, the terrified victim was crying and begging for mercy as the savage assault continued. 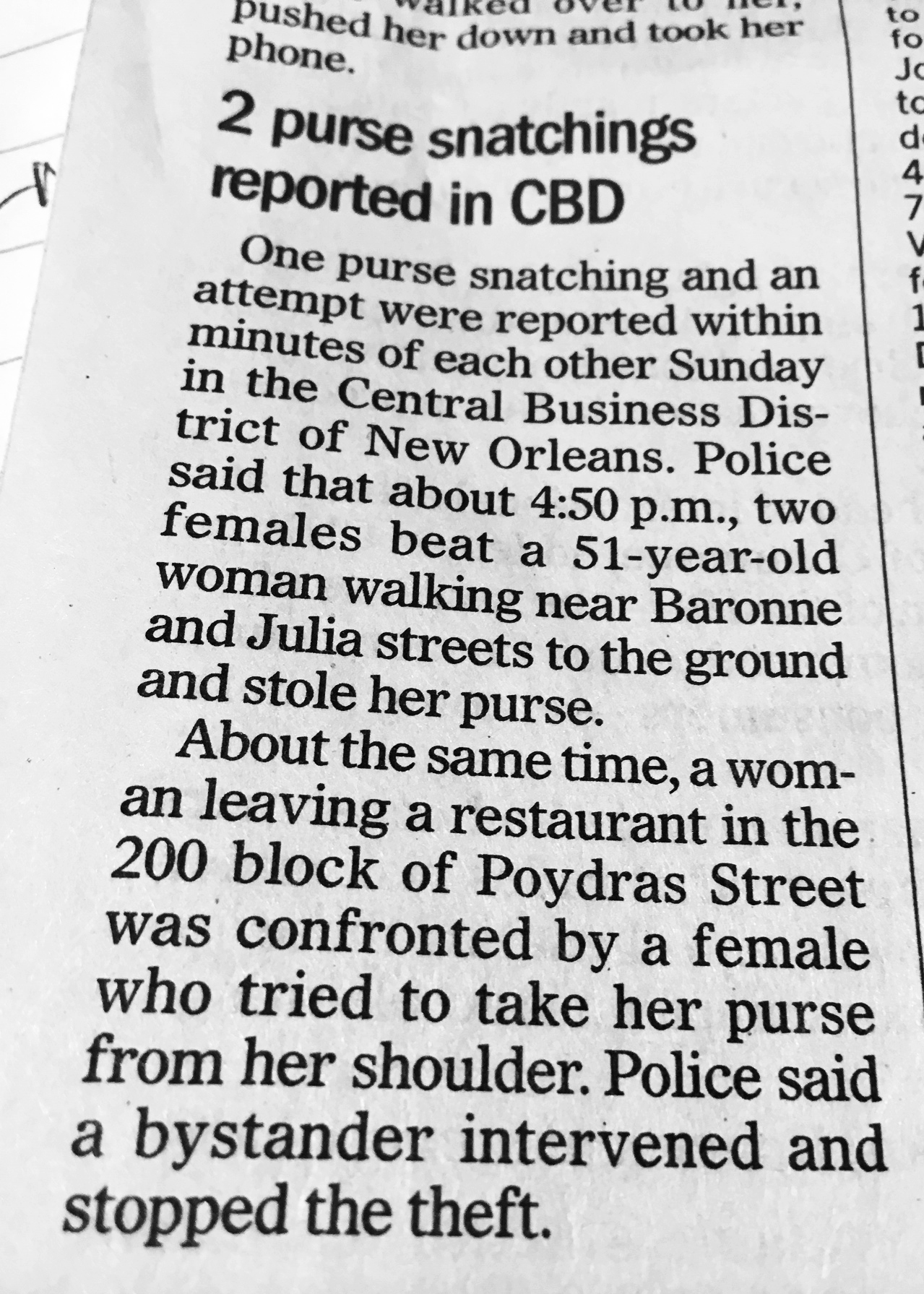 New Orleans Advocate story on the assault and purse snatching. Click to enlarge.

My friend — a slightly built middle-age female — and I happen upon the scene and begin screaming at the perpetrator. As I call 911, the two women quickly speed away. Within five minutes several NOPD units and an ambulance arrive. While the NOPD supervisor tells the victim that the attack was not her fault, the perpetrator is on a shopping spree with the victim’s credit cards and even tries to rob a second woman just a few blocks away.

If my friend hadn’t had the courage to confront the perpetrator, what would have happened to the victim? No other passers-by gave the assault a second glance.

In the succeeding days, it was the victim who gathered video from a security camera at the scene and from other cameras in stores where the perpetrator had shopped with her credit cards. The attacker could eventually be placed in custody on felony charges including aggravated assault, battery and theft.

Under the new pretrial screening program, the perpetrator might be rated as a low flight risk and released without having to post a cash bond. Until her court days, she would be free to assault other women she finds walking down the street alone.

In the new normal of our criminal justice system, it’s not just the real victims who are labeled victims. it’s also the perpetrators, who are often poor minorities. Many of their new advocates believe that our criminal justice system is difficult to navigate. Perhaps it was designed that way because individuals within the system have been accused of crimes, counter others. 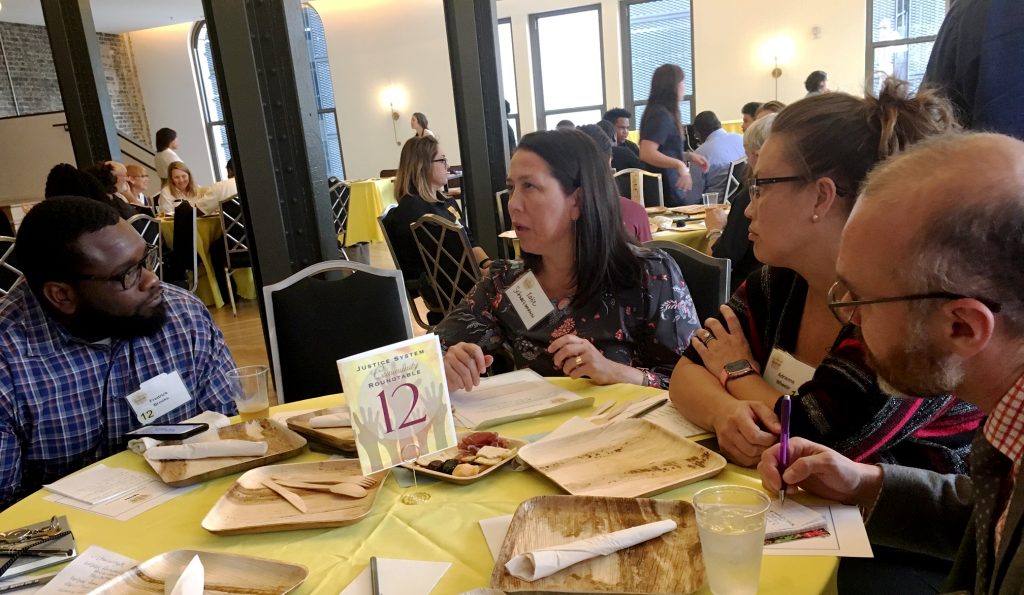 Frederick Brooks, Katie Schwartzmann, Adrienne Wheeler and Steven Reed were among those who attended the Justice System Community Roundtable on June 26. (Danae Columbus)

Working in small groups, attendees identified key issues which could become the basis for a future CJCC strategic plan. Their recommendations were diverse and wide-ranging. One group led by ACLU Legal Director Katie Schwartzmann prioritized the need to expand mental health services within and outside the jail; the importance of investing in youth programming and educational options, especially for incarcerated youth; and setting policies for NOPD and police training to emphasize alternatives to arrest and de-escalation tactics. Clearly, many attendees displayed a strong distrust for the New Orleans Police Department.

A member of Schwartzmann’s group also discussed how difficult it is for formerly incarcerated individuals to re-enter society because of a myriad of associated costs, fees and fines, let alone the difficulty in finding meaningful employment and affordable housing.

There’s a groundswell of support for many of the programs that are contrary to the philosophy of current District Attorney Leon Cannizzaro. Both Councilman Williams and Judge Landrum-Johnson, both rumored to be interested in the DA’s job, are seizing every chance to differentiate themselves from the current office holder. Neither created the new criminal justice wave, but they are riding it.

This week’s revelation that an attorney working for the Orleans Public Defender’s Office (OPD) was not licensed by the Louisiana State Bar Association is also troubling. The state bar association’s membership directory is easily accessible by the general public. It is unimaginable that the OPD leadership did not conduct such a simple search to ensure a current license was in place.

Unfortunately the young attorney, Ashley Crawford, may never be allowed to practice. Hopefully OPD Director Derwyn Bunton will screen potential employees more closely. In the meantime, many of the 100 defendants whose cases Crawford handled might request a new trial due to improper representation.

Who is looking out for victims? The late victim’s advocate Sandy Krassnof certainly did. Councilman Jason Williams says he is. Katie Schwartzmann thinks organizations like Silence is Violence are filling that role. Derwyn Bunton might not have been. Metropolitan Crime Commission Director Rafael Goyeneche says only his organization and DA Cannizzaro truly speak for victims.

Goyeneche is skeptical about new assessment tools that often recommend release without cash bond. “Violent offenders are not available for free release. Louisiana laws currently mandate money bail,” Goyeneche said. The assessment tools are “great for offenders but not so good for public safety. The public needs to recognize that some of these policies are placing law abiding families and their loved ones at risk.”

Louisiana is a battleground state with millions of dollars flowing in from national organizations. “Offenders are used as victims by these advocates. In the new rhetoric, victims are voiceless,” Goyeneche continued. The MCC will soon be releasing a new study on pretrial assessment that might well point out “the well-intentioned but flawed policies being foisted on our criminal justice system.”