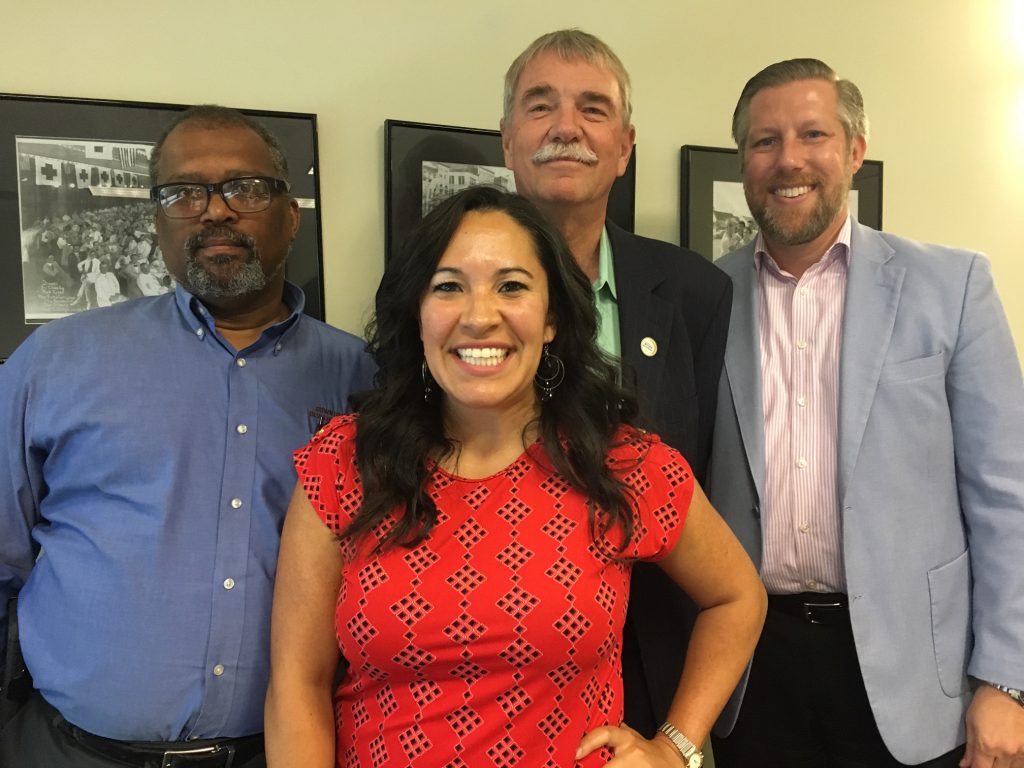 The Committee for a Better New Orleans along with its predecessor The Metropolitan Area Committee have been focused on change at systemic levels for 50 years. Pictured, left to right, are CBNO leaders Anthony Carter, Lindsey Navarro, Keith Twitchell and Tim Hemphill. (Danae Columbus)

Since 1966 the Committee for a Better New Orleans, or CBNO, and its predecessor The Metropolitan Area Committee, or MAC, have created an inclusive, welcoming environment where community leaders work across race and class lines to craft transparent solutions to the city’s most pressing problems. The brainchild of Richard W. Freeman and the Bureau of Governmental Research, the nonprofit was envisioned as the action organization that could take BGR’s recommendations to the next step through research and advocacy. Sharing many of the same goals and board members, CBNO and MAC merged in 2002.

With a diverse board and a small but supportive staff, CBNO focuses on change at systemic levels and wants to ensure that government serves its citizens in an open, accountable manner. To that end, CBNO builds partnerships and fosters collaborations in an effort to increase civic engagement. Among its outstanding programs is the Big Easy Budget Breakdown and the Big Easy Budget Game, which help citizens better understand the nuances of the city budget process.

CBNO also has created a community participation program that informs residents about possible changes in their neighborhoods early in the planning process to allow greater citizen input. CBNO was also heavily involved in the recent master plan review and amendment process. During election cycles, CBNO frequently hosts televised forums where candidates are asked to make commitments on key issues.

CBNO Board President Tim Hemphill says he supports the organization because it helps citizens understand what government does and how to hold government accountable. Vice President Lindsey Navarro says that CBNO provides an important voice for the entire community.

Perhaps the agency’s most well-known program is the Bryan Bell Metropolitan Leadership Forum, which has trained more than 2,500 current and future leaders since 1968. Before the Young Leadership Council or even the Urban League began leadership training, former legislator Bryan Bell saw the need to bring together young professionals from diverse backgrounds for a weekly series of dinners and frank conversation.

The forum still kicks off with an eye-opening bus tour that shows many participants a side of New Orleans they never knew. Each weekly session carries a theme such as housing, education, the environment or economic development. There is also a stand-along workshop devoted specifically to leadership development.

“We at Gulf Coast Bank have been a long term supporter of the CBNO/MAC leadership program,” said Guy Williams. “We enroll one of our bankers every year and have always been pleased with the knowledge that they gain. An additional and substantial benefit is the chance to meet people from across the region and to build friendships in different communities.”

Enrollment for the fall 2019 session is open until close of business Friday, July 26. Though the program was offered at no cost for many years, registration is $400 and can be completed online. After the tragic death of Forum graduate Sharee Walls last year, a scholarship for an emerging leader was established in her name. For more information, contact info@cbno.org or Keith Twitchell at 504-267-4666.

Author Charles Marsala, whose family emigrated to Louisiana from Palermo, Sicily, four generations ago, has uploaded several dozen interviews on YouTube that depict various facets of Sicilian migration to Louisiana and the early life of Sicilian-Americans in New Orleans. Sicilians began coming here in the 1830s, when lemons from Sicily were first shipped through the Port of New Orleans, said Marsala. In 1862, an “Italian Brigade” also played an important role during the Civil War. When 45,000 immigrants of Sicilian descent were residing in the lower French Quarter between 1880 and 1915, the area was known as “Little Palermo.”

Like many other Sicilians, Marsala’s great-grandfather Giuseppe came to Monroe in about 1910 to help build the railroad which ran adjacent to today’s Interstate 20 corridor. The videos are available for viewing on Marsala’s Awe News YouTube channel.

Emerge Louisiana, the state’s most comprehensive training program for Democratic women, will graduate their 2019 class Saturday, June 22 at Ben Franklin High School, 2001 Leon C. Simon Drive. Metro New Orleans participants in this year’s class include Jeannette Gaudry Haynie, LaKeisha Jefferson, Megan Snider, Erica Martinez, Michelle Craig, Fayenisha Matthews, Iam Tucker, Angel Chung Cutno, Rhonda Goode-Douglas and Katherine Williams. Three of this week’s graduates – Erica Williams, Cammie Maturin and Brenda Babin — are running for elected office in the fall along with more than a dozen previous Emerge graduates including Emerge Louisiana co-founder Kea Sherman. Two other 2019 graduates – Ledricka Thierry and Candy Christophe – will be candidates in the 2020 campaign cycle. More than 70 Louisiana women from 24 cities and towns have been trained by Emerge. Doors open at 5 p.m. with the ceremony beginning at 6 p.m. The event is free but reservations are required; see here to register.

The campaign of House District 94 legislative candidate Tammy Savoie has been endorsed by the Sister District Project, a Democratic grassroots organization that works nationally to build and grow progressive power in state legislatures around the country. Utilizing a well-established network of 40,000 volunteers, the group will also focus on Virginia and Mississippi this year. In 2017 and 2018, Sister District helped elect 25 legislative candidates.

This column was corrected to reflect that Kea Sherman is a co-founder of Emerge Louisiana, not the founder.