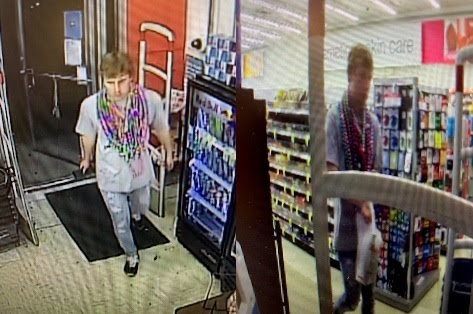 The New Orleans Police Department is seeking assistance from the public in identifying and locating a man accused of stealing a wallet from a drugstore at St. Charles Avenue and Broadway.

The suspect is described as approximately 20-25 years of age with a medium build and brown hair. He was last seen wearing a gray shirt and blue jeans with multiple Mardi Gras beads around his neck.

Anyone with any information regarding the identity or whereabouts of the pictured subject should notify Second District detectives at 504-658-6020. Citizens with information that can help solve crimes are asked to call Crimestoppers at 504-822-1111.