With severe thunderstorm threatening the New Orleans area, today’s daytime parades will roll one hour earlier than originally scheduled. So that they can move out ahead of the storms, only the floats will parade. No bands or dance troupes will perform in Okeanos, Mid-City or Thoth. Bacchus currently remains as scheduled.

The National Weather Service reports that showers and thunderstorms are likely to impact the region Sunday, with the most severe impacts, including damaging winds and lightning, during the mid-afternoon to early evening hours. Rolling the daytime parades will help to clear the route ahead of the period when storms are most likely.

To receive real-time updates from the city, text MARDIGRAS to 888777. Parade goers are also encouraged to stay weather-aware along the route, have a way to receive emergency notifications, and be ready to seek shelter from storms if necessary.

A cold front is expected to descend by the evening, and temperatures are expected to drop for Bacchus, with a low of around 46. The chance of rain tapers off to about 50 percent, according to the National Weather Service. 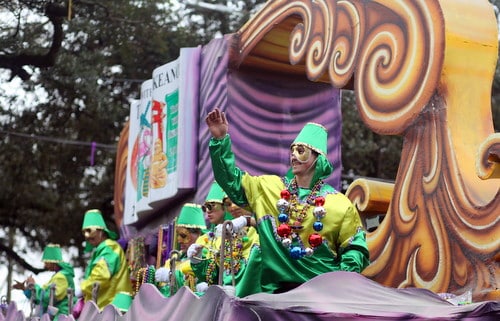 It’s been 70 years since Okeanos was founded, and the krewe is celebrating its anniversary with its fans along the Uptown parade route today. In 1949, a group of downtown business leaders decided to bring a parade to St. Claude Avenue, and the result was Okeanos, named for the Greek god of the oceans and fertile valleys. The parade has more than 250 male and female riders and is sponsored by the Sonaeko (read it backwards) Club. Watch for throws with the 70th anniversary logo. 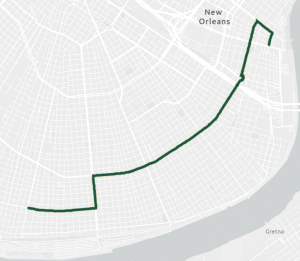 Click to enlarge the Okeanos route map. (via ready.nola.gov) 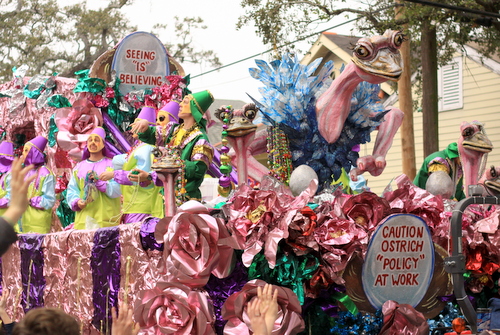 The Krewe of Mid-City’s “Ostrich” float shimmers in the sun. (Robert Morris, UptownMessenger.com)

The Krewe of Mid-City is known for its glimmering floats. It is the only krewe that decorates the floats entirely with colored aluminum foil, and it’s worth seeing just for that. But the krewe is also known for the quality of its bands and the demonstration of its motto: “Pour Le Joie De Vivre.” It paraded in its namesake neighborhood from 1933 until 2002, when it moved to the Uptown route after the Sept. 11 attacks prompted the NOPD to consolidate parade routes. Its theme this year, especially relevant to Uptown residents “in the box,” is “Mid-City Thinks Outside the Box.” 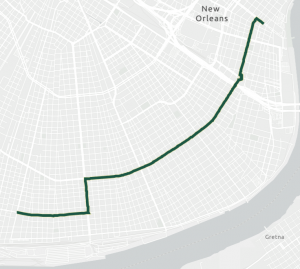 Click to enlarge the route for Mid-City. (via ready.nola.gov) 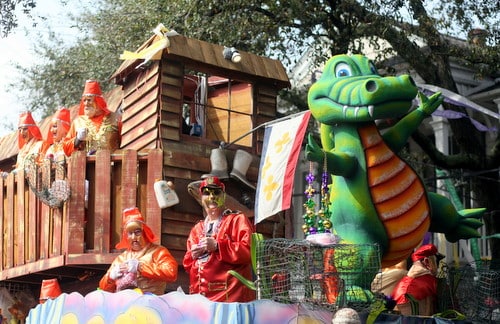 The Krewe of Thoth rolls on Magazine Street in 2018. (Robert Morris, UptownMessenger.com)

The Krewe of Thoth has a generous spirit, seen not only in its throwing habits but in its parade route. The group of men who founded the krewe in 1947 created an Uptown neighborhood route designed to pass in front of 14 institutions that care for people who were not able to attend parades. Today’s 1,600 riders on 50 floats still bring Carnival joy to some of the same health care institutions along its unique route, stretching all the way to Henry Clay and Tchoupitoulas. The theme this year is “Thoth Salutes the Greats.” Watch for guest Grand Marshal Amanda Shaw, who will play as she rides. 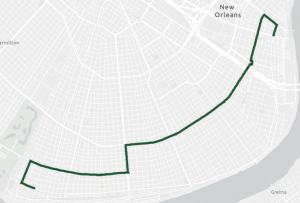 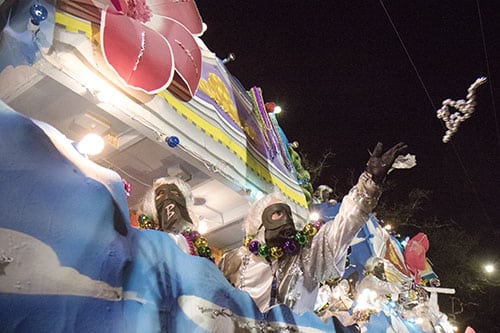 A rider on Bacchus’ “Pegasus: The Winged Steed” throws beads into the crowd.  (Zach Brien, UptownMessenger.com)

Sunday’s only night parade was founded in 1968, but its roots stretch back two decades further to when restaurateur Owen Brennan Sr. created an out-of-towners’ krewe to allow tourists to experience Carnival like a privileged local. Brennan staged balls for the Krewe of Bacchus, and his descendants took the idea further, staging an extravagant parade. Now a superkrewe, Bacchus is known for its spectacular floats and its celebrity monarchs. This year, actor Jensen Ackles, as Bacchus LI, will lead a parade with the theme “Starring Louisiana.” Floats will highlight movies and TV shows filmed in Hollywood South, and throws will include lighted clapperboards and Bacchus Oscars. 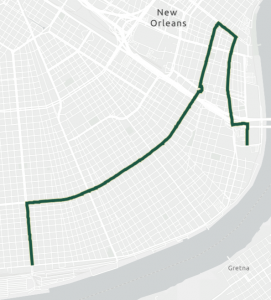 Click on the Bacchus route to enlarge. (via ready.nola.gov)