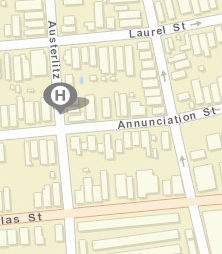 Police officers found a man bleeding from the head in a pickup truck early Saturday in the East Riverside neighborhood. He was pronounced dead at the scene.

The injury was later learned to be a gunshot wound to the head, and the incident was determined to be a homicide.

The Sixth District officers were responding to a call of a male down Feb. 16 at 7:04 a.m. in the 600 block of Austerlitz Street, near Annunciation Street.

NOPD Homicide Unit investigators are currently in the process of gathering evidence and information to identify suspects as well as a motive in this killing.

Homicide Detectives are in charge of the ongoing investigation and can be reached at 504-658-5300 with any information regarding this incident. Citizens with information that can help solve a crime are asked to call Crimestoppers at 504-822-1111 or toll-free at 877-903-STOP.