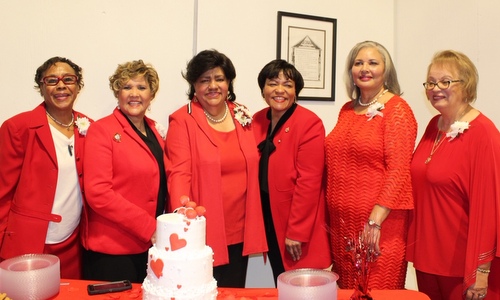 Diana Bajoie smiled broadly when the Downtown Development District’s Kurt Weigle touted $500 million dollars of construction permits issued in 2018. First as the area’s State Representative and later as State Senator, Bajoie delivered billions in capital outlay funds for the Morial Convention Center, LSU Health Sciences Center, the Port of New Orleans and many other organizations which laid the foundation for the New Orleans economy that citizens enjoy today. Working closely with numerous governors and legislative leaders, it was Bajoie’s task to gather support across party and geographic lines.

More than 100 elected officials and community leaders came together last Sunday at the Ashe Cultural & Arts Center to honor Bajoie for her many contributions. “Diana is the godmother of Ashe,” said director Carol Bebelle. Bajoie arranged much of the funding that helped transform the former Dryades Street into today’s vibrant O.C. Haley corridor.

At the tender age of 27, Bajoie was the only woman member of the Louisiana House of Representatives when first elected in 1976. She was the first African-American woman elected to the State Senate and the first woman of either race to take the oath as Senate President Pro Tempore. Bajoie left the Senate in 2008 due to term limits and later served as an interim member of the New Orleans City Council. She was replaced by community activist LaToya Cantrell.

A political science graduate of Southern University in Baton Rouge who later pursued an advanced degree in health care administration, Bajoie is a breast cancer survivor. She is passionate about minority health issues including cancer, school-based health clinics and expanded health care services for those afflicted with mental disorders. As director of community relations for LSU’s Health Sciences Center, Bajoie is the liaison for the deans of the Center’s six schools and twelve centers of excellence.

In the proclamation presented Sunday, Mayor LaToya Cantrell praised Bajoie for her dedication to public service. “Many of our younger elected officials are standing on the shoulders of Diana Bajoie. I would not be here today if it wasn’t for her.”

With District 97 State Rep. Joe Bouie’s recent announcement that he will seek the State Senate seat being vacated by term-limited J.P. Morrell, potential candidates Matthew Willard and Eugene Green are strongly considering the race. Both are members of the Orleans Parish Democratic Executive Committee. 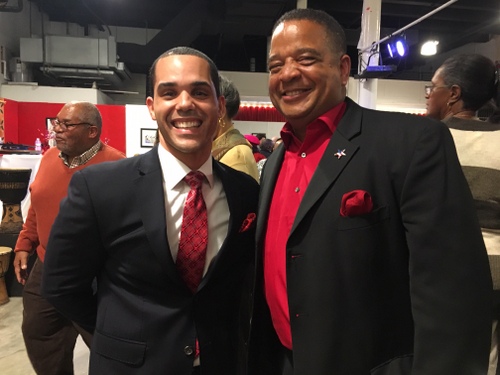 Millennial Matthew Willard (left) could face off against boomer Eugene Green for the Louisiana Legislature next fall. (photo by Danae Columbus)

The grandson of the fabled educator Elliot “Doc” Willard and nephew of Criminal Court Judge Benedict Willard and former Councilmember Cynthia Willard-Lewis, Willard, 30, hails from a politically active Gentilly family that “values community service.” He would be the first of this generation of Willards to seek public office. A graduate of Stuart Hall, Jesuit, and UNO, Willard currently serves as Senior Marketing and Communications Manager at Fluence Analytics, a technology start-up based in New Orleans. He is also a member of the New Orleans Coalition, the Seabrook Neighborhood Association, and is a board member of Jason’s House which assists with low-cost housing for men following their rehabilitation from chemical dependency.

While Willard is not yet prepared to formally announce his candidacy, he is lining up political endorsements and financial support. “Qualifying is still months away. Just because candidates in other races are announcing now, I will wait,” Willard said.

A graduate of St. Augustine High School, Harvard University and Tulane’s A.B Freeman School of Business, Green is a long time real estate management entrepreneur who has been very active in government. Former chief of staff to Congressman William Jefferson, Green also served on the senior staff of Mayor Marc Morial as Executive Assistant for Economic Development. He was President of the New Orleans Regional Business Park, Chairman of the Good Work Network, and is a former member of the City Planning Commission. Green currently chairs the New Orleans Council on Aging and the Action Empowerment Network in the 7th Ward. He is Vice Chairman of the Non-Flood Protection Asset Management Authority, serves on the city’s Industrial Development Board and is a Silverback Society mentor.

Green has run for office several times previously including against Cedric Richmond for Congress and for Councilmember At Large. He received 37 percent of the vote against incumbent Councilmember At Large Stacy Head in 2014. Later In 2014, he qualified for the District 97 special election against Joe Bouie but subsequently withdrew. The seat had become vacant when Jared Brossett was elected to the City Council.

With only two potential candidates so far, voters currently have an opportunity to consider a bright young professional with a familiar family name versus a seasoned entrepreneur who has spent decades working in and around government. Other candidates – including women – could still jump in before the August 8 qualifying deadline.