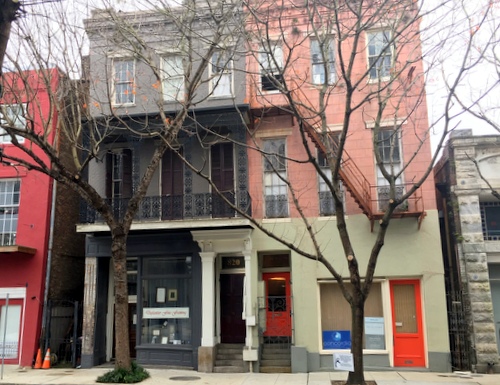 The building at 820-822 Baronne Street. (photo by Danae Columbus for UptownMessenger.com)

Preservationists Mike and Bettye Duplantier bought a run-down historic town house at 820 Baronne in 1978 and enjoyed a bird’s-eye view of the neighborhood’s transition from skid row to prime South Market District real estate. Little did they know that 40 years later a well-meaning young couple would dream of converting the spacious adjoining town house at 822 Baronne into a 10 to 12-room boutique hotel with lobby bar and courtyard. Both buildings share a common attic.

McEnergy Residential broker Ashley Scurria immediately recognized 822 Baronne as a worthwhile development project for her and husband Stuart, regional sales consultant for KLS Martin. Partnering with his parents Dr. Mark and DeAnn Scurria and contractor David Fusilier of Perle Construction, LLC, Scurria is seeking the necessary zoning change to re-purpose the historic 4100 square foot structure with the highest and best use in mind. The building falls within CBD-5 zoning. Hotel occupancy is permitted as a Conditional Use per the Comprehensive Zoning Ordinance (CZO). The zoning designation also permits the operation of a short term rental (STR).

Designed by famed architect Henry Howard for Jewish businessman Abraham Haber, the twin town houses have seen various residential and commercial uses including as a home, law office, boarding house, restaurant, frame shop, graphics business and STR. Restoring 822 Baronne to a single family residence is not a viable option. Between the purchase price of $840,000 and estimated restoration costs exceeding $500,000, affording mortgage payments, property taxes and insurance wouldn’t be easy if the building did not generate income. The Scurrias plan on applying for tax credits to help underwrite development costs. The tax credits would also prohibit them from using the building as their residence for five years.

Scurria’s company, 822 Baronne LLC, hired the architectural firm Concordia to assist them through the process. A boutique hotel was not Scurria’s first choice, Concordia explained to interested property owners at a Neighborhood Participation Program (NPP) meeting on Tuesday. While Scurria plans to utilize every square foot of available space to maximize financial viability, she would have preferred to operate a short term rental (STR). Based on the building’s “bones,” Concordia drew up a development plan that included 12 bedrooms. The maximum number of sleeping rooms allowed under STR regulations for a single structure is 9. The city designates any building with 10 or more bedrooms as a hotel, said Concordia.

A bar in the lobby was originally presented as part of the plan, but the owners have removed the bar from the plan “following the unease noted at the NPP meeting,” Natalie DeLiso of concordia told me this morning — leaving only the 12-room boutique hotel. 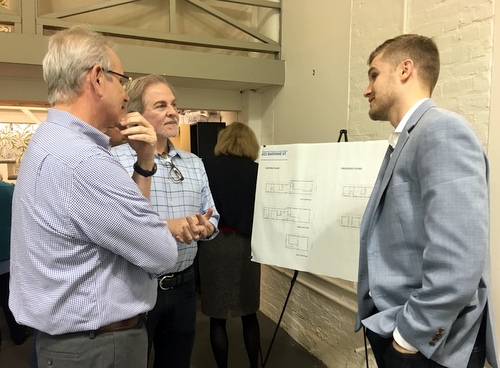 Because the rules governing STRs continue to evolve, some developers are applying for hotel licenses as easier, more stable options. A hotel license is less costly than a commercial STR license but taxes are higher. Hoteliers often complain that STRs benefit from the tourism industry without contributing to marketing costs. A change of licensing from STR to hotel increases the tourism kitty – that same pot of money that Mayor Cantrell has been trying to get her hands on to fund the city’s infrastructure needs. Conversely, some hotels are designating a portion of their rooms as STRs which allows them access to STR marketing platforms. The fluctuation between hotel and STR licenses is only occurring because the City has been too slow in revising its regulations, said one consultant. “This inaction has created a black and grey market that will only grow. People are going to do business one way or another,” he said.

Once the new STR rules are finalized, city leaders are expected to overhaul the laws governing hotels to equalize the playing field. In the meantime, Baronne Street property owners — like me — are weighing the pluses and minuses of the current Scurria proposal. Some neighbors are excited about all the new commercial development which has created more foot traffic and increased property values. Others like the Duplantiers who spent years fighting to close the area’s derelict bars and temporary employment agencies are more skeptical. They consider one neighboring STR nothing more than an upscale “party house” and fear the same thing will happen if a boutique hotel is approved next door.

Ultimately the decision on what kind of commercial developments are allowed rests with District B Councilmember Jay Banks. Jenna Burke, Bank’s go-to person on land use, was on hand Tuesday to ensure all voices were heard.

As taxes, maintenance and insurance costs continue to escalate, more property owners will be selling to younger developers who in turn will seek innovative solutions to make the buildings work financially. While hotels might be today’s answer, future land uses remain a mystery.

STACY ABRAMS & OTHERS TO APPEAR AT KAREN CARTER PETERSON FUNDRAISER

First elected to the Louisiana State Senate in 2010, Carter Peterson is also the first woman chair of the Louisiana Democratic Party and Vice Chair of Civic Engagement and Voter Participation at the DNC.

Former Mayor Landrieu told CNN yesterday that he didn’t think he would run for President because there were several good Democratic candidates already in the race. Don’t count Landrieu out just yet. He could still appear on the Democratic ticket as Vice President, especially if an African-American is selected for the top slot. If Democrats are victorious in 2020, Landrieu could also follow his father’s footsteps as a member of the new president’s cabinet or as an ambassador a la former congresswoman Lindy Boggs.