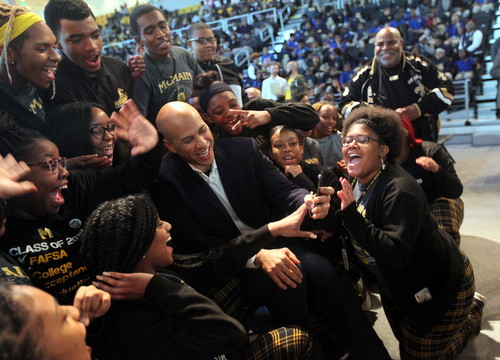 Widely viewed as a top contender for the Democratic Presidential nomination, U.S. Sen. Cory Booker told thousands of New Orleans high school students on Friday morning that they have the power to bring about the next generation of social changes in America.

“The opposite of justice is not injustice,” Booker said Friday morning at Xavier University. “It’s apathy and indifference.”

Booker has yet to declare publicly whether he will run for President in 2020, but has been attending numerous events in the early-primary states of Iowa and New Hampshire, and said last month that a decision was coming soon.

In his introduction of Booker on Friday morning at the “Rally for Excellence” hosted by the Inspire NOLA charter network in honor of Martin Luther King Day weekend, however, U.S. Rep. Cedric Richmond led the crowd of students from all over New Orleans in a chant of “Run, Cory, Run.”

“I want us to give Cory the encouragement he needs to make that decision,” Richmond said, laughing as the crowd chanted. “I won’t say anymore. Cory, you always say to listen to the kids.”

Booker did not respond directly to Richmond’s challenge, but instead spent his address to students relating the story of his father’s purchase of a house in New Jersey. Every time his father visited a house, Booker said, he was turned away by real-estate agents who said the property had already been purchased. Realizing that he was being lied to because he was a black man, Booker’s father enlisted the help of a fair-housing group who recruited a white couple to go through the motions of buying the same house.

On the day of the closing, Booker’s father and his attorney showed up to buy the house instead of the white couple, but before they could speak, the seller’s agent punched the family’s attorney in the face, Booker said. His parents won the case, however, and were ultimately able to buy the house where he would go on to grow up.

“We can’t allow our inability to do everything to undermine our determination to do something,” Booker said.

Years later, Booker met the same housing attorney, a white man, and asked him why as he decided to help black people buy houses in the 1960s. It turned out that the same attorney had been inspired by seeing the courage of the marchers in Selma who were tear-gassed by Alabama State Police — and that chain reaction of inspiration is the lesson that young people should follow.

“By you standing up and standing strong, you make changes you may never see,” Booker said. “That’s how our nation changes.”

While Booker did not ultimately ask the students to vote for him for President, he did have one request as he finished his address to them: a “selfie” photo for his social-media feed. As the Senator pointed his cell phone out at the crowd, cheers rose from the New Orleans students that Booker said would be heard all the way back to New Jersey.

See our Facebook page for video of the entire rally, or the embedded excerpt above for just Booker’s remarks. 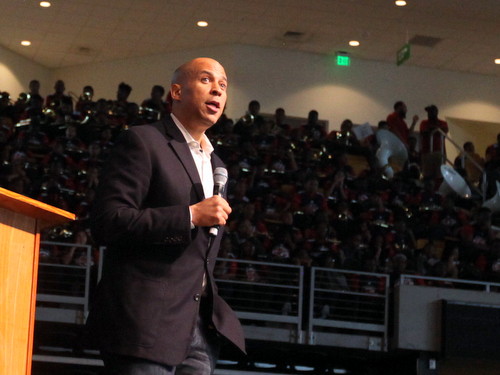