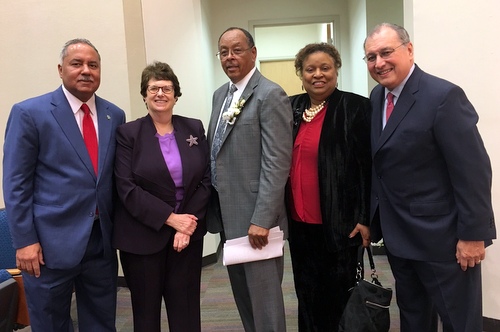 When the 2020 tax rolls open in August, 2019 Assessor Erroll G. Williams is predicting “substantial changes” for properties located in many of New Orleans prime neighborhoods including Uptown, the Lakefront, the French Quarter and the CBD.

Overall, property tax will increase in those neighborhoods as well as the Marigny, Bywater, Treme and Gentilly but could well decrease in New Orleans East and Algiers (except for Algiers Point) where property values – including in the prestigious English Turn neighborhood – have been trending downward.

Williams – who began a new term Tuesday, Jan. 1 – bases his estimates on his 33 years of experience as a New Orleans assessor and the strong team of certified appraisers who are in the process of reviewing the 165,318 parcels and 10,859 buildings that make up New Orleans’ $6.8 billion tax base, the largest in Louisiana. Joining Williams at the swearing-in at his alma mater, Dillard University, were Judge Robin Giarrusso who administered the oath of office, along with Sheriff Marlin Gusman, former Sheriff Paul Valteau, Clerk of Court Arthur Morrell, Appeals Court Judge Terri Love, brothers Bobby and Mark Major, former Commissioner of Elections Suzanne Haik Terrell, former Councilmember Renee Gill Pratt, Claude Mauberret, Marina Kahn, Jackie Fricke, Jacques Morial, Claudio Hemb, Shelia Danzey and Kenny Garrett, who is planning a run this year for the Louisiana Legislature.

Williams began his public service career in 1978 as director of finance under Mayor Dutch Morial. He was the first in a long line of Morial protégées who became an elected official. Williams takes pride in his office’s ability to provide accurate and consistent valuation of properties by leveraging modern data-collection efforts with state-of-the-art assessment practices.

A certified accountant and assessor as well as a licensed realtor who holds an MBA from Tulane University, Williams watches the local real estate market like a hawk. “During the last four years, 300 homes valued over $1 million have been listed for sale in Orleans Parish,” said Williams. “Today the sale of million dollar homes has slowed down. There is still plenty of activity for houses in the $300,000 to $500,000 price range.”

The Gentilly neighborhood is “catching fire, says Williams, especially for young families. “If you can’t afford a $200,000 lot in Lakeview, lots are available in Gentilly for $30,000 to $100,000.” Homeowners are either renovating existing properties or tearing them down to build dream homes.

Williams is a strong advocate of the homestead exemption. “We are proud to have expanded its coverage to veterans and eliminated annual re-filing for this important special assessment. We’ve also made sure to enforce the law so that each homeowner declares only one domicile and thus receives only one homestead exemption,” he explained.

Williams considers the city’s core – especially the Warehouse and South Market districts – to remain hot. “Downtown condominium and residential sales are still going strong. High-end properties at One River Place now fetch $2.5 to $3 million.” Condominium homes at the Standard, the latest project by the Domain Companies, have been selling for between $800,000 and $1.5 million. Of the 41 sales so far, 34 percent were sold to local buyers. Some buyers are only acquiring parking spaces which could easily be flipped.

A strong occupancy rate in the hotel sector is also driving sales. “Real Estate Investment Trusts (REITS) are paying premium prices for New Orleans hotels,” Williams explained. Six or eight new hotel projects are coming on line including the upscale “apartment hotel” Domio which opened over the weekend at 888 Baronne St. Williams says the average hotel occupancy rate nationwide is 61 percent while the occupancy rate in New Orleans much higher at 76 percent. “Right now the hotels are still making money. With all these new properties, occupancy rates are eventually going to drop.” Williams is also closely watching the short-term rental market. “Hotels are engaging in short-term rentals as are time shares, condominium projects and even apartment complexes.”

Williams is concerned about the many properties – about 8 percent of the City’s total inventory – owned by nonprofits and therefore tax-exempt. He has created an online directory of affected properties to help the public better understand the extent of the problem. Each of these properties consumes public services including fire and police. “They should pay something. That’s just fair,” he remarked. Williams is disappointed that no one in government is putting forth suggestions to address the issue which he considers a legislative matter that will need a legislative solution.

Williams says property taxes generate almost $600 million annually for the citizens of New Orleans and help fund schools, parks and streets. “Because our office is now modernized, we all know more about our community, its values and our mutual commitment to improving our worth as a place to live and work. We solve problems, and solve them with honesty.”

Danae Columbus, who has had a 30-year career in politics and public relations, offers her opinions on Thursdays. Her career includes stints at City Hall, the Dock Board and the Orleans Parish School Board and former clients such as District Attorney Leon Cannizzaro, City Council members Jared Brossett and Helena Moreno, Foster Campbell, former Lt. Gov. Jay Dardenne, former Sheriff Charles Foti and former Councilwomen Stacy Head and Cynthia Hedge-Morrell.