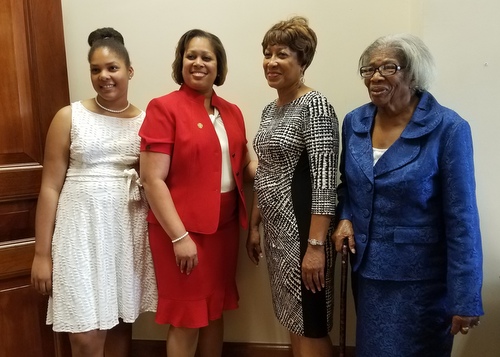 Chelsey Richard Napoleon (second from left) poses for a photo with her daughter, mother and grandmother after filing her election paperwork on July 18, 2018. ( UptownMessenger.com file photo)

The impact of women marching to victory across America are played out in Louisiana where three women either won their races or are headed into runoffs. Democrat Gwen Collins-Greenup, a lawyer, accountant and minister from East Feliciana Parish who only raised $3000 and rarely campaigned in New Orleans, stunned the state’s political establishment by running a strong second for Secretary of State in a crowded field.

Insiders contribute Collins-Greenup’s success in part to her history of service in the community and a very recognizable last name to African-Americans. Some New Orleans voters might have thought she was related to the many Greenups in this area. She will have a tough battle against the much better funded Republican current Secretary of State Kyle Ardoin who only took office several months ago. A former lobbyist and parish elected official, Ardoin entered the race at the last minute but made very good use of his incumbency. Ardoin is strongly favored to win. For Collins-Greenup to win, she will need lots of financial and organizational support from the state Democratic Party as well as an army of grassroots donors. If not, she will lose just like Derrick Edwards- last year’s unsuccessful Democratic candidate for State Treasurer.

Chelsey Richard Napoleon was not supposed to win the Clerk of Civil District Court race which pitted her against a likeable City Councilman with deep pockets and extensive name recognition. This was her one chance to emerge from behind the scene and shine. Pundits worried that voters would believe a late attack spot which attempted to damage Napoleon’s reputation. The spot backfired when Napoleon successfully answered the allegations. Women and African-Americans turned out in big numbers for the single mother who put herself through law school at night while working during the day in the Clerk’s office.

Perennial judicial candidate Marie Williams coasted into the runoff for Civil District Court Division E and will face first place finisher Omar Mason. Well-connected attorney Richard Perque — who some thought would lead the competition — ran third. Williams relied entirely on family money but spent it wisely. Mason is the favorite of the business community, lawyers and probably most of the judges. Williams will be a favorite with less affluent African-Americans and females who are sympathetic to her many struggles. This race could turn out like the Yolanda King/Doug Hammel contest where King slipped past Hammel. King was later removed from the bench.

[Correction: An earlier version of this column incorrectly described Richard Perque’s involvement in the runoff between Marie Williams and Omar Mason. Perque told Uptown Messenger on Friday, “I have not endorsed anyone in this race and have not made any decision to do so.” The above paragraph has been updated to describe his status properly.]

In the remaining race on Tuesday’s ballot for Clerk of First City Court, former legislator Austin Badon parlayed his citywide name recognition and affability into victory. Look for Badon to take charge of the Clerk’s office early next week.

TRUMP, DEMOCRATS, WOMEN – EACH HAVE SOMETHING TO CROW ABOUT

In an election cycle that was as much about sending a President Donald Trump a message as it was about the candidates, Trump, Democrats and women are all pleased — albeit for different reasons. Judge Brett Kavanaugh’s nomination to the Supreme Court fired up Democrats who took back Congress by the election of rising stars with a more balanced message that resonated with voters. Republicans caught the wave too after President Trump spent several weeks re-energizing his base. Conservative white men now solidly embrace President Trump’s rather unique style of populism while suburban women shifted toward the core values the Democrats represent. Each group has become more entrenched.

Even though none of the four Louisiana women running for Congress defeated their opponents, women made great strides across the country in state, local and congressional races. When Congress begins in January 2019, there will be 100 women members including Muslims, former refugees, LGBTQ women and more women of color. Potentially Nancy Pelosi could return as Speaker of the House.

President Trump takes great pride in his success on changing the tax structure, limiting immigration and appointing more conservative judges. But it’s a new day. With the Democrats congressional victory, the President must now operate in a much more bipartisan fashion. Voters said that health car care was their top priority. Look for Democrats to address that and other issues from their perspective and probably tie up the Administration in numerous investigations until the 2020 election.

Under the direction of Tommy Screen, the Institute of Politics has been the premier training ground for individuals interested in politics for 40 years. Founded by pollster Ed Renwick, IOP has graduated hundreds of political players. For more information or tickets, contact Screen at 865-3548.

When former Times-Picayune political reporter is eulogized Saturday at St Pius, the sanctuary will overflow with family, friends, media and politicians who admired the must-respected writer for his even-handed reporting. Maybe even several members of NOLA.com’s management will attend. Though NOLA.com thoroughly praised Donze in an obituary, editors forgot to mention that Donze was one of dozens of faithful staffers who were dismissed when the paper went digital. While Donze finished his career at the Audubon Institute, he would have preferred working as a newsman until his dying day.