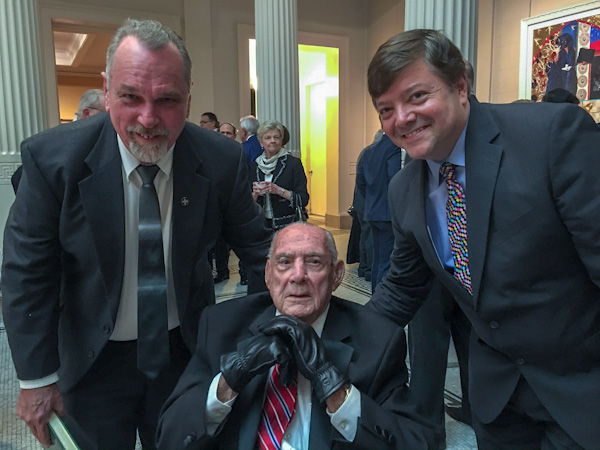 Former Lt. Governor Jimmy Fitzmorris with Joseph Berry and Jeff Courere at NOMA for the film premiere of FITZ! (photo by Danae Columbus for UptownMessenger.com)

On the eve of his 97th birthday, almost 200 admirers turned out last night to honor former Lt. Governor Jimmy Fitzmorris at the NOMA premiere of a new documentary on his life and political legacy. Co-produced by Jeff Courere and his sister Pat Denechaud, the film will begin airing tonight on WLAE-TV at 8 p.m. and will also run on statewide public television in 2019. In his opening remarks, current Lt. Governor Billy Nungesser said that if today’s public officials “can do half the job Jimmy Fitzmorris did with love and passion for Louisiana, our careers would be a success.”

By any measure, Jimmy Fitzmorris has lived a remarkable life. A devout Irish-Catholic who was strongly influenced by Jesuit teachings, Fitzmorris graduated from Jesuit High School in 1939 and adopted its motto of service to others. Former State Senator Mike O’Keefe attended Jesuit and Loyola University with Fitzmorris and said “Jimmy is the epitome of a good public official.” Fitzmorris left Loyola to work at Kansas City Southern Pacific Railroad where he began as a messenger boy and eventually rose to Vice President. Yet, Fitzmorris had a calling for public service.

“My dad ran for office ten times – he won five and he lost five,” said daughter Lisa Fitzmorris Clement. Fitzmorris was elected to the City Council in 1954 and later ran for mayor unsuccessfully against Vic Schiro and Moon Landrieu. Former Insurance Commissioner and Secretary of State Jim Brown believes that Fitzmorris would have defeated Schiro had not Hurricane Camille given Schiro an extraordinary media platform. “Jimmy was completely committed to public life. I never saw a guy who could relate to people like him,” said Brown. Though Fitzmorris ran first against Landrieu in the 1969 mayoral primary, many voters who supported the nine other candidates came on board with Landrieu in the runoff.

Starting in 1971, Fitzmorris was twice elected Lt. Governor and also served as President of the State Senate until the new 1974 state constitution mandated that the Senate choose a president from its elected membership. Fitzmorris chaired the state’s tourism development board and quickly built a tourism infrastructure that other states only dreamed about. “Jimmy’s contribution to the growth of tourism in Louisiana is immeasurable,” said Bill Langkopp, executive vice president of the Louisiana Hotel and Lodging Association. Under Governor Edwin Edwards, Fitzmorris also led the charge for industrial development and used his magic touch to bring businesses and jobs to the state. “Jimmy is an honest, truthful and trusted leader for Louisiana,” said Ken Pickering, former state banking commissioner.

Fitzmorris entered a large field in the 1979 race for Governor and just missed making the runoff in a bitter contest which then pitted Republican Dave Treen against Democrat Louis Lambert. Immediately after the primary, Fitzmorris sued Lambert over election impropriety but the suit was dismissed. A life-long Democrat, Fitzmorris received significant pressure – including from President Jimmy Carter – to endorse Lambert but instead selected Treen. “Jimmy is a fair and even-handed man and one of the greatest public servants of my lifetime. He would have made a great governor,” said former Mayor Moon Landrieu. Fitzmorris subsequently served as Special Assistant for Industrial Development and became Treen’s “salesman with unlimited opportunities.” “Jimmy Fitzmorris has as many friends in the Republican Party as the Democratic Party. He is a man who cares for others, loves his city, state and country, and wants to serve” said Courere during remarks last night. “Jimmy Fitzmorris was a great Lt. Governor – one of the best,” said former Governor Edwin Edwards.

Throughout his career, Fitzmorris was also leader in civic affairs and was instrumental in the growth of Mount Carmel High School, where a building is named in his honor. Fitzmorris installed Mount Carmel’s student council officers for more than 50 years. “Jimmy encouraged young people to get involved,” said New Orleans District Attorney Leon Cannizzaro. According to son-in-law Bruce Clement, Fitzmorris was active with dozens of non-profit organizations including the Chamber of Commerce, the United Way, Traveler’s Aid, Muscular Dystrophy, Easter Seals, March of Dimes and St. Michael’s Special School. All benefitted from his Irish charm and big heart. “If we would spend as much time helping people as we spend hurting people, what a great world it would be,” said Fitzmorris. Loyola University awarded Fitzmorris an honorary doctorate.

Jimmy Fitzmorris is Louisiana’s elder stateman hailing from a time when there was civility in government. Thank you Fitz for your many years of service to the people of Louisiana.

More than 100 New Orleans business, civic, and political leaders are expected to brave the cold this evening to participate in Covenant House’s 7th Annual Sleep In which takes place on the sidewalk outside their Rampart Street shelter. Civic activist and Covenant House board member Martha Landrum who chairs the 2018 event has spent months drumming up participation. Last year’s Sleep In attracted 165 sleepers who together raised $465,000. During the last seven years, Covenant House has grown from housing 45 young people per night to 162. Among the teams participating this year includes a group from Loyola University Law School headed up by Dean Madeleine Landrieu and professor Nick Davrados.

BRING A COAT FOR DR. KO AND DANCE THE NIGHT AWAY AT NOCCA

For the last 26 years, Sen. Troy Carter has coordinated a complimentary Thanksgiving meal that includes live music and entertainment. Open to the public, this year’s event will take place on November 17 at the Behrman Gym, 2529 Gen. Meyer Ave in Algiers. Volunteers are still needed. Call 510-9000 to help.