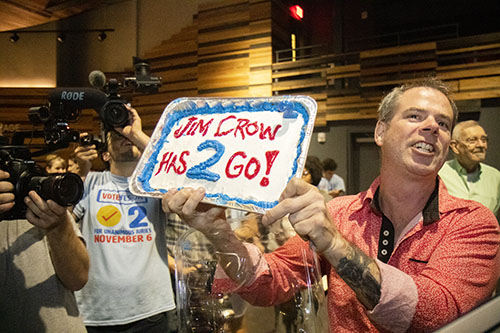 Bruce Reilly shows off a cake he and his daughter Kira Love, 9, made together, in honor of Amendment 2, which will require unanimous juries in non-capital felony cases. Supporters of the state constitutional amendment gathered in the Jazz Market on Nov. 6 to watch election results come in. (Zach Brien, UptownMessenger.com)

Supporters of Louisiana’s Amendment 2 gathered Nov. 6 at the New Orleans Jazz Market on Oretha Castle Haley Boulevard to watch election results at a party put on by the Unanimous Jury Coalition. The amendment requires unanimous juries to convict people of any felony count.

Going into Tuesday night, Louisiana and Oregon were the only states where defendants can be convicted of felonies without unanimous verdicts. Non-unanimous juries are considered a vestige of the Jim Crow era, when racial segregation was written into laws after the Civil War. Unanimity already was required in capital trials and those for lesser felonies decided by six-member juries.

At around 10 p.m., it was announced that the amendment passed with 64 percent of the vote, ending the 120-year practice. It take effect next year, when it will be applied to trials involving crimes committed on or after Jan. 1, 2019. 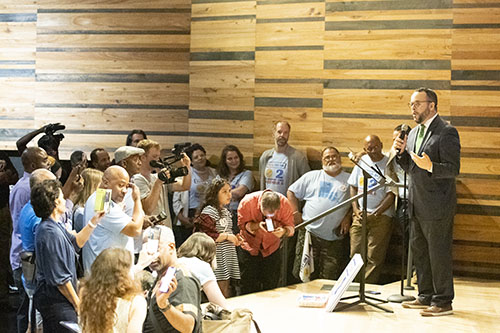 State Sen. J.P. Morell, D-New Orleans, addresses the audience after the voters ruled in favor of Amendment 2, a cause Morell lead. “In one night, you have fundamentally changed criminal justice in the state of Louisiana,” Morrell told the crowd. (Zach Brien, UptownMessenger.com)

“In one night, you have fundamentally changed criminal justice in the state of Louisiana,” said Morrell to the crowd at the Market shortly after news that the amendment passed. “I was putting my 2-year-old to bed. I had chills. I said, ‘You know what? This kid is going to wake up in a different state.’”

People were surprised by the bipartisan support. Democrats do not hold a majority in the legislature, so this was key to its passage, according to Morrell.

“This bill passing was a combination of your (the Unanimous Jury Coalition) hard work and decades of relationships built across this state to bring people together who never agree on anything to say, now is the time,” Morrell said.

Morrell pointed to the efforts of Sherman Mack, a Republican state representative from Livingston Parish in north Louisiana. Mack was vocal on the issues, saying that it is time to end the practice of sending people to prison without unanimous verdicts.

Katherine Walden, a recent transplant to New Orleans from Philadelphia, has volunteered with the Unanimous Jury Coalition for the past three months. She said working with the group has taught her a lot about New Orleans, but the bipartisan support for the bill is something that stuck out to her.

“I think one of the most eye-opening parts about this amendment is the bipartisan support for it,” Walden said. “It was the first time really truly engaging with the opposite party. Whether you identify as a Republican or a Democrat, being able to engage with both sides was a real learning experience.”

Representatives from the local ACLU chapter and Southern Poverty Law Center spoke at the event. Alanah Adams Hebert of the ACLU of Louisiana called out the historical context of this amendment.

“You told the white supremacists that gathered in a convention in 1898 to roll over in their graves,” Adams Hebert said. “We are striking a victory for justice tonight.” 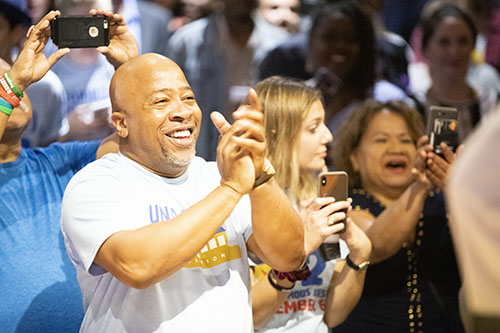 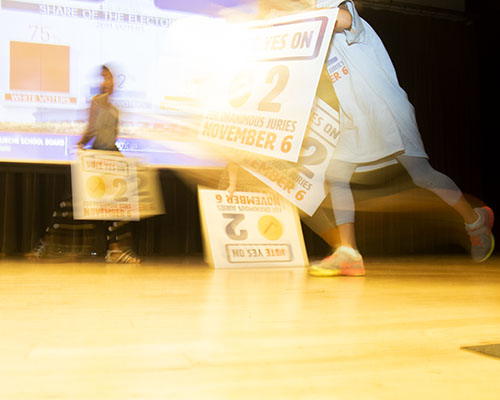 Kids play with “Vote Yes on No. 2” signs at the New Orleans Jazz Market. Supporters during the victory celebration on election night. (Zach Brien, UptownMessenger.com)