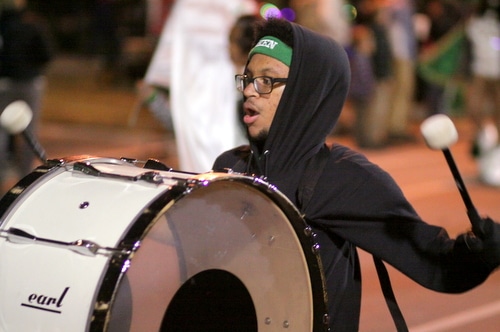 After dozens of students, parents and teachers complained to the board of New Orleans College Prep earlier this month about the impact of emergency layoffs, officials at the charter network promised Monday they have determined the system’s finances have stabilized and that no more layoffs are expected.

“Our finances are stable, which means we do not foresee any need for further layoffs,” said College Prep board chair Patrick Norton.

School this fall at College Prep’s two campuses, Walter L. Cohen high school and Crocker elementary, with about 40 fewer students than expected, causing a shortfall of nearly $450,000 in state per-pupil funding. In addition to a number of other cost-saving measures, the College Prep administration laid off seven non-teaching staff members — prompting the numerous expressions of concern by members of the school community at an Oct. 1 board meeting.

The College Prep governing board convened again Monday night, and Norton opened the meeting with a lengthy statement of reassurance. He praised Oct. 1 crowd for their energy, candid questions and observations, and said the board began investigating their comments immediately after the meeting.

The school community has four primary concerns about the layoffs, Norton concluded. They are worried about College Prep’s ability to meet its students’ “social and emotional needs” and to “supply a stable learning environment,” and desire more financial transparency and collaboration with the school leaders.

Based on administrators’ reports about those concerns, Norton said improvements are now being made to the social services, staffing and communication.

“We now think we are better able to help students in emotional distress than we were at the beginning of the year,” Norton said. “… We have reviewed our entire program enhancements with senior officers of the Orleans Parish Schol Board and have received their approval of our approach.”

On staffing, all the “core” academic classes at Cohen are now fully staffed, including an Algebra class that many students complained about on Oct. 1, said Cohen principal Darren Lewis. The only vacancy remaining is a boys physical education teacher and an assistant principal, both of which have strong candidates and should be filled within about a week, Lewis said.

At Crocker, meanwhile, only three positions remain vacant, said principal Kevin Word, a preschool teacher, a speech therapist, and a middle-school math teacher. The math position has been the most challenging to attract qualified candidates for, Word said, but he would prefer to keep using substitutes until he can find a full-time teacher he is confident in.

From a financial standpoint, enrollment has held steady at the numbers used for budgeting following the layoffs, and Crocker has slowly added a few students, said chief financial officer Jonathan Tebeleff. Meanwhile, private fundraising has exceeded expectations, and grants now expected by the school are projected to total $1.1 million for the year, instead of the $900,000 “conservatively” forecasted earlier, said development director Hillary Hoffer.

“New Orleans College Prep schools are on the right track,” Norton concluded. “We are open, vibrant, and will continue in the mission of educating children now and for years to come.”

Monday’s meeting did not draw the auditorium-sized crowd from earlier in the month, but did have a number of attendees return, including two faculty members who said the loss of support staff continues to be felt in day-to-day teaching.

In particular, the loss of the dean of discipline has made it more difficult for teacher to get help with behavior problems, said Karen Murphy, an English teacher at Cohen. Those staff members were key participants in the disciplinary process, Murphy said, and teachers need a better way of communicating with school leadership in their absence.

“With all these shifts right now, teachers need to be supported,” Murphy said.

Jasmine Sobrist said that students who lack English proficiency are also being affected, as they are being punished for perceived infractions or insubordinance in situations where a language barrier prevents them from explaining themselves.

“With that lack of a cultural connection and lack of language, we’re going to be losing some of our [English learners],” Zobrist said. “I don’t feel right now that behaviors can be supported outside what I can do in the classroom.”

Board members discussed a number of possible solutions, such as creating a teacher committee to give feedback to adminstrators or translation options. They thanked the teachers for their reports and encouraged them and other community members to keep attending board meetings.