The premise of the film is as follows:

For the boys on the Davis Park team, it’s not a matter of if they’ve been exposed to violence– it’s how often. In their young lives, they’ve already attended funerals for slain family and friends, and stepped off school buses to the sight of flashing blue lights and yellow crime scene tape. They can tell the difference between fireworks and gunfire, and they know what to do when they hear the latter.

Video-journalist-turned-director, Emma Scott began shooting the short documentary in September of 2017. She chose Central City as the focal point because of its historical important to New Orleans and its significant level of violent crimes. 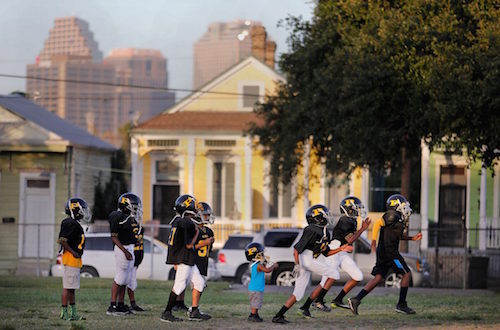 “[We chose] Central City in particular because that’s where the reporters felt they were getting called to for crime scenes,” Scott said. “Central City has this incredibly important historical meaning to the city… It’s the heart of the Mardi Gras Indian tradition, it’s where the Civil Rights Movement in the city was centered, [however] it’s also one of the neighborhoods that has one of the highest crime and poverty rates.”

The Children of Central City uses the experiences of Panther football team players and coaches to help discuss a mental health issue typical of children in high-crime areas: how chronic exposure to violence effects children.

The kids of the A.L. Davis Park Panthers youth football program live and play in one of New Orleans’ most culturally significant and crime-riddled neighborhoods. Jerome Temple, AKA DJ Jubilee, a New Orleans bounce music legend, has coached the Panthers since 1997—and counts 28 former players killed in the 21 years since.

Scott said reporters Bullington and Webster were going out to crime scenes and seeing children all the time. They started to think about how that impacts children’s lives long-term, and how it impacts their education.

“I think we learned a lot about what it does to brain development and brain function, and how challenging it is for kids to go to school and succeed in life when they’re constantly surrounded by violence,” Scott said. The Children of Central City was produced as a project for the Dennis A. Hunt Fund for Health Journalism, a program of the USC Annenberg Center for Health Journalism, in partnership with NOLA.com. Once finished, the plan was to get the film out to as large an audience as possible. Several people suggested applying to film festivals as a way to get the word out about the film’s issues, so New Orleans Film Fest was the team’s obvious first choice, especially given its audience.

“We thought, maybe there’s an audience here that we’re not getting on NOLA.com, but who are engaged New Orleanians,” Scott said. “Obviously, we want to get this story to the national level, but I think, if we’re going to make change, it’s going to have to come from people in New Orleans, or people working in government in Baton Rouge who are going to see it.”

The doc premiered in Washington, D.C., earlier this year and has been submitted to a few other festivals. It has also been used locally in advocacy settings. United Way hosted a screening in Central City where city council members and the mayor were in attendance. Since the film’s release, city council has made clear steps toward combating this issue (see here and here).

The film is being used as a teaching tool for not only politicians, but also to help train bus drivers, “so they better understand who the population of kids are and what they face everyday,” according to Scott.

With the success of this film, Scott and team would plan to expand and cover similar projects in other New Orleans neighborhoods. Scott hopes “for New Orleans public schools to be trauma-informed, with citywide measures looking at childhood trauma and how to get more mental health care for people who have trauma due to experiencing violence in some degree.” 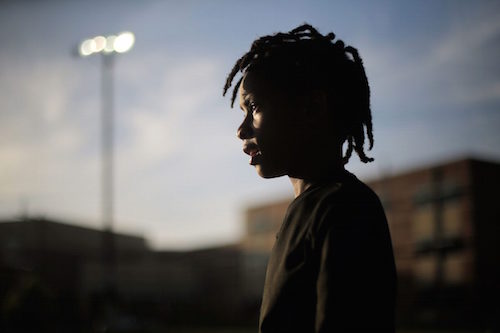 Ji’Air Luckie, 10, one of the stars of “The Children of Central City.” (photo credit: Brett Duke, courtesy of Dir. Emma Scott)

As part of NOFF, The Children of Central City will screen at 7:30 p.m. on Tuesday, Oct. 23 at Prytania Theatre, and again at 4 p.m. on Thursday, Oct. 25 at The Ranch Theater at the Contemporary Arts Center.