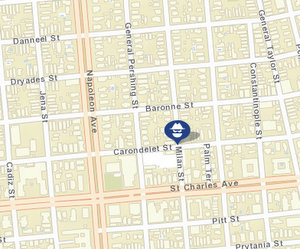 A man tried to rob a business on Milan Street at gunpoint Monday morning, but his clumsy handling of his firearm gave the business owner the opportunity to escape, New Orleans police said.

Shortly before 11 a.m. Monday, Sept. 17, the gunman walked into the business in the 1700 block of Milan Street (between Carondelet and Baronne Streets) and tried to rob the owner, a man in his 60s, according to the initial NOPD report.

“In the process, the subject dropped the handgun to the floor and the magazine came out,” the report states. “As the subject scrambled to get the gun back together, the owner took the opportunity to run from the location and scream for help.”

The suspect is described as a tall black man with a low haircut, wearing a black shirt and jeans, the report states.