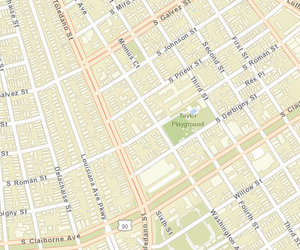 Friday morning’s incident has not yet been loaded into NOPD crime maps. (via NOPD)

A woman’s ex-boyfriend forced his way into her Toledano Street home overnight, beat her and threw her down the stairs, New Orleans police said Friday morning.

The man got inside the home in the 3100 block of Toledano Street (between South Prieur and South Roman streets) through an open window around 2:30 a.m. Friday, June 15, according to the initial NOPD report. He hit the victim — a woman in her late 20s — in her face, dragged outside and threw her down stairs, then left, the report states.

Police are seeking a warrant for his arrest, the report states. The incident is classified as an aggravated burglary, which usually describes a break-in at an occupied home that involves some sort of weapon or attack.