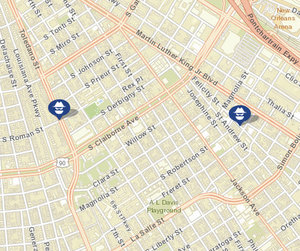 Shortly before 2:30 p.m. Wednesday, June 6, a woman in her 20s was getting out of her vehicle in the 2400 block of Felicity Street (near South Robertson) when a man approached from behind and drew a gun from his waistband and pointed at her, according to the initial NOPD report. He took her belongings, then left in an unknown direction, the report states.

In a separate incident, police are also investigating another robbery reported Wednesday afternoon that actually took place on Tuesday, reports show. Around 3 a.m. Tuesday, June 5, a man in his 40s was “attempting to buy drugs” from an acquaintance near Toledano and South Roman streets, when the deal went bad and the two began fighting, the report states.

Further details were not immediately available in either case. Anyone with information is urged to call the NOPD Sixth District station at 658-6060 to speak to a detective, or CrimeStoppers at 822-1111 to leave an anonymous tip that could be eligible for a cash reward.