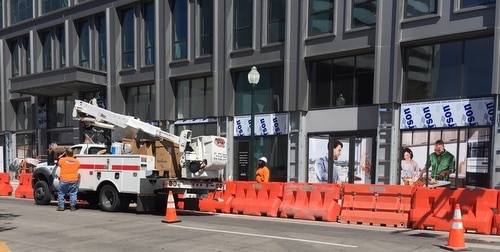 CBD property owners and residents were more than surprised to learn that Mayor Landrieu’s administration withheld almost $800,000 from the budget of the Downtown Development District (DDD) from 2014 to 2016 to help satisfy the city’s pension obligations. The DDD would have applied the money to increase public safety, better address the homeless issue, or make other quality of life improvements as determined by their strategic plan.

Though the DDD board — all appointed by the Mayor — was fully aware of the money-grab, it was not common knowledge among the thousands of property owners who fund the DDD’s annual budget, $7.8 million in 2018. Created in 1974 by an act of the Louisiana Legislature, New Orleans’ DDD was the country’s first assessment-based business improvement district. In 1978 voters approved a 22.97-millage complement of property taxes on all real property in the district roughly bounded by Iberville Street, the Mississippi River, the Pontchartrain Expressway and the Superdome.

When the DDD was founded, downtown property uses were light industrial and commercial with office space for banking, legal, accounting, architecture, and oil and gas related businesses and warehouses to support the booming maritime industry. The Superdome was only three years old and the Rivergate served the city’s nascent tourism needs. There were only a handful of residents actually living downtown.

Since Hurricane Katrina, more than a billion dollars has been invested in downtown New Orleans. During the last five years, 60% of downtown New Orleans’ vacant and underutilized space has been put into commerce. Today the District is alive 24 hours a day with thousands of residents living in single family homes and condominiums while hotels, short term rentals or retail uses occupy every available corner. The DDD’s mission is much more attuned to building a vibrant downtown that is recognized as a world-class destination for residents and visitors while also encouraging growth in tourism, the arts, digital media and the bioscience industry.

Downtown office workers and residents enjoy DDD support of the area’s many cultural activities and festivals including the Young Leadership Council’s Wednesday at the Square (Lafayette Square, that is) annual concert series that began last night. The DDD does a good job of keeping downtown clean and litter free through their Clean Team program and a Sanitation Ranger. The DDD is playing a leadership role in redefining Duncan Plaza and creating the new low barrier shelter for the homeless. The DDD is devoting more financial resources to public safety including private armed patrols evenings and overnights and providing additional security at public gathering places.

But the DDD has not properly communicated with the public and the property owners who fund their budget regarding the Landrieu money-grab. The DDD’s enabling legislation clearly intended that the millage provided by the special tax levied on property owners only be used to support the agency’s mandate. The Louisiana Supreme Court agreed in 2007 that any other use would violate the state’s constitution.

Oftentimes mayors do what they want and can do, regardless of how their actions might impact citizens. Mayors often tell members of board they appoint to follow their lead or resign. The DDD’s money is collected and distributed by the city. If the city administration decides to skim a little off the top every now and then to fill another budget hole, what can the DDD board and staff do? Beg, plead and hope for the best.

The property owners in the DDD’s jurisdiction pay the city’s highest property tax rates. They deserve the right to know – in real time – how every one of their dollars is being spent. Surely the Landrieu administration could have found a way to fund their pension obligations without taking it away from the public agency whose stakeholders generate a significant portion of the city’s budget and are the pulse of the city’s future.

Former School Board president Gail Glapion is on a mission. She wants to raise enough funds to “re-birth” the former New Orleans African American Museum which has yet to re-open after suffering from Hurricane Katrina, asbestos, termites and the downfall of First NBC Bank which held their mortgage and associated tax credits. Glapion and other supporters will gather Tuesday evening at Dooky Chase Restaurant from 6 p.m. – 8 p.m. For more information, contact Glapion at 452-4446.