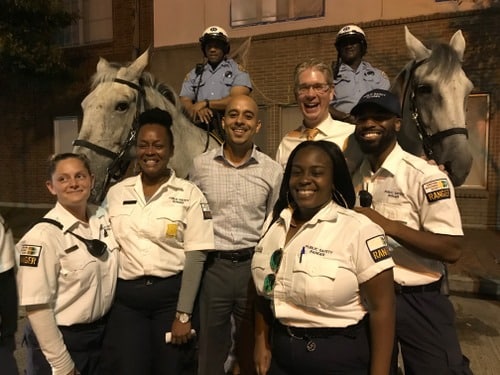 Attorney Royce Duplessis and Downtown Development District director Kurt Weigle pose for a photo during the National Night Out Against Crime. (photo by Danae Columbus for UptownMessenger.com)

While Louisiana Secretary of State Tom Schedler is expected to formally certify the election of State Rep. Helena Moreno to the New Orleans City Council later today, potential candidates including attorney and City Planning Commission member Royce Duplessis are already lining up for the District 93 race.

Moreno won the Council-At-Large seat by a wide margin last Saturday but does not take office until May 1, 2018. The 2018 session of the Louisiana Legislature begins March 12. Moreno could serve until April 30 or resign anytime after certification. Moreno says she will be talking with Governor John Bel Edwards before making a final decision on her resignation date. Only after that can Governor Edwards call the special election to fill the vacancy her departure will create.

For the last 7 years, Moreno — though a Democrat from the Orleans Parish delegation and — has nurtured many important relationships with Republican legislators around the state. Her legislative priorities have included equal pay for women, access to health care, domestic violence and sexual assault, substance abuse services, services for seniors, re-entry programs and criminal justice reform. She is currently chair of the Louisiana Women’s Legislative Caucus.

Filling Moreno’s shoes with a qualified, battle-ready, team player will be critical to the City’s future legislative success. Former colleagues say Duplessis has the training and experience to easily step into the role.

Duplessis has been a member of the New Orleans City Planning Commission for 5 years and currently chairs it, and he is immediate past president of the Louis A. Martinet Legal Society. He is married, resides in Central City, and is in private practice.

Whether Governor Edwards calls this election for spring or fall 2018, there could be a large field of candidates. It would behoove any potential contender to start raising money and building a campaign structure early. Duplessis has been reaching out to key decision makers for several months now. “Royce has a strong track record of service and is imminently qualified to serve the residents of House District 93,” said former Councilmember James Carter.

Also said to be considering the race is insurance exec L.J. Falgout.

Congratulations to all the candidates who showed the fortitude, grit, funding and political acumen to make it to the runoffs. In each of the five races – State Treasurer, Mayor, Civil District Court Judge and City Council Districts B and E – there seems to be great differences in the candidates’ image and personal styles. Though the issues are generally the same within each race, it is the approach to problem solving and overall vision that distinguishes candidates. During the next few weeks citizens have the opportunity to attend forums and ask the tough questions their future leaders must be willing to answer in real time. Nothing beats personal contact. Take the time to learn more before the November election.