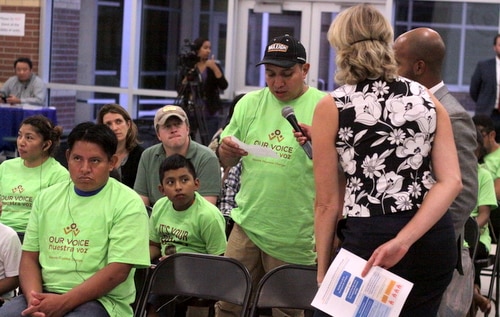 A member of the Our Voice/Nuestra Voz advocacy group reads a question in Spanish during a town hall on education Thursday night. (Robert Morris, UptownMessenger.com)

Spanish-speaking families need more assurances that their children won’t be discriminated against while at schools, and more insight into the way that the school district funds teaching English as a second language, an advocacy group told Orleans Parish School Board officials at a town-hall meeting Thursday evening in Central City. 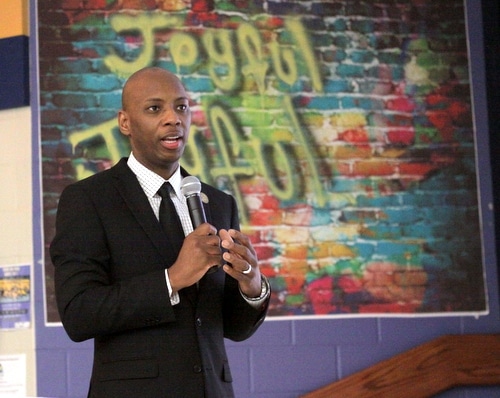 The town hall was hosted by Orleans Parish School Board superintendent Henderson Lewis Jr. to present the results of a survey of thousands of families about the school system and to discuss its future after oversight of all the charter schools is transferred back from the state in summer of 2018. After Lewis finished explaining that under the new system, the charter boards will run the schools and the Orleans Parish School Board will set standards for them, he opened the meeting up for questions — including several from a group of more than a dozen parents and children wearing shirts with the “Our Voice/Nuestra Voz” logo.

The Nuestra Voz speakers all asked their questions in Spanish through a translator provided by the School Board. The first asked how much money is being spent on teaching English as a second language, information she said Nuestra Voz has been requesting for four months.

The School Board funds every charter school based on its population using a set amount of money per student, Lewis replied. Certain groups of students — including those in special education or gifted programs and English-language learners — are weighted more heavily in the funding formula, because they typically require more money to teach.

Another parent asked the school officials how they can guarantee the rights of students — not only the right to receive materials in their native language, but also the right to be protected against bullying or discrimination while at school.

The Orleans Parish School Board has drafted a new policy affirming the “principle that undocumented childrenhave a right to receive a free public education [and] declaring schools to be safe zones for all students.” The policy designates that “schools are a place for students to learn and to thrivesuch that immigration issues or concerns do not interfere with their learning experience,” and Lewis said it is set for a final vote next month.

“Families that come into our schools, they need to know that’s a safe place,” Lewis said.

Meanwhile, anyone who is a victim of bullying should talk to their individual school’s administration first, or the OPSB district office if they aren’t comfortable talking to the school. The OPSB website even has a form to report bullying, and they will investigate it from there, Lewis said.

Some of the group’s other concerns were similar to those of other parents. Several people, both from within the Nuestra Voz group and apart from it, raised concerns about the buses. Not every school even offers buses, and those that do often don’t have air conditioning, they said.

Lewis said that providing buses is up to the individual charter schools, but that the OPSB is working to encourage more of them to provide transportation. Charter schools authorized through the state, meanwhile, are already being required to move to a mandatory busing system.

Kleban added that he “absolutely” would advocate for air conditioning on buses, and promised to work with the board for a plan by next summer.

“I don’t think it’s healthy for children to be riding in conditions that are not healthy and not humane,” Kleban said.

Others complained that schools rated C, D or F are not really “choices,” and asked how the OPSB can improve those schools rather than simply closing them and giving them to other operators.

Lewis replied that he believes the highest-scoring schools should be encouraged to open more campuses. This year, the highly-rated Warren Easton high school had 3,000 families apply for 300 seats in the freshman class.

“That alone says that we have a problem, and we need more high quality options for our families,” Lewis said.

The School Board is working to authorize more schools from proven leaders, but that takes time, Lewis said.

“There are some things we cannot just fix today,” Lewis says. “Some things, it’s going to be a process.”