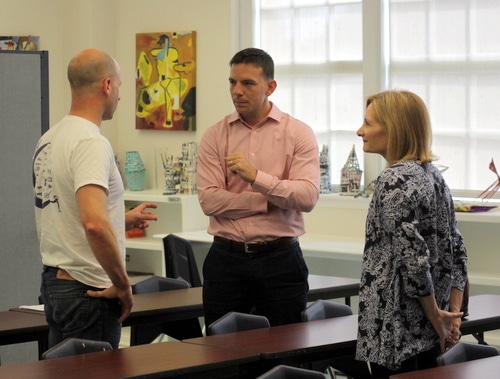 Lusher High School has a new principal for the 2017-18 school year, as its founding leader moves into a support role within the Lusher administration.

New principal Steve Corbett, a former teacher and administrator at Lusher High School who has spent the last several years leading schools in New York, briefly introduced himself to the Lusher’s governing board during their first meeting of the school year Saturday morning.

Corbett succeeds founding Lusher High School principal Wiley Ates, who is remaining with Lusher in a full-time support role, CEO Kathy Riedlinger said. She said she and Ates began discussing the transition during the last school year, after decades of working together dating back to their time at John Dibert school in the 1970s.

“If I could have picked anybody I knew in the city of New Orleans to be the founding principal of Lusher High School, it would have been Wiley Ates,” Riedlinger recalled Saturday.

During the spring, she assembled a committee to evaluate potential candidates to fill Ates’ position, she said. In the meantime, she heard that Corbett’s family was eager to return to New Orleans from New York.

“I called him and said, ‘Don’t talk to anybody in New Orleans until you talk to me,'” Riedlinger said.

Corbett had been a social studies teacher at Lusher High School in the years soon after Hurricane Katrina, and then the campus dean of students until 2012. He left to serve as the founding principal of a new school in Harlem that fall, then finally spent the 2016-17 year at a school in Poughkeepsie, New York. During that time, he also completed his doctorate in education from Northeastern University.

After interviewing a number of candidates, Corbett was the committee’s unanimous choice, Riedlinger said.

“We are thrilled to have him back,” Riedlinger said.

In addition to his experience in the classroom and in the Lusher administration, Corbett has a particular interest in Lusher’s arts integration, and he also has been a strong supporter of the school’s fledgling athletic programs, Riedlinger said.

“He really comes with a lot of curriculum background with his doctoral training, ” Riedlinger said. “He knows Lusher and values the culture. He’s very collaborative in what he does and that fits right in.”

Major FEMA-funded renovations are now mostly complete on both campuses — except for some problems with the new windows at the high school that still need to be corrected — freeing the Parent-Teacher-Student Association to begin a list of improvements they have been waiting on, Riedlinger said. The administration’s major focus this year is Lusher’s transition to greater autonomy over financial reporting and special-education services.