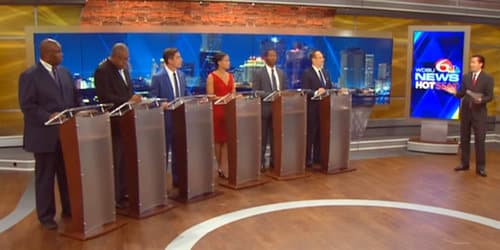 WDSU anchor Travers Mackel poses a question to the six candidates running for the District B seat on the New Orleans City Council. (screenshot via YouTube)

The entire field of candidates for the open District B seat on the City Council support the removal of both red-light cameras and Confederate monuments, and also reacted to one candidate’s admission of a past opioid addiction in a recent televised debate.

Like in District A a week earlier, the WDSU “hot seat” debate moderated by Travers Mackel covered a lot of ground with the District B candidates in a short time. Unlike the District A debate, however, the 20-minute segment did less to highlight differences between the candidates and more to put them on the record on areas of shared agreement.

All six candidates for the seat — Jay H. Banks, Eugene Ben, Seth Bloom, Catherine Love, Timothy David Ray and Andre Strumer — said they oppose the use of red-light traffic cameras to generate ticket revenue in what Mackels posed as a yes-or-no question.

“I would support taking them down immediately,” Strumer said.

Likewise, all six said they supported the city’s decision to remove four Confederate-era and white-supremacist monuments, though Bloom noted that he “evolved on the issue.”

“This is an issue the mayor basically has looked at, and the people have spoken,” Ben said.

Banks, Ben, Love and Ray all gave Mayor Mitch Landrieu a ‘C’ letter grade on his leadership of the city, while Bloom and Strumer both rated him much higher, a B+. As to their top priority in office, Ray and Ben both said they would promote housing affordability, Bloom and Love both said slowing the loss of police officers to improve public safety, Strumer said “prison re-entry programs” and Banks said oversight of the Sewerage & Water Board.

The candidates also had a chance to give their reaction to the recent admission from Bloom that he struggled with an addition to prescription painkillers while serving on the Orleans Parish School Board. Mackels asked Bloom if he admitted to the problem “to get ahead of it, so no one could use it against you on the campaign trail.”

“I wanted to people to know that there’s people out there suffering, and there’s resources out there, like the Odyssey House,” Bloom said. “I wanted to help spread the public word about this.”

Love said overcoming addiction is a “tremendous feat” under any circumstance, and commended Bloom for doing so.

Other candidates agreed drug addiction is a social problem all over New Orleans. Ben described it as a part of people’s everyday lives all over District B.

“We definitely need to have more treatment facilities available, but not just for people that are affected by opioids,” Banks said. “Drugs have affected this community for decades.”

“We need to address the mental health issues that are surrounding us, and not have a stigma attached to them,” Strumer said.

Ray suggested that the City Council could do more to help fund effective programs like the Odyssey House.

To watch the debate in full, see the WDSU video on YouTube below: