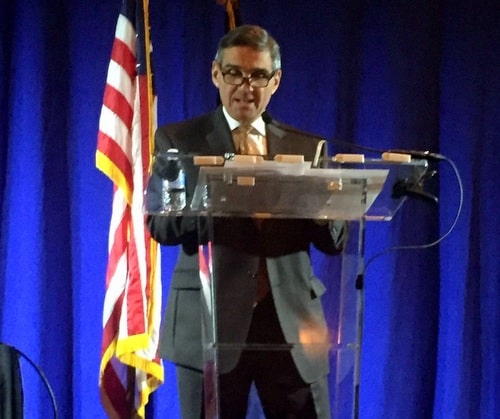 In remarks delivered at the Criminal Justice Conference on Sexual Assault yesterday, District Attorney Leon Cannizzaro blasted New Orleans city leaders for “working from the Neville Chamberlain manual of war planning.“ Great Britain’s prime minister from 1937 to 1940, Chamberlain was often blamed for failing to prepare the county for World War II and associated today with a policy of appeasement that allowed Nazi Germany to grow strong.

Cannizzaro has been in a battle with Mayor Landrieu and the City Council regarding a crippling 10 percent budget cut ($600,000) his department took in the city’s 2017 budget. Cannizzaro says the budget cuts are making it more difficult for his office to try and successfully win cases, especially those that require more financial resources.

Cannizzaro cites as example this week’s court case involving Christopher Smith who beat California tourist Doug David so savagely that David is permanently paralyzed. If David’s frail health had allowed him to attend the trial, the costs would have included caregiver expenses. Instead, David could not testify and Smith only received a suspended sentence. In the highly publicized Bourbon Street shooting case, witnesses were brought in from across the country and from Australia which helped the DA obtain a guilty verdict.

“Without full funding it puts a lot more pressure on us,” Cannizzaro said. “But our staff members are sticking around and taking on additional responsibilities.”

“This is the part of the speech where I’m supposed to tell you that city leaders are aware of the problem and are aggressively formulating a strategy to bring the fight to the violent criminals who are presenting turning the city of New Orleans into a shooting gallery — but it just isn’t so,” said Cannizzaro to conference attendees.

Crime got off to a fast start in January 2017 with more than twice the 2016 number of people killed or wounded by gunfire. If that pace continues, New Orleans could have one of the most violent years in recent history. Both nonfatal shootings and homicides increased in 2016 with 133 incidents for every 100,000 citizens. Murders committed by individuals brandishing guns were also up 5 percent last year with an average of 50 gunshot victims each month.

Cannizzaro can rationalize Landrieu’s desire to put more police resources on the street in an effort to deter and detect crime. Yet he questions Landrieu’s real commitment to prosecuting violent criminals. “I’m disappointed by the almost defeatist attitude on the part of the City’s administration. They are putting a lot of money in arresting criminals but not in prosecuting criminals. It’s very important that the police go out there and make good cases utilizing the latest technology.”

Yet, if Cannizzaro lacks the resources to adequately prosecute all the cases because of staffing and budget issues, the effort falls “far short of getting violent criminals off the street.” Cannizzaro says the situation is a cautionary tale of America’s failed urban policy that includes more arrests but fewer prosecutors. “This debate is about a lot more than $600,000. Funding is the best expression of policy and priorities,” explained Cannizzaro.

Let’s see what impact this year’s new spike in crime will have on policy and priorities during our upcoming election cycle.

IS INSPECTOR GENERAL ED QUATREVAUX BEING PUSHED OUT BY LANDRIEU?

With one year still left in his current term, why did the Ethics Review Board decide to launch a nationwide search to replace Inspector General Ed Quatrevaux? Quatrevaux had been praised by the review board and was given a $5,000 raise last year. Quatrevaux is well respected within his industry. Many community organizations appreciate the investigatory work Quatrevaux has done. Sure, he’s not perfect and can suggest imperfect solutions to tough problems, but that kind of goes with the territory.

What this inspector general has not done is be a friend to the mayor – which may well be at the root of his problem. It seems that some of Landrieu’s buddies out there in the community as well as his top appointee to the board, chairman Allen Miller, could be behind the nationwide search. Landrieu appoints the other ethics review board members as well but selects them from a list provided by the city’s university presidents.

One expert says that inspector generals often stick together. Therefore, few experienced candidates are expected to apply for the IG position at this time. Meanwhile, Quatrevaux and his team will probably continue to push out worthy reports. If a study shows that Quatrevaux should be replaced, let the next mayor have that honor.

The Orleans Parish Democratic Executive Committee is the next group that has scheduled its endorsement meeting Wednesday evening at 6 p.m. at Civil District Court. OPDEC will interview candidates for open seats on the Fourth Circuit Court of Appeals and Civil District Court.

Danae Columbus, who has had a 30-year career in politics and public relations, offers her opinions on Thursdays. Her career includes stints at City Hall, the Dock Board and the Orleans Parish School Board and work for City Council members Stacy Head and Jared Brossett, Foster Campbell, Lt. Gov. Jay Dardenne, former Sheriff Charles Foti and former Councilwoman Cynthia Hedge-Morrell. Her current clients include judicial candidates Suzanne Montero and Paula Brown.